The treasures awaiting a visit in the Galilee

Find out why you’ll want to put the Western Galilee on your itinerary next time you’re in Israel.

Inside a round Ethiopian mud gojo hut, we stand in a circle shaking our shoulders in rhythm to ethnic music, and then tuck into traditional treats prepared by our hostess, Yoney Skiba: flat spongy injera bread with spicy lentil, chickpea and avocado dips; fragrant coffee and tea; and daba, a loaf made of whole grains and fruits according to a family recipe.

Skiba has recreated the home she remembers before her family fled Ethiopia on foot when she was eight years old, heading for the Jerusalem of their dreams. Today she is a mother and grandmother living on a kibbutz in the Western Galilee, and supports herself by offering visitors an authentic Ethiopian experience without leaving Israel. (Information: +972 (0)77-996-4470; mavrhatey@gmail.com) 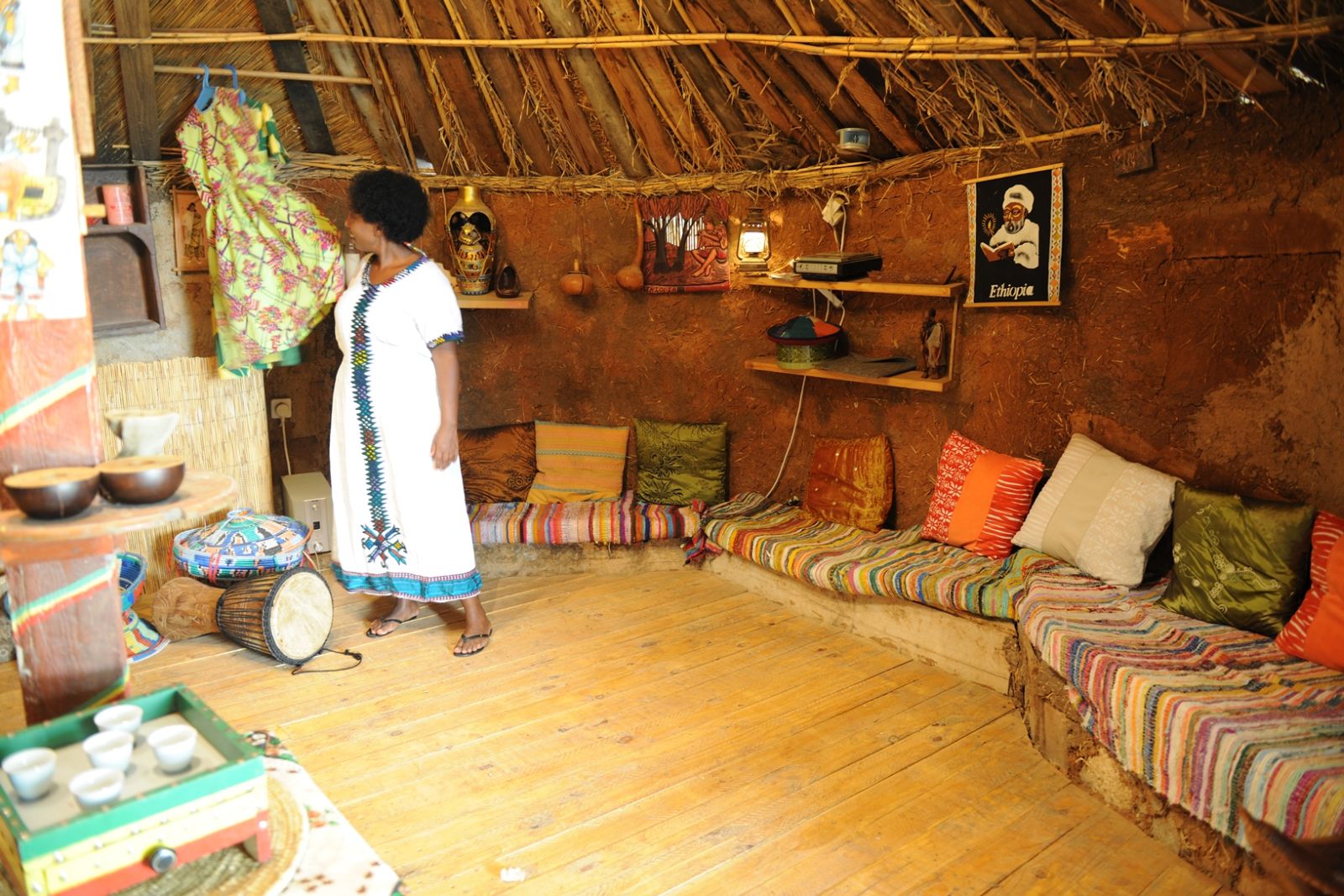 Yoney Skiba offers many hands-on activities in her recreated Ethiopian hut on Kibbutz Evron. Photo courtesy of Treasures of the Galilee

Nearly all the visitors to Skiba’s gojo at Kibbutz Evron are Israeli. However, the four-year-old Treasures of the Galilee (Ozrot Hagalil) philanthropic initiative, which promotes Skiba and 400 other Western Galilee tourism sites, now aims to introduce more overseas tourists to this verdant, history-saturated and culturally diverse part of the country. The website was recently translated into English for this purpose.

Over a brunch of fresh goat cheeses, herbed omelets, roasted vegetables and other kosher delicacies at the family-run Alto Dairy Visitors’ Center and Restaurant on Kibbutz Shomrat, ISRAEL21c recently joined members of the foreign press in learning more about Treasures of the Galilee before visiting a few participating sites. 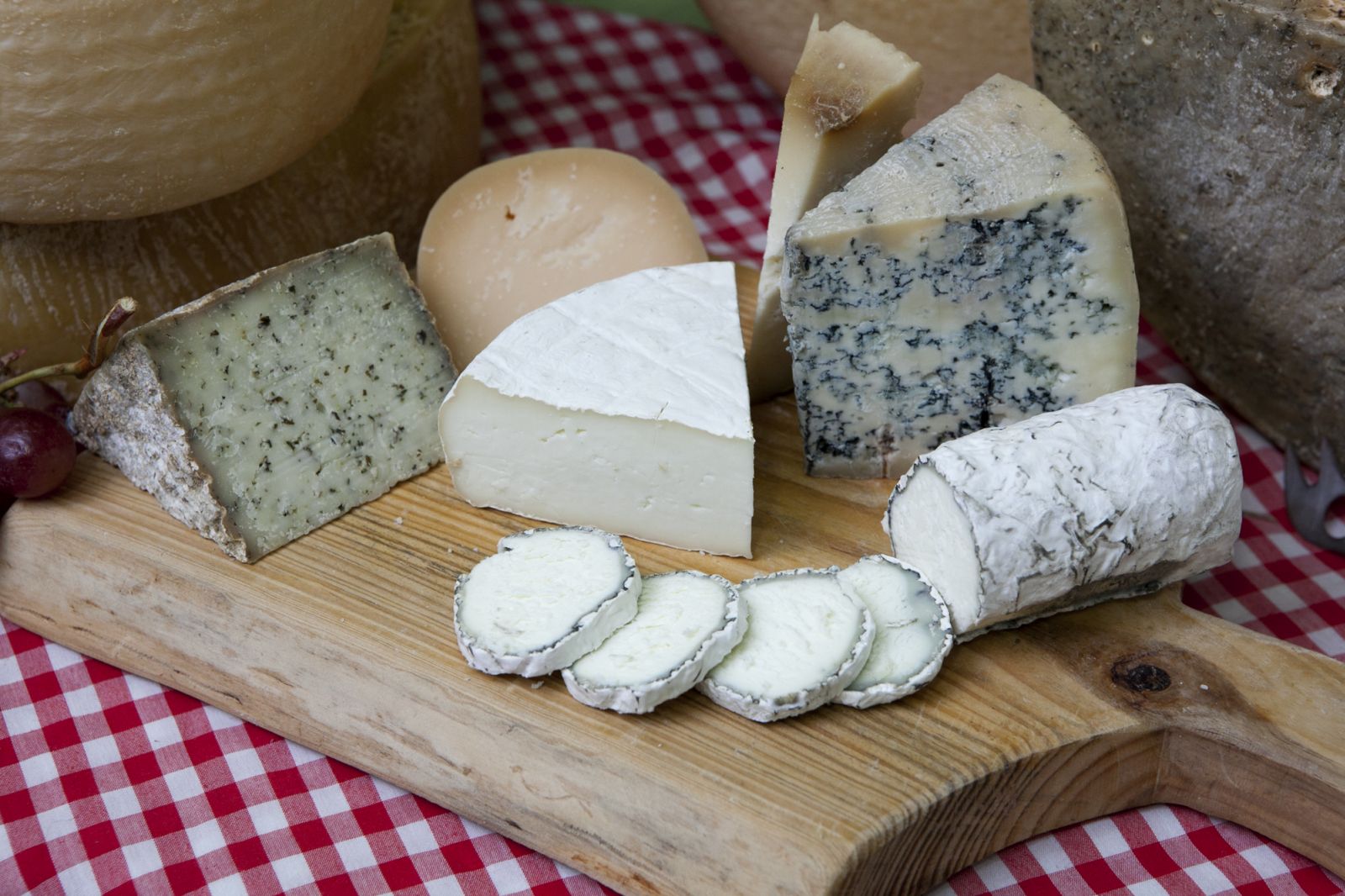 Products of the Alto Dairy at Kibbutz Shomrat. Photo courtesy of Treasures of the Galilee

Yariv Hameiri, CEO of Treasures of the Galilee, explained that this non-profit tourism-boosting initiative was started by Israeli businesswoman and philanthropist Raya Strauss Bendror, who was raised and still lives in the Western Galilee city of Nahariya.

The Strauss Group, the largest food-and-beverage company in Israel with 14,000 employees in 20 countries, had its modest beginning in the yard of Strauss Bendror’s parents, German immigrants who scraped together enough money to purchase two dairy cows in 1936. Treasures of the Galilee is Strauss Bendror’s way of giving back to the region that nurtured her.

Many travelers are familiar with Western Galilee landmarks such as the grottoes of Rosh Hanikra and the Mediterranean beach at Achziv National Park. While not excluding such sites, Strauss Bendor wanted to expose a wider array of experiences.

“Our main asset here is the tapestry of cultures, and this is what we are trying to elevate,” says Hameiri. “In the first three years since we launched, we increased domestic tourism to this region by 60 percent, and that has a tremendous impact. We are starting our baby steps in international tourism.” 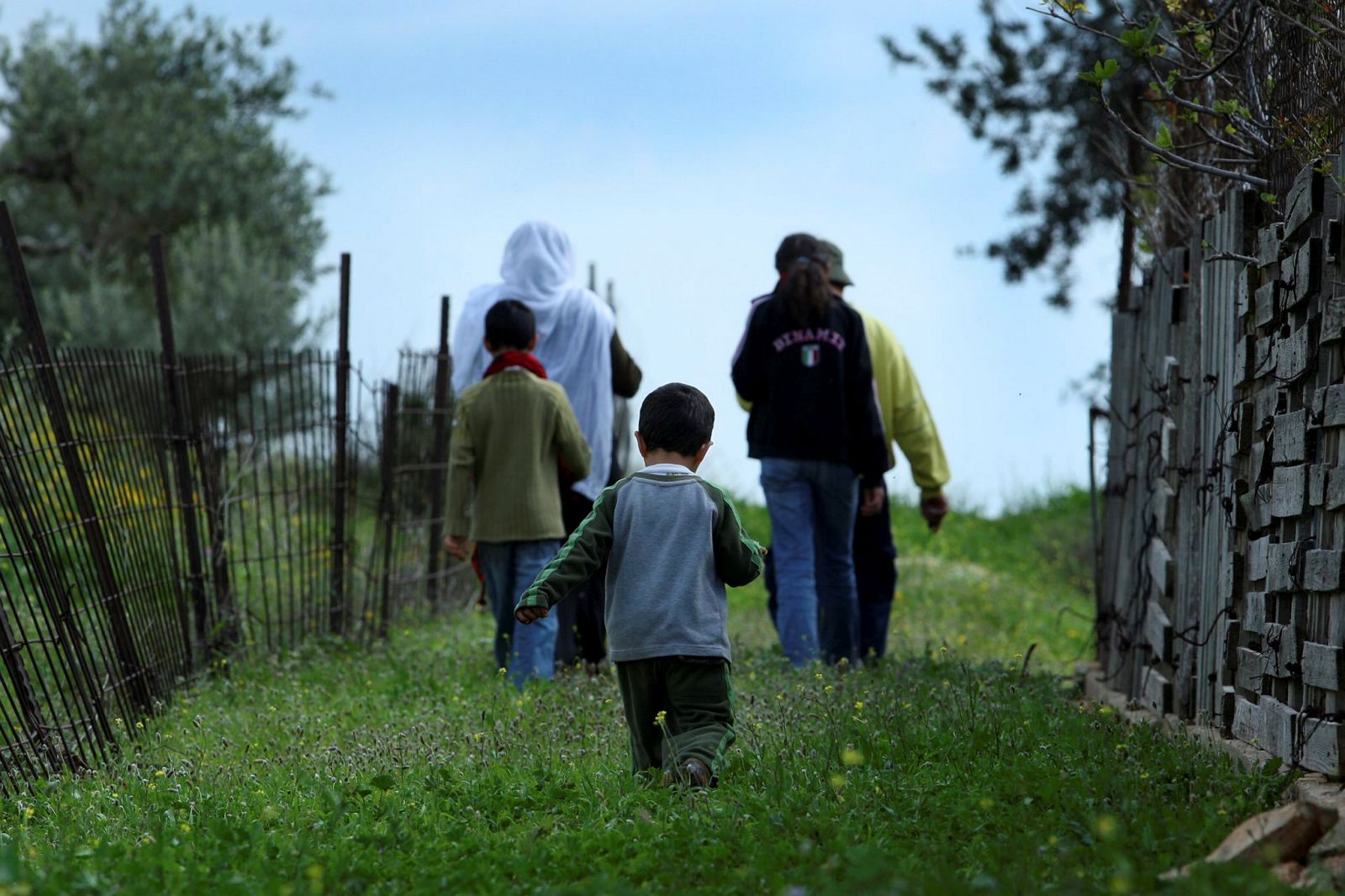 A beautiful life together

Among many mom-and-pop ventures supported by the organization is the Mizal family in the 180-year-old Bedouin village of Arab al-Aramshe on the Lebanese border.

The scenery on the winding uphill road to Arab al-Aramshe is breathtaking, passing by Adamit Park and the Keshet (Arch) Cave. 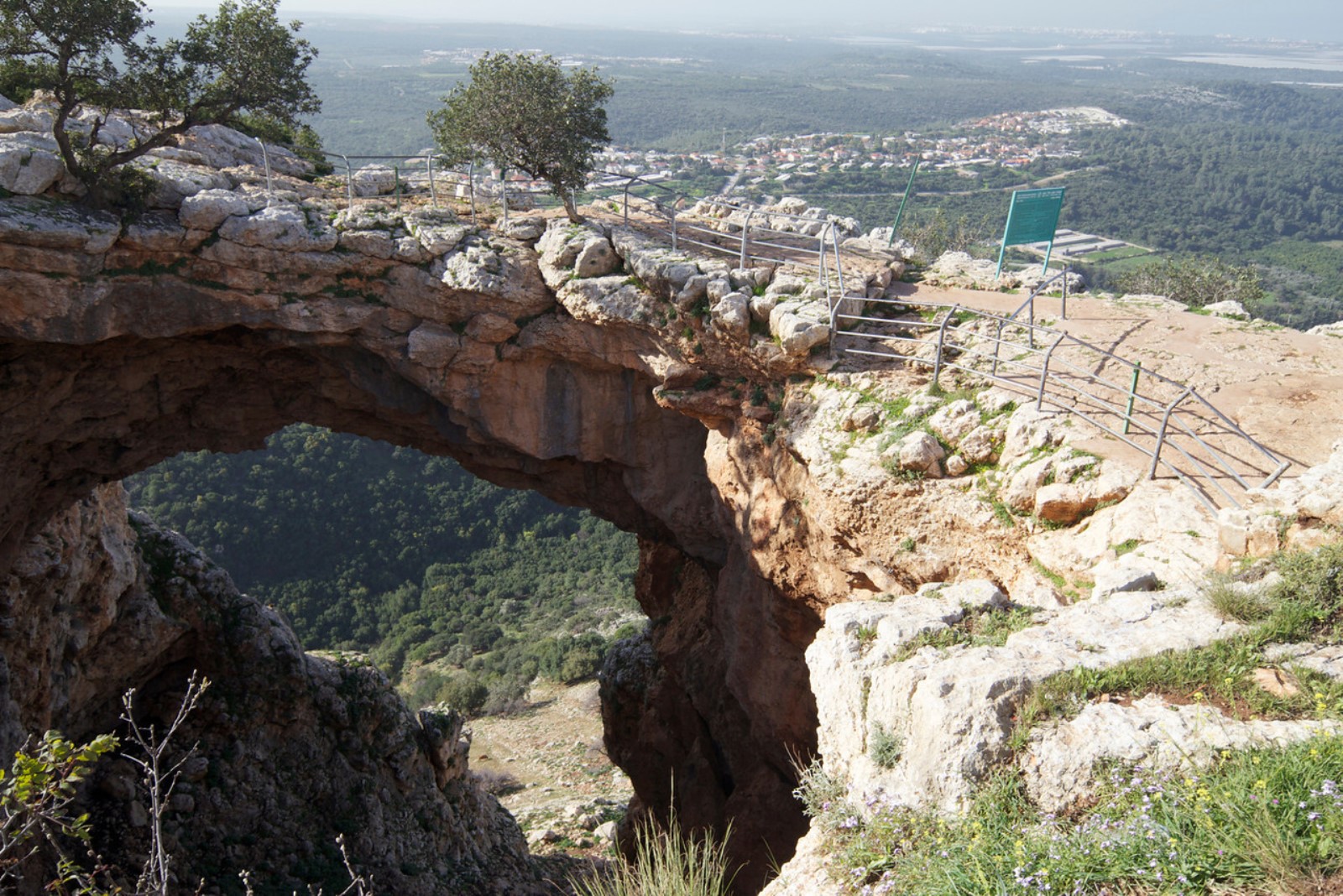 Adamit Park near the Lebanese border. Photo courtesy of Treasures of the Galilee

Muhammad Mizal explains that half of the village ended up on the Lebanese side after the British and French arbitrarily set the borderline in 1949. The people on either side of the UN fence have not been able to visit one another (except in cyberspace) ever since.

Unlike most Bedouin villages of tents and shacks disconnected from modern infrastructure, Arab al-Aramshe looks like any rural town with sizeable houses, paved streets, shops, schools, clinics and other amenities supported and serviced by the Israeli regional council. 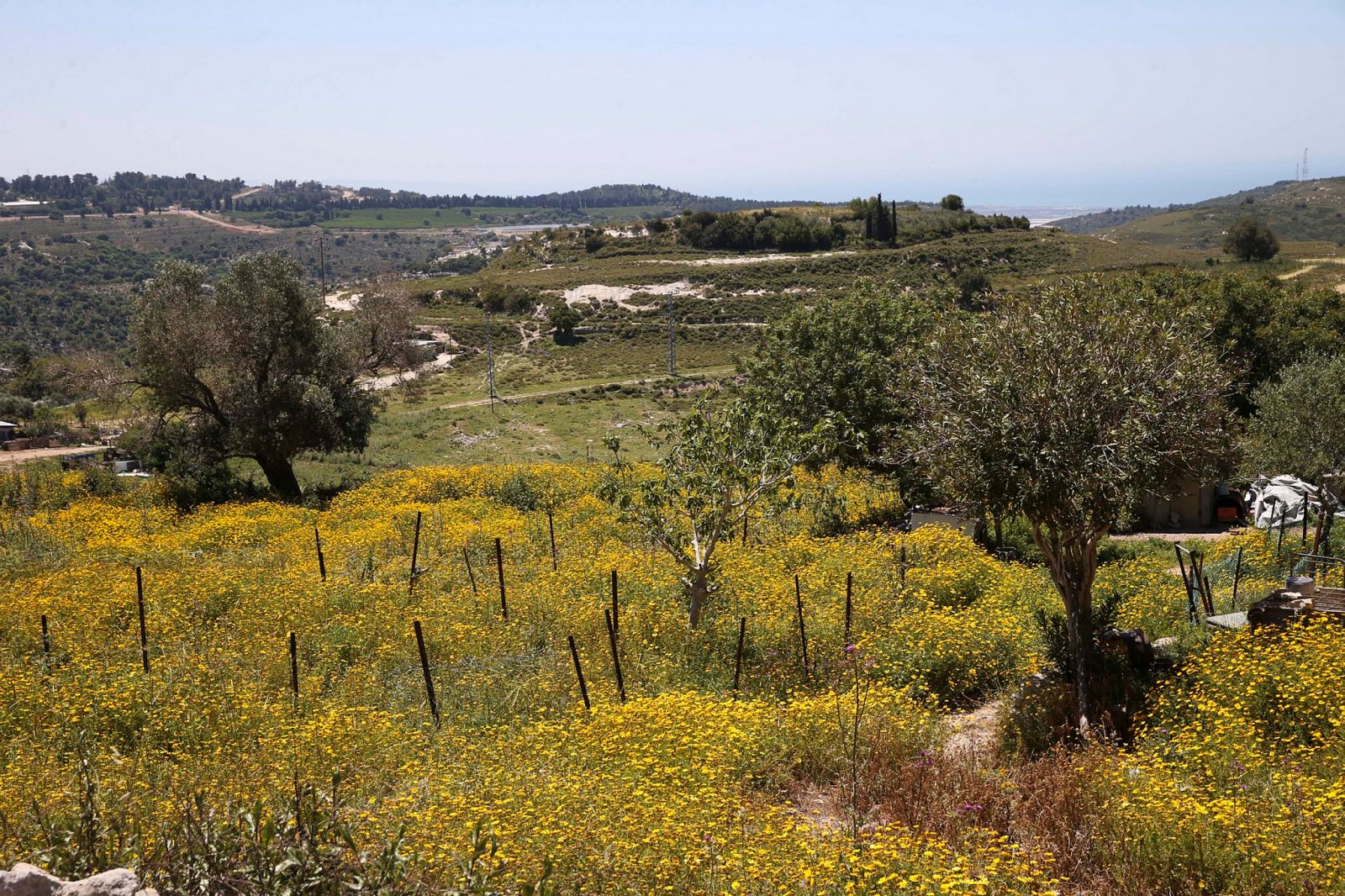 Mizal relates that the close relationship between Arab al-Aramshe residents and the surrounding Jewish kibbutzim and moshavim (agricultural collectives) dates back to the arrival of Eastern European pioneers in the late 1920s.

“We can be a model for good, peaceful living in Israel and the whole region,” he says, adding that male residents of his village serve in the Israel Defense Forces. “We have a very beautiful life together.” 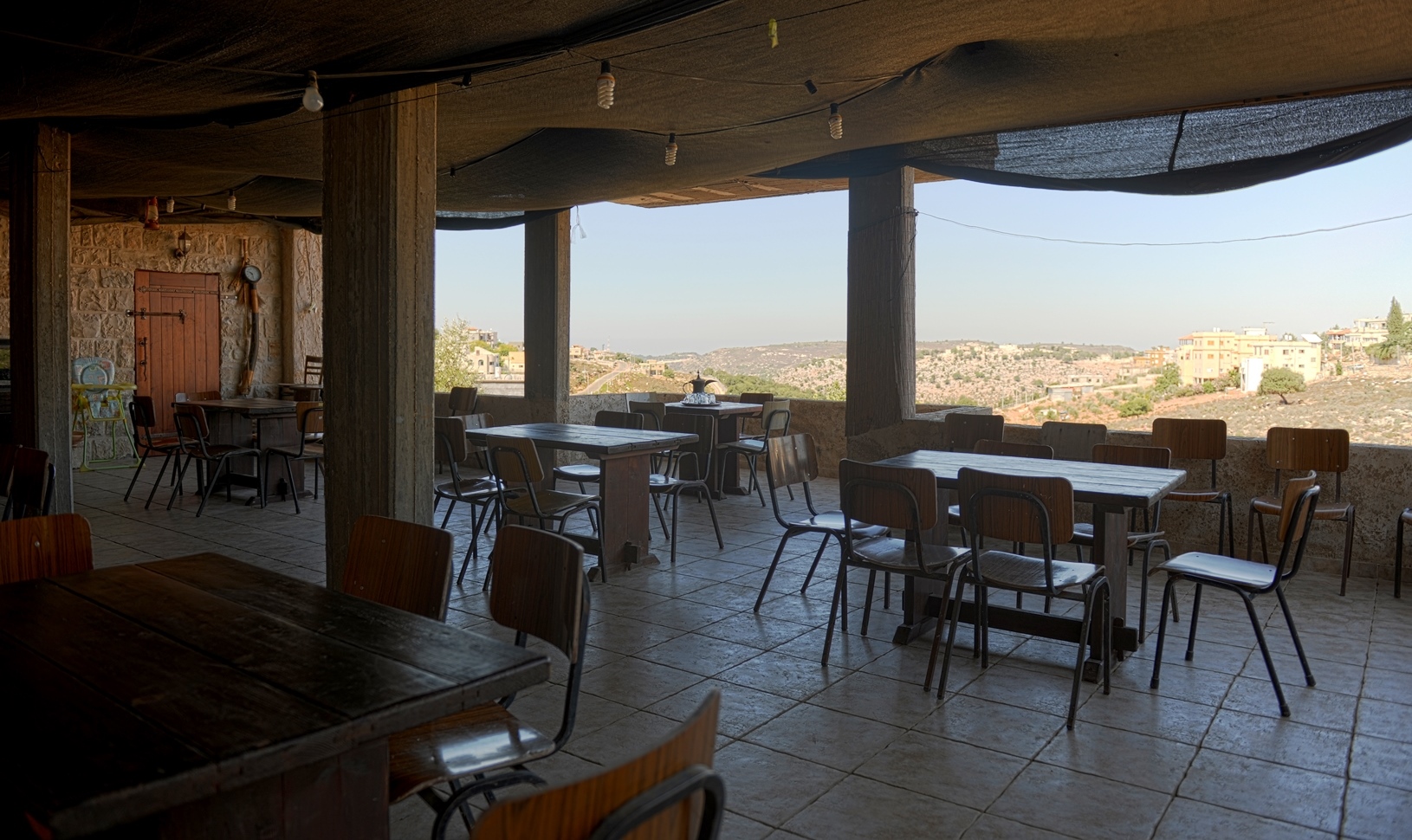 The Mizal family’s terrace in Arab al-Aramshe, a Bedouin town near Israel’s Lebanese border. Photo courtesy of Treasures of the Galilee

One of the more well-known cities in the Western Galilee is Acre (Akko), a historic walled port city and UNESCO World Heritage Site with continuous settlement from the Phoenician period.

An unusually integrated city, Acre has 36,000 residents, about one-third of whom are Arab Muslims and Christians. More than 40 churches were built here during the Crusader era along with other grand palaces and structures.

A small percentage of the 12-century Crusader city in Acre, hidden beneath the Ottoman Empire city built in the 18th century, was excavated and transformed into a $4 million tourist site, Knights Hall, opened in October 2014. 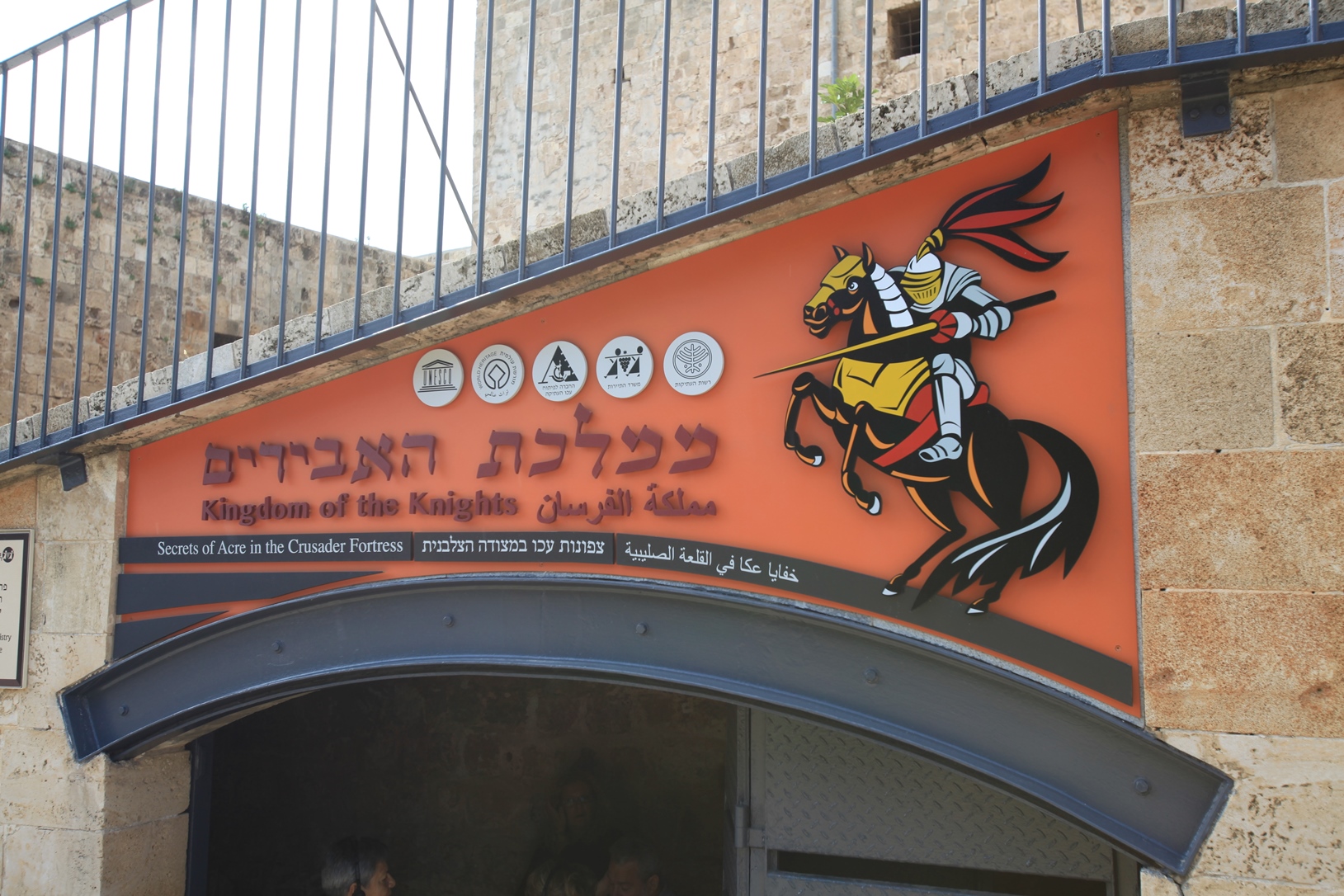 Knights Kingdom in Acre. Photo courtesy of Treasures of the Galilee

The compound provides a historic window on Crusader times in the Holy Land, including Knights Kingdom, where visitors can enjoy a medieval-style (no cutlery!) banquet served by singing waiters dressed in period costume, followed by a jousting tournament in the nearby hippodrome. (Reservations: +972 (0)4-995-6706/7/8 or batshebab@akko.org.il)

Inside the excavated halls of the Hospitaller Fortress are audiovisual displays and restored artworks, as well as cooperative shops selling and demonstrating crafts such as pottery, leatherwork, glasswork, soap-making and basket-weaving. 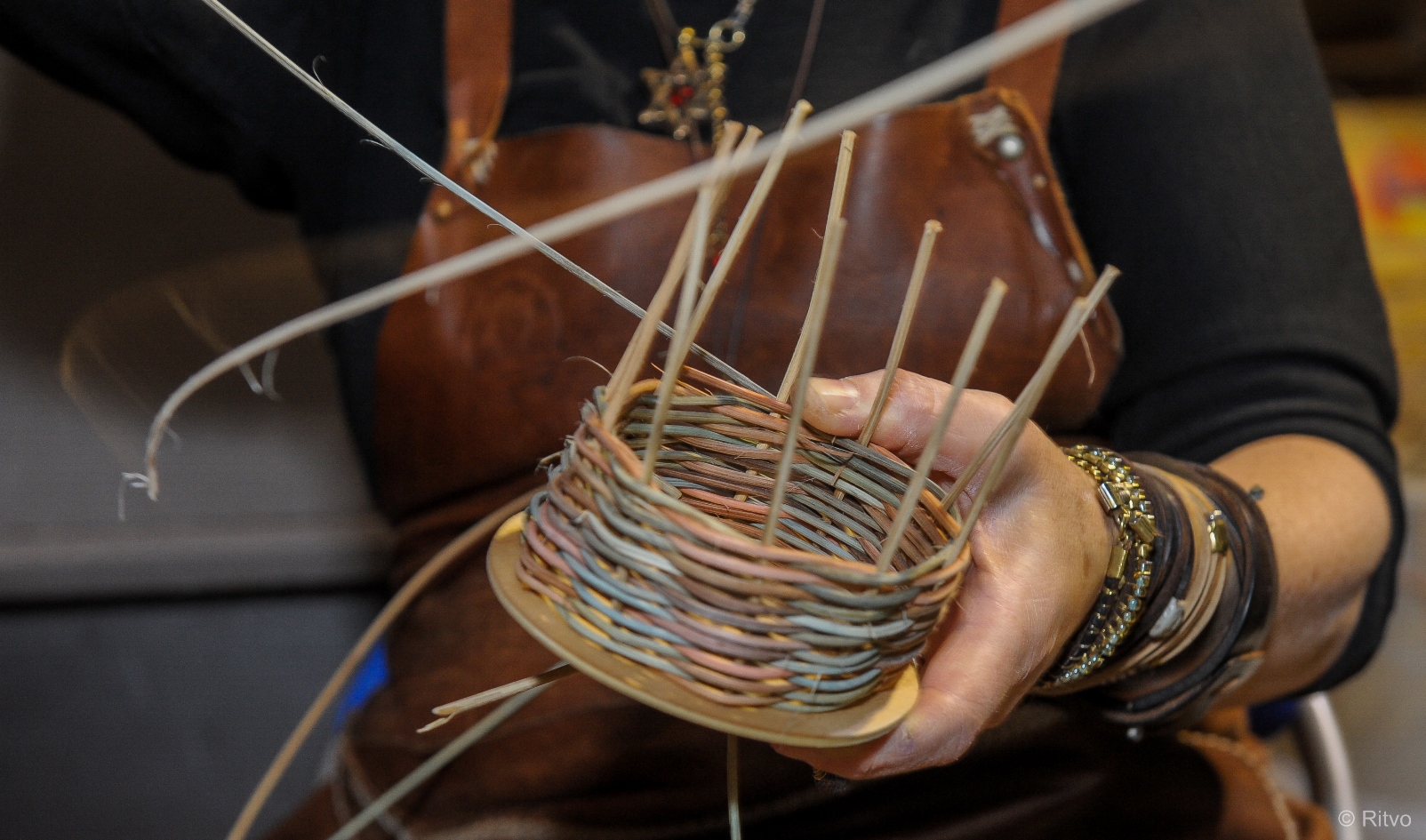 Sima Oren with one of her creations in progress at the Knights Kingdom in Acre. Photo courtesy of Treasures of the Galilee

She sees her enterprise as an exemplar of harmonious coexistence in Acre.

“My dream was to connect Jewish and Arab women together by weaving,” says Oren. All Salima products, made from reeds of olive and date trees, come with a card that says: “It is our belief that together with our unique aspects of culture and religion we can create peace, like the basket. The weaving together of different materials can make something whole.”

Another major attraction in Acre is the Bahá’í Gardens. It’s smaller and less well-known than its sister stepped gardens in Haifa, but Acre is the actual center of the Bahá’í Faith, one of the world’s newest religions.

The Old City of Acre is home to several international cultural festivals: The Israeli Opera Festival, which will take place July 20-28, 2016; the International Harp Concert every November; and the International Fringe Theater Festival during the Sukkot holiday. 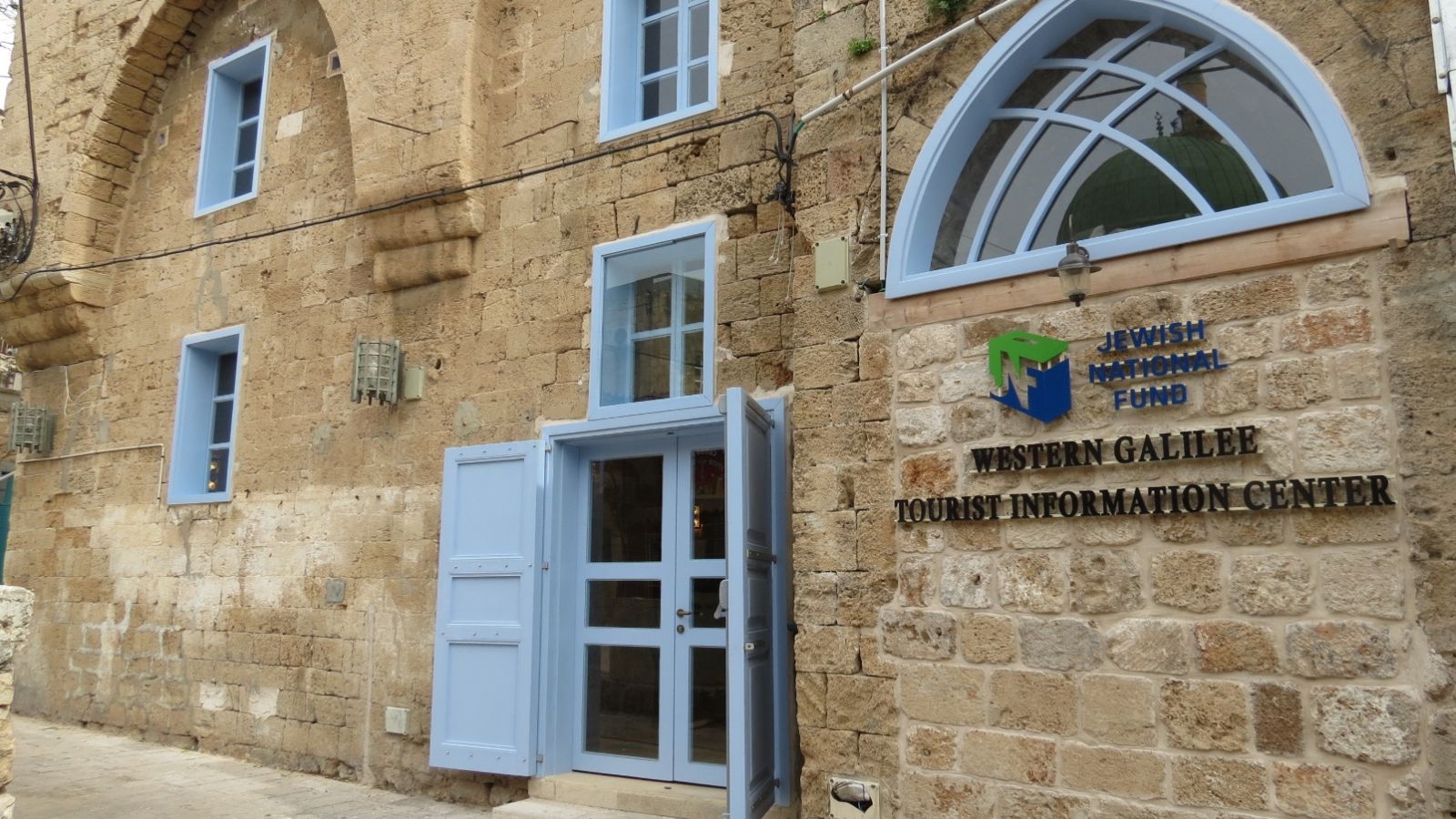 Tourists have a new information center in Acre to help them plan their itinerary in the ancient city. Photo by Rinat Adler/JNF

A new $1 million tourist information center in the marketplace of the Old City of Acre, built by the Jewish National Fund, gives information in several languages about Western Galilee businesses and area highlights such as hiking trails, culture, art, entertainment, restaurants and hotels.