Winners of a tourism contest to stay in the beachfront luxury suite replete with butler, room service and perfect sea views.

Carrying a suitcase over a sandy beach may not sound like much fun but for the winners of an online contest run by the Israeli Tourism Ministry and the Tel Aviv-Yafo Municipality, it is worth the effort. After all, it’s not every day visitors to Israel get to stay in a lifeguard tower that has been converted into a five-star hotel.

The international campaign #TAKEME2TELAVIV invites tourists to enjoy a unique experience in the city.

And really, what is more unique than staying a night in a converted lifeguard hut that is now a luxury suite replete with butler, room service and perfect views of the Mediterranean Sea?

And really, what is more unique than staying a night in a converted lifeguard hut that is now a luxury suite replete with butler, room service and perfect views of the Mediterranean Sea? The popup hotel is steps from the water at Frishman Beach, Tel Aviv. Photo by Guy Yehieli

The Tourism Ministry and municipality — in cooperation with hotels.com — launched the international contest in February by calling on would-be visitors to upload a photo of themselves, wearing beach gear that they would bring with them, and taken against the background of their hometown, carrying a sign that reads #TAKEME2TELAVIV. 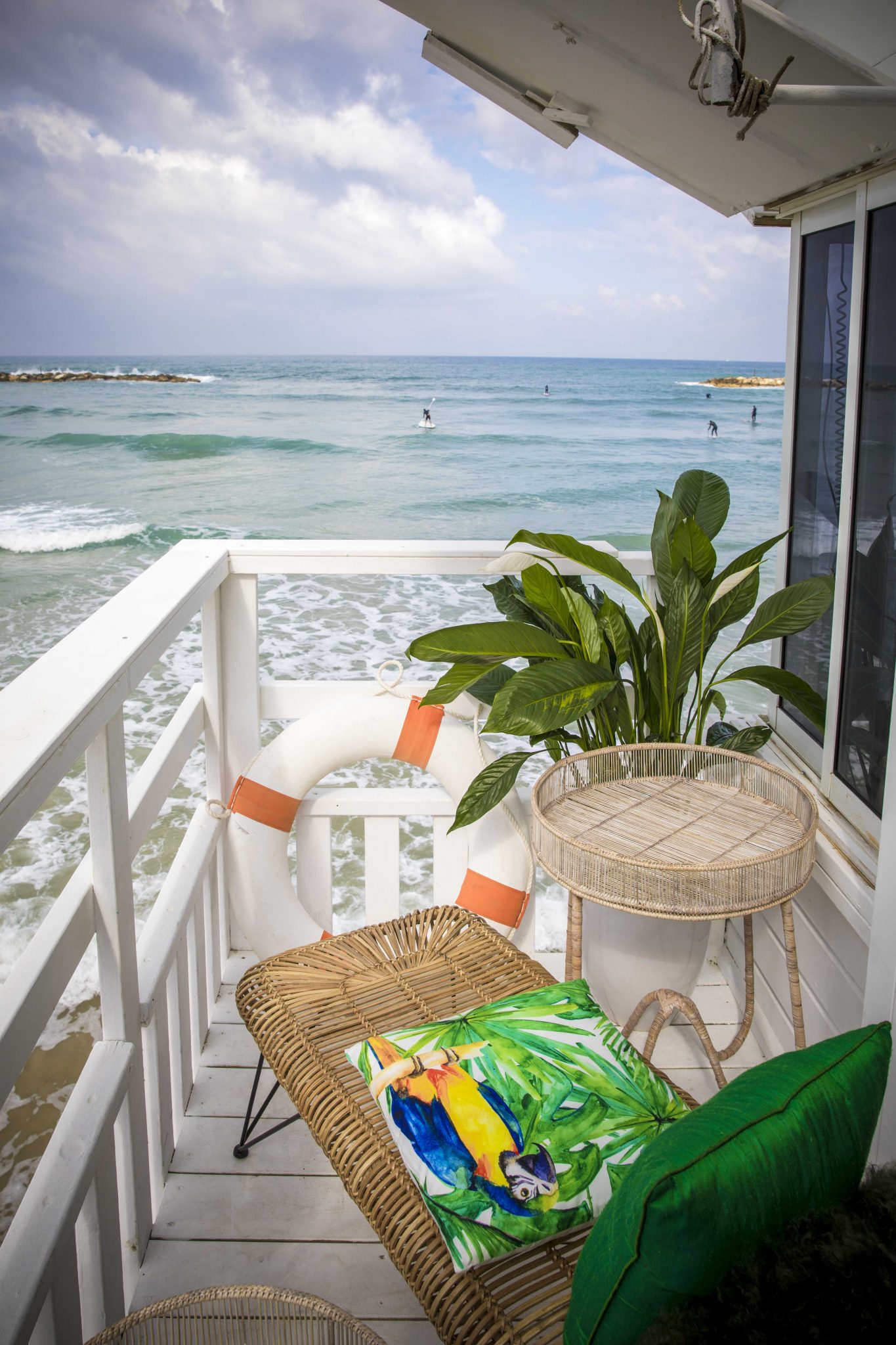 The popup hotel even has an outdoor sitting area with a fantastic view of the beach. Photo by Guy Yehieli A designer from Brown Hotels Urban Collective decorated the inside of the popup hotel suite in a lifeguard tower on Frishman Beach, Tel Aviv. Photo by Guy Yehieli

Fifteen couples were chosen as winners and from March 14 to April 4, they’ll take turns staying in the pop-up suite on Frishman Beach. The winners get free flights to Israel, one night in the lifeguard tower hotel and two nights in a Brown Collection Hotel.

German bloggers Sandra Lechner and Izabella Meczykowska from the website Beach Inspector are the city’s first guests at the first pop-up hotel of its kind in the world. “As with other areas, so it is with tourism in the city of Tel Aviv-Yafo – it was and always will be creative and groundbreaking. This lifeguard tower is an amazing opportunity to come and enjoy the city and our wonderful beach. I am sure that the guests in the lifeguard tower will share their impressions of the city with their friends all over the world,” said Mayor Ron Huldai at the official opening of the beachfront digs on March 14. The view from the popup hotel on Frishman Beach is incomparable. Photo by Guy Yehieli

The goal of this joint initiative is to showcase Israel as a leading tourist destination in the winter and “shoulder” seasons.

According to Amir Halevi, the Director-General of the Ministry of Tourism there has been huge interest in the lifeguard tower campaign, which has received more than 300 million views and more than a million clicks since the campaign began. “Creativity is the name of the game in the world of marketing,” he said. The initiative is part of the Two Cities One Break  campaign that encourages tourism to Tel Aviv and Jerusalem.

The temporary lifeguard hotel in Tel Aviv will be taken down in two weeks. But for tourists who missed out on the Tel Aviv contest, there’s no need to fret. The popup hotel on Frishman Beach is stocked with luxury amenities. Photo by Guy Yehieli

Meanwhile, Israel’s incoming tourism figures rose some 20 percent in the first months of 2017 as compared to the same timeframe in 2016.

“The dramatic increase teaches us that Israel is seen as an attractive and varied tourism destination,” said Tourism Minister Yariv Levin.