Reaching from 28 stories to 100 stories, these Tel Aviv towers will create a new look for the skyline of the Nonstop City.

The skyline of Tel Aviv is punctuated by many gleaming high-rises offering a view of the sea. If you gaze across the horizon, you’ll also see the cranes of construction crews working to build new towers meant for offices, residences and mixed use.

Many of these structures are truly striking works of architecture. Here we take a look at five exceptionally tall buildings in various stages of construction in the Nonstop City. 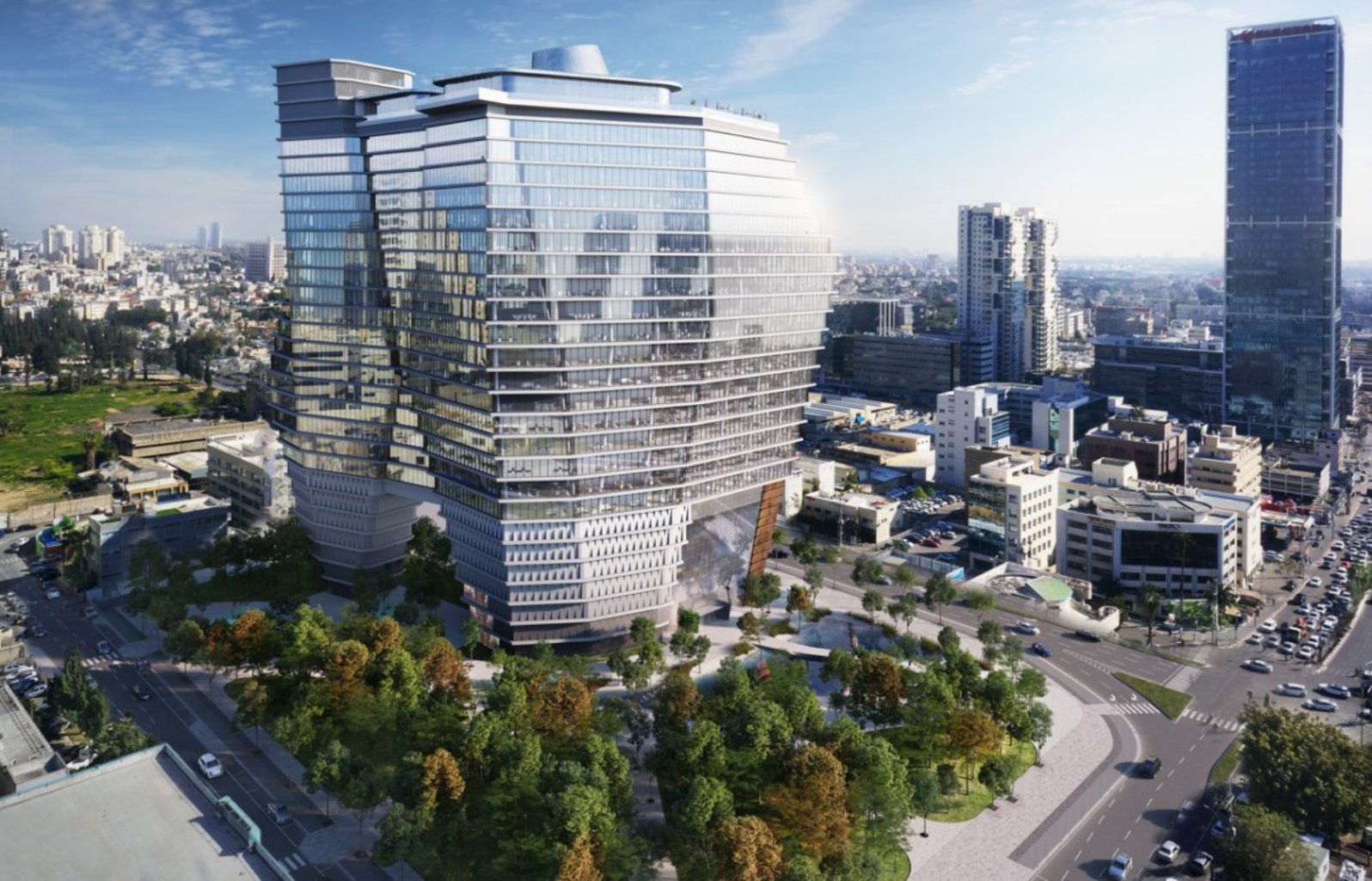 ToHa is a two-building complex being built in stages on 4.2 acres of land at the corner of Derech Hashalom, Yigal Allon and Totzeret Haaretz streets (ToHa comes from the latter street name, which translates roughly to Made in Israel).

The first building, to be completed by the end of this year, has 28 floors and is designed in the shape of an iceberg by Israeli native artist/architect Ron Arad of London, working with the local architect Avner Yashar.

The floor space measures 54,000 square meters. The lobby will be seven stories high. On the 26th story, the public will have access to a restaurant, promenade and landscaped terrace. The coworking network WeWork is leasing four floors of ToHa with an option for four more.

Asa Bruno, director of Ron Arad Architects, tells ISRAEL21c he is aiming for Platinum LEED certification for ToHa due to its “green” aspects modeled to respond to the specific water, wind and sun conditions in Tel Aviv.

“Because it’s larger on top, it self-shades so it’s efficient in terms of solar control, and there are passive devices to create climate comfort. All the services are in the legs that support the building – rather than on the roof — so they don’t need cooling. And we are planting more than 400 mature trees on site, much of the water for which will be recycled from the air-conditioning system,” says Bruno.

The second ToHa tower, still in planning, will have about 70 stories. 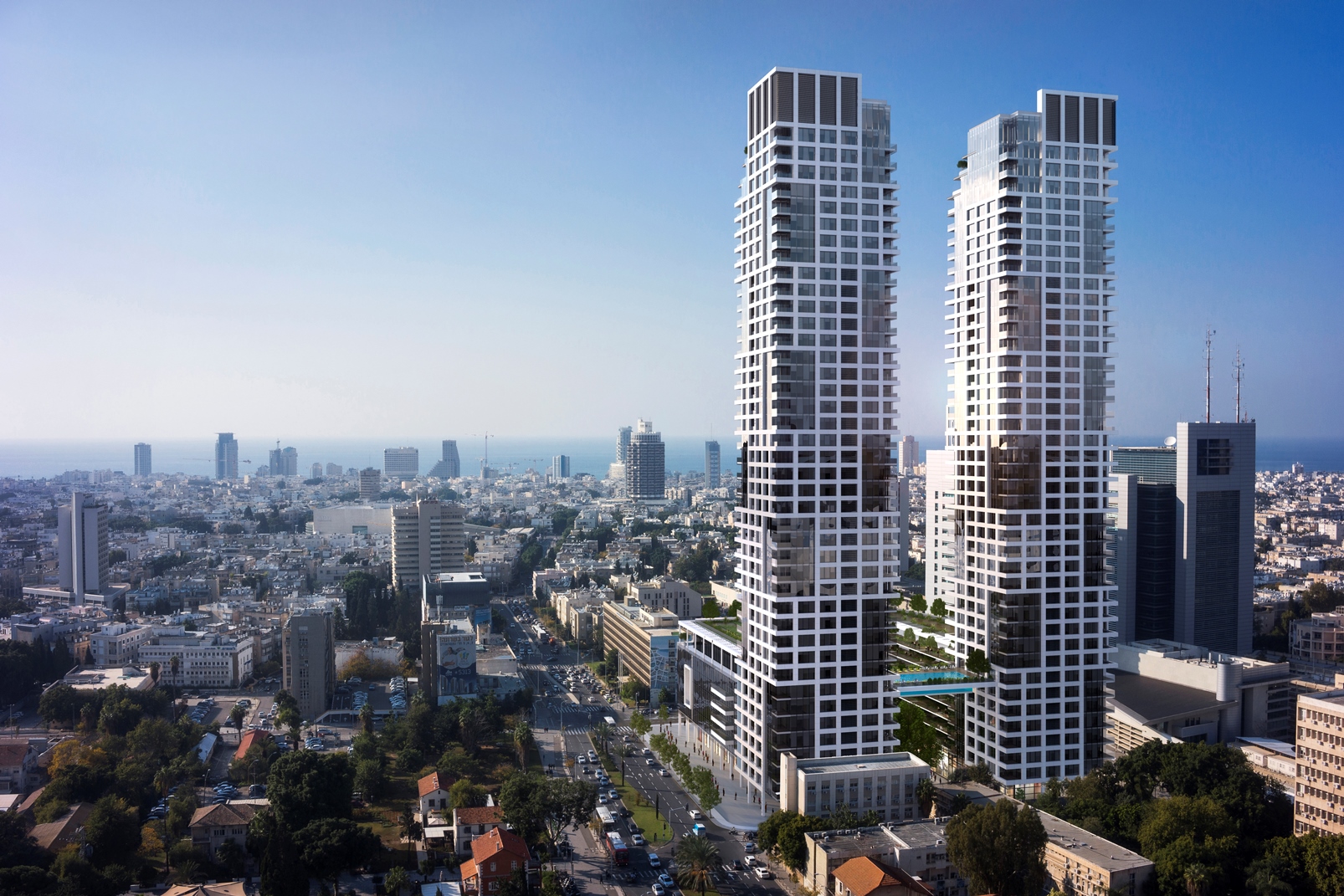 This 85,000-square-meter project beside Sarona Market at the corner of Da Vinci and Kaplan streets is planned to be completed in May 2022.

The plan combines a low-rise office, retail and public space structure with two 42-story residential towers containing 412 apartments, with a swimming pool, gym and spa in between.

In the office building, each office will open internally to shared balconies overlooking the ground-level public courtyard. From the street, the courtyard is accessed via a garden and three large entrances that lead to retail shops and lobbies servicing the office space above.

Designed by Yashar Architects of Tel Aviv (see above), Da Vinci’s facade is articulated by a grid pattern of intersecting white columns and beams that weave back and forth every five levels of the tower’s ascension. 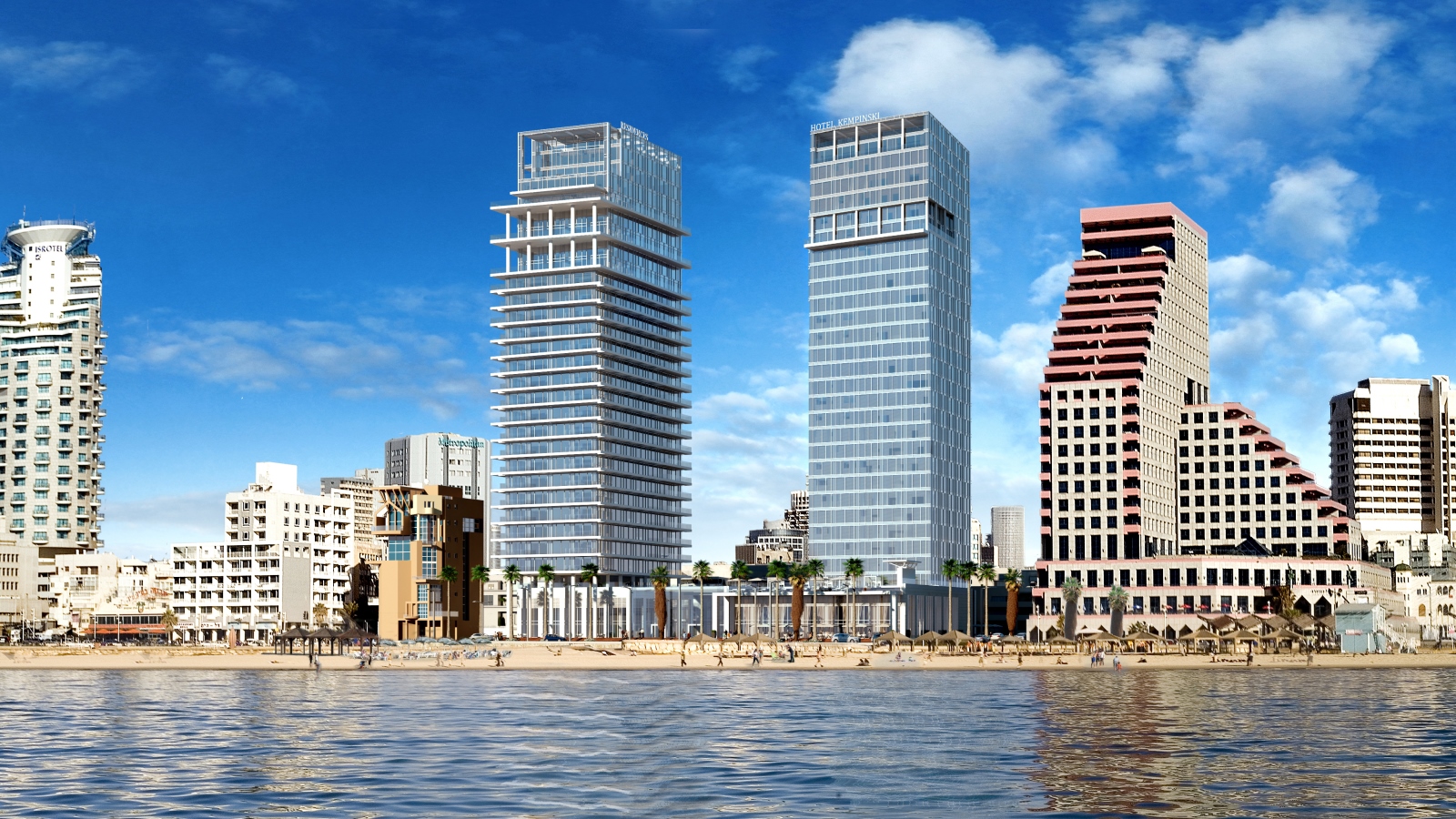 Due for completion in December this year, the David Promenade Residences were designed by Feigin Architects as a white aluminum-and-glass edifice embracing the natural light pouring in from the west over the Mediterranean Sea.

Terraces face both city and sea, while the building is outfitted with a private gym, sauna and swimming pool.

Owners of each residence will also have the use of 24-hour room service, maid service, ironing and laundry service, spa and swimming pool in the adjacent forthcoming Kempinski Hotel via an above-ground, cube-shaped glass walkway lined with artwork. 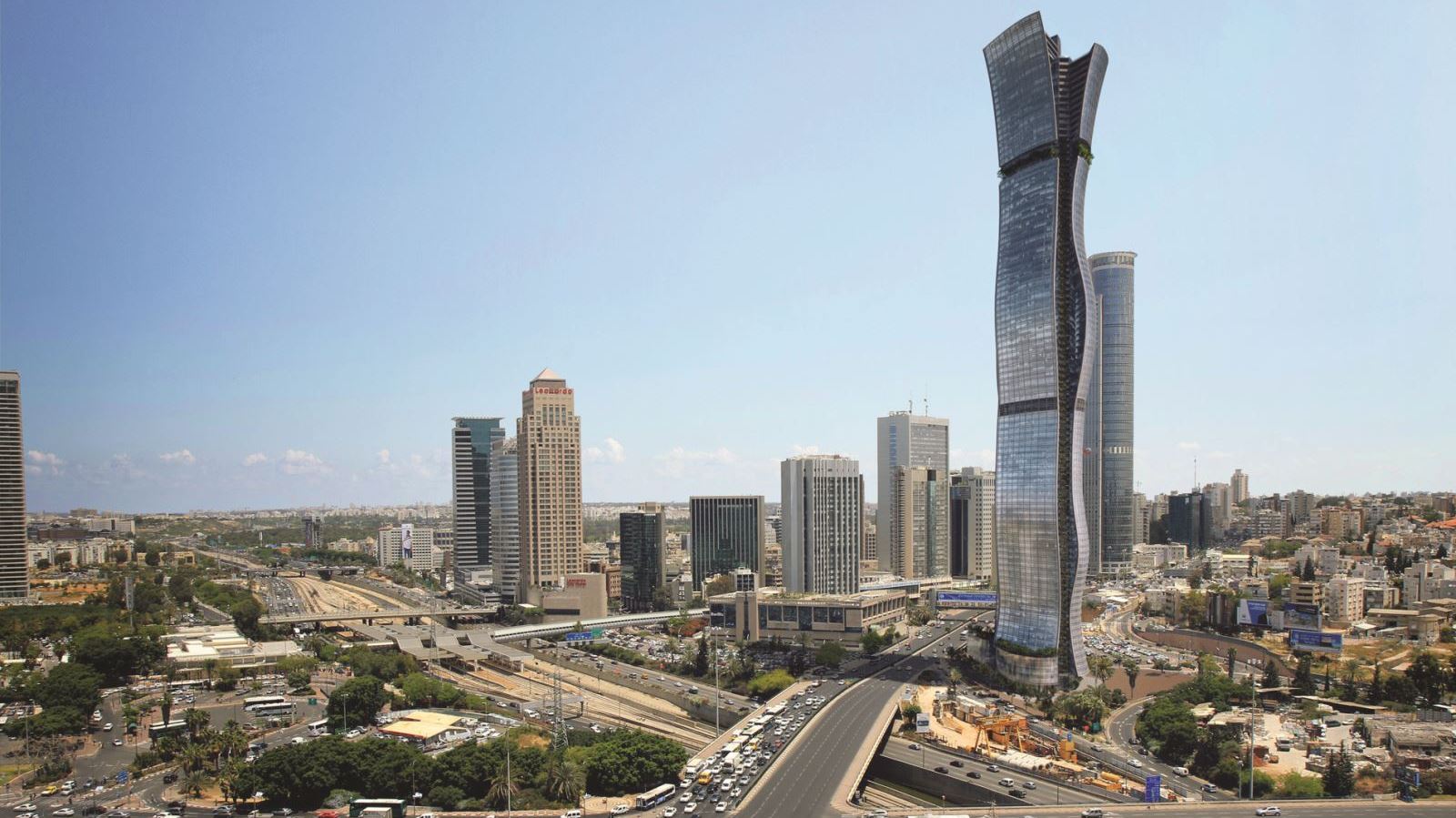 A 100-floor skyscraper straddling the border of Tel Aviv and Ramat Gan, between the Savidor railway and bus station and the Diamond Exchange, is planned by Miloslavsky Architects.

The mixed-use building’s lower two floors will have retail space, followed by five stories for public use, 71 floors of offices and 15 stories for a hotel. In total, Between the Cities will encompass 150,000 square meters (1.6 million square feet) of floor space.

Expected to be completed in 2023, the Intercity Tower will stand 400 meters (1,312 feet) high and encompass 24 high-speed elevators. It is expected to be Israel’s tallest building. 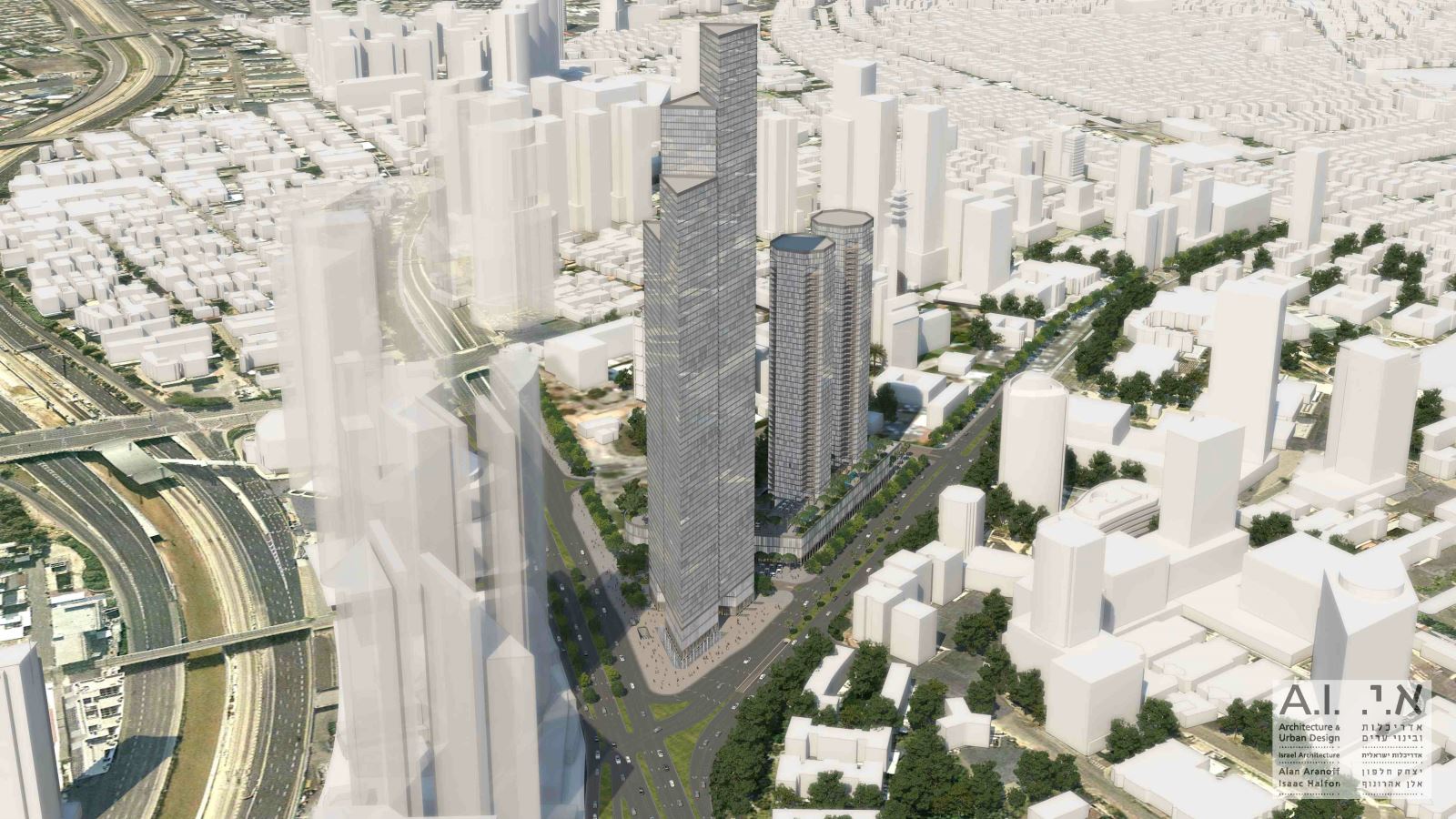 It may be another three years until ground is broken for this massive project – two office towers of 80-plus stories and 50 stories, respectively, and two 45-story residential towers above a two-story retail mall — on 9.5 acres at a major midtown intersection near the Kirya, the IDF/Defense Ministry headquarters in Tel Aviv.

A central focus of Keren Hakirya is to be a landscaped pedestrian plaza flanked by retail and dining space, similar to Rockefeller Center in New York City.

A pedestrian bridge will link the two commercial buildings and the complex will be served by the future light rail. Bus, bicycle and pedestrian access also is planned, as well as underground parking and service levels.

Architect Alan Aranoff of A.I. Architecture and Urban Design, whose firm did the master plan for the project initiated by the Israel Land Authority, Defense Ministry and Tel Aviv Municipality, tells ISRAEL21c the bigger tower will be the first built.

In the architectural design world, Keren Hakirya has been nicknamed “Toblerone Towers” because its shape is reminiscent of the tall candy bar, consisting of clusters of extruded triangles of different heights.