The ark-shaped museum, located in Tel Aviv, houses 5.5 million specimens from around the world, from early human skulls to rare taxidermy pieces.

Upon entering the new natural history museum in Tel Aviv, visitors are greeted by a vivid re-enactment of the great avian migrations from Africa to Europe through northern Israel’s Hula Valley, complete with stuffed hawks, pelicans and vultures circling around the ceiling of the building’s entrance.

The 100,000-square-foot Noah’s Ark-shaped building, which houses more than 5.5 million specimens of species from around the globe, opened this week alongside the Tel Aviv University campus after more than two decades of planning.

As the biggest natural history museum in the Middle East and Israel’s national center for biodiversity studies, the Steinhardt Museum of Natural History highlights the country’s ecological diversity at the crossroads of the three continents, as well as the impact of urban development, climate change, and man-made devastation on the region’s ecosystems.

The main goal of the museum, according the curators, is to increase public awareness about the natural world and environment on a local and global scale. The Steinhardt Museum of Natural History exhibit “Form and Function” showcases diversity of creatures from Israel and around the globe. Photo by Itay Benit

Israel attracts millions of visitors from around the world every year who are eager to discover the country’s cultural and religious artifacts. The museum, expected to host 150,000 visitors per year, will be now able to offer visitors to the Holy Land an in-depth look at the region’s unique natural history, both ancient and modern.

“The commitment and partnership of the Israeli Government and donors to the Museum, headed by Michael Steinhardt, led to the establishment of a unique, groundbreaking Museum that will become an important cultural attraction for thousands of families, school children, nature lovers, tourists and scientists from around the world,” said Tamar Dayan, a professor of mammalogy at Tel Aviv University and the chair of the museum. “For researchers and scientists – the Museum will be a continuing source of knowledge and discovery of the life around us in the present and in the past.”

“The Middle East is a lacuna in terms of knowledge in biodiversity and natural history collections,” Tamar Dayan, a professor of mammalogy at Tel Aviv University and the chair of the museum, told Smithsonian Magazine. “We think there’s an international community who want to know what happens here.”

Establishment of the $40 million museum was made possible by prominent American philanthropist Michael Steinhardt, cofounder and funder of Birthright and a frequent donor to Israeli initiatives, and his wife, Judy. The building was designed by Tel Aviv-based architecture firm Kimmel Eshkolot. Tamar Dayan and Michael Steinhardt at the inauguration of the Museum of Natural History in July 2017. Photo by Israel Hadari

The museum presents eight permanent exhibitions, displaying thousands of items from the national natural history collections that previously available only to scholars at Tel Aviv University and several other museums in Israel, as well as one temporary exhibition.

The museum includes items that have been collected since the end of the 19th century, such as the collection of German zoologist and Catholic priest Ernst Johann Schmitz, who lived in Israel a century ago. In the “Treasures of Biodiversity” exhibit, Schmitz’s taxidermy pieces include the last bear from 1916, an Asiatic cheetah from 1911, and the last crocodile from the Taninim River, all species that have become extinct in Israel. 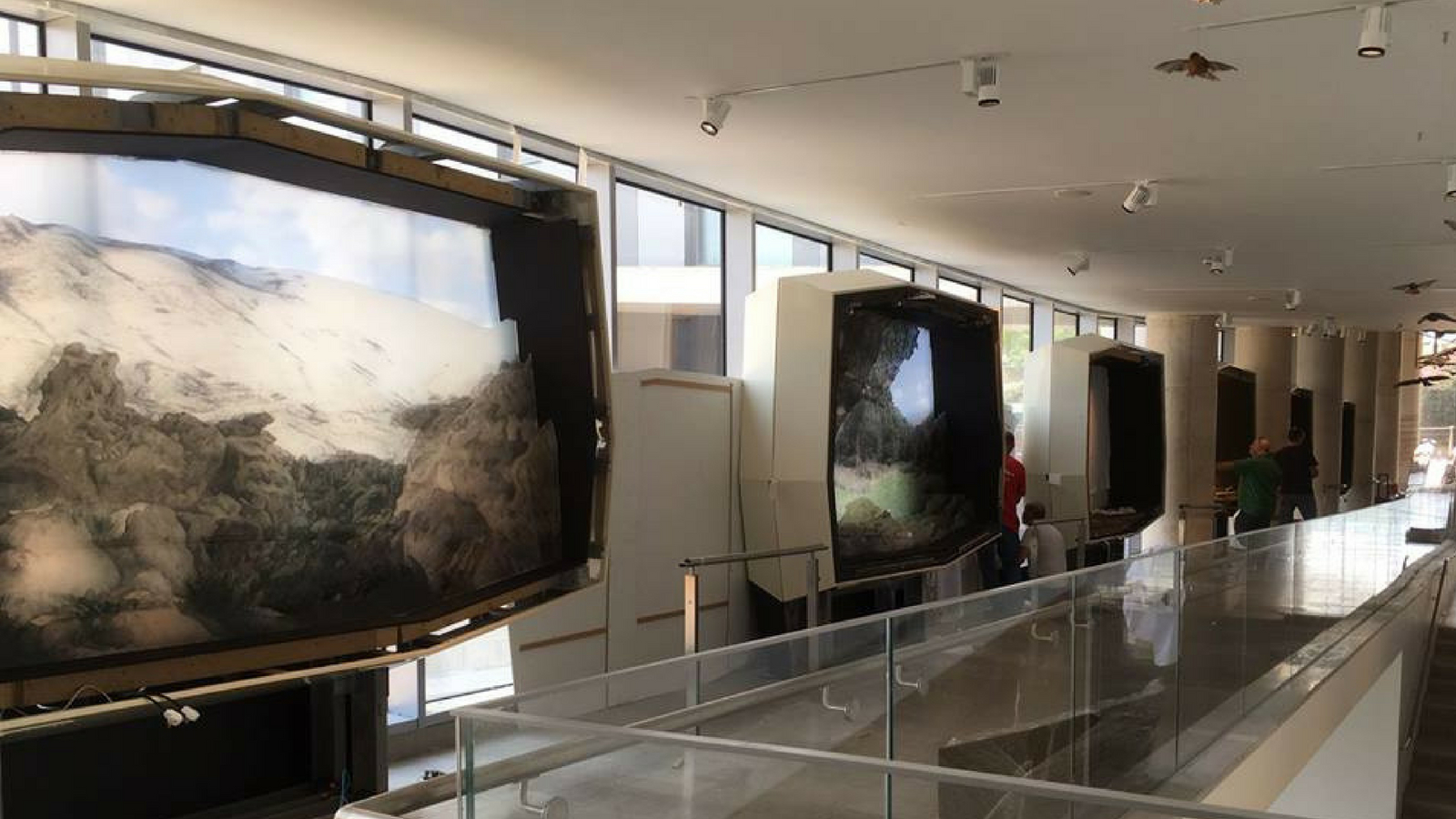 Construction for the exhibition “Israel’s Landscapes,” which surveys the impressive range of habitats in Israel. Photo via Facebook

In another exhibit, a 20-foot-long interactive map of Israel showcases current environmental problems including the depletion of Israel’s only freshwater source, the Sea of Galilee, and the shrinking of the Dead Sea by three feet every year.

The importance of adopting environmentally friendly lifestyles and behavior is conveyed in the museum’s “Human Impact” exhibition, urging young visitors to stop littering and minimize light pollution along the coasts that endangers sea turtle populations.

Other exhibits include “Bugs and Beyond”, which includes live creatures and teaches visitors about the world of arthropods – the largest and most diverse phylum in nature; “Life in the Dark”, which offers a glance at animals from Israel and around the world that live without daylight; “Israel’s Landscapes”, which surveys the impressive range of habitats in Israel; “Urban Nature”, which reveals the city life of wild animals; “What Makes Us Human?”, which surveys the biological and cultural evolution of the human species.

The temporary exhibition on display at the Museum’s opening is Life Object, which represented Israel at the 2016 Architecture Bienniale and deals with the influence of nature on architecture.

One of the challenges in designing the building, according to Kimmel Eshkolot, was designing a solution to store the museum’s research collections that would meet the proper controlled climatic conditions. 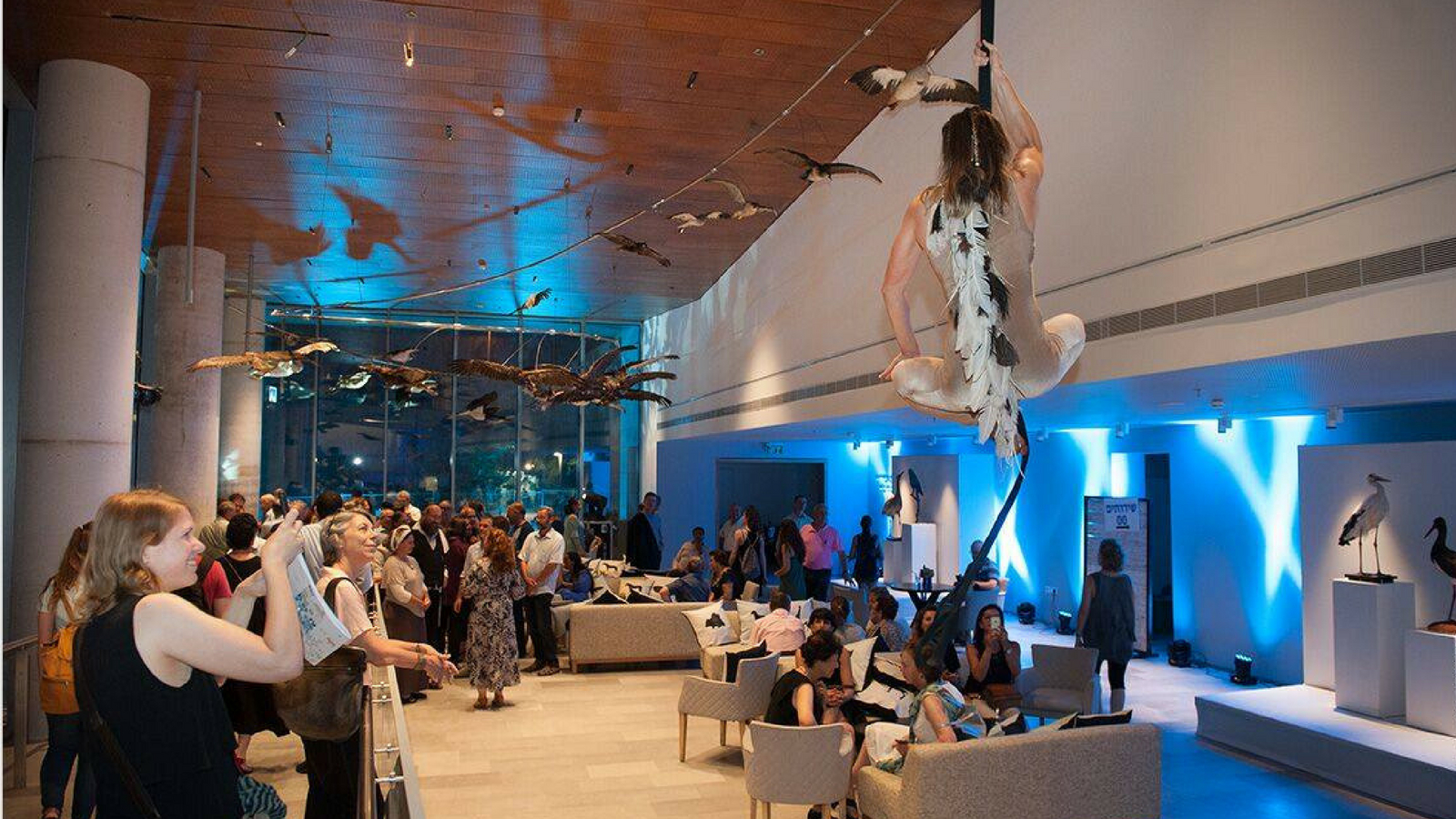 The entrance of the Steinhardt Museum of Natural History during its inauguration event in July 2017. Photo by Moshik Brin

The result is the ark-shaped wooden structure, visible from the museum’s exterior, originally designed to look like a treasure chest. Only after construction did the building take on new meanings, the main one being Noah’s Ark, preserving nature’s treasures for future generations.

Visitors to the museum pass through the ark where they are able to view the rooms that house the collections.

At the museum’s labs and research facilities, international scientists from a range of disciplines will study samples of the natural world to further their understanding of ecosystems’ modes of action and their conservation.

“We should play a key role in society,” Dayan said of the museum and the potential research from its collections. “It’s a huge privilege, scientists feeling they have a role. More than ever today, with the challenges our planet faces, we have a need for public discussion.”

In addition to its exhibits, the museum also includes study galleries for workshops and other activities, an auditorium, and in the near future, a shop and a restaurant.

On the weekends and holidays, research and craft workshops, film screenings in the auditorium and other activities will be available for visitors.