From north to south, Israel offers sites where you can see and learn about a wide assortment of the creatures with which we share this land.

Since humans are not the only species roaming this earth, it only makes sense to pay a visit to wild and indigenous animals when visiting a country. If you ask us, there is no better way to perk up your day than to cuddle with a lamb, chat with a colorful bird, or watch monkeys swinging through a forest canopy.

This is a list of places where you can visit rescued, rehabilitated, indigenous and downright wild animals doing their own thing while you’re in Israel — and there are baby ducks and kangaroos too!

A meaningful spot for vegans and all animal lovers looking to connect with animals rescued from the food industry — such as sheep, cows and chickens — Freedom Farm aims to be the first educational center in the Middle East that helps people rediscover how to live in harmony with all animals.

The farm, 40 minutes north of Tel Aviv, plans to construct a visitors’ center with an educational museum and space for workshops and lectures. However, the biggest draw for us is the opportunity to sit with, cuddle, pet and interact with the animals in a way that has a positive effect on them and us. 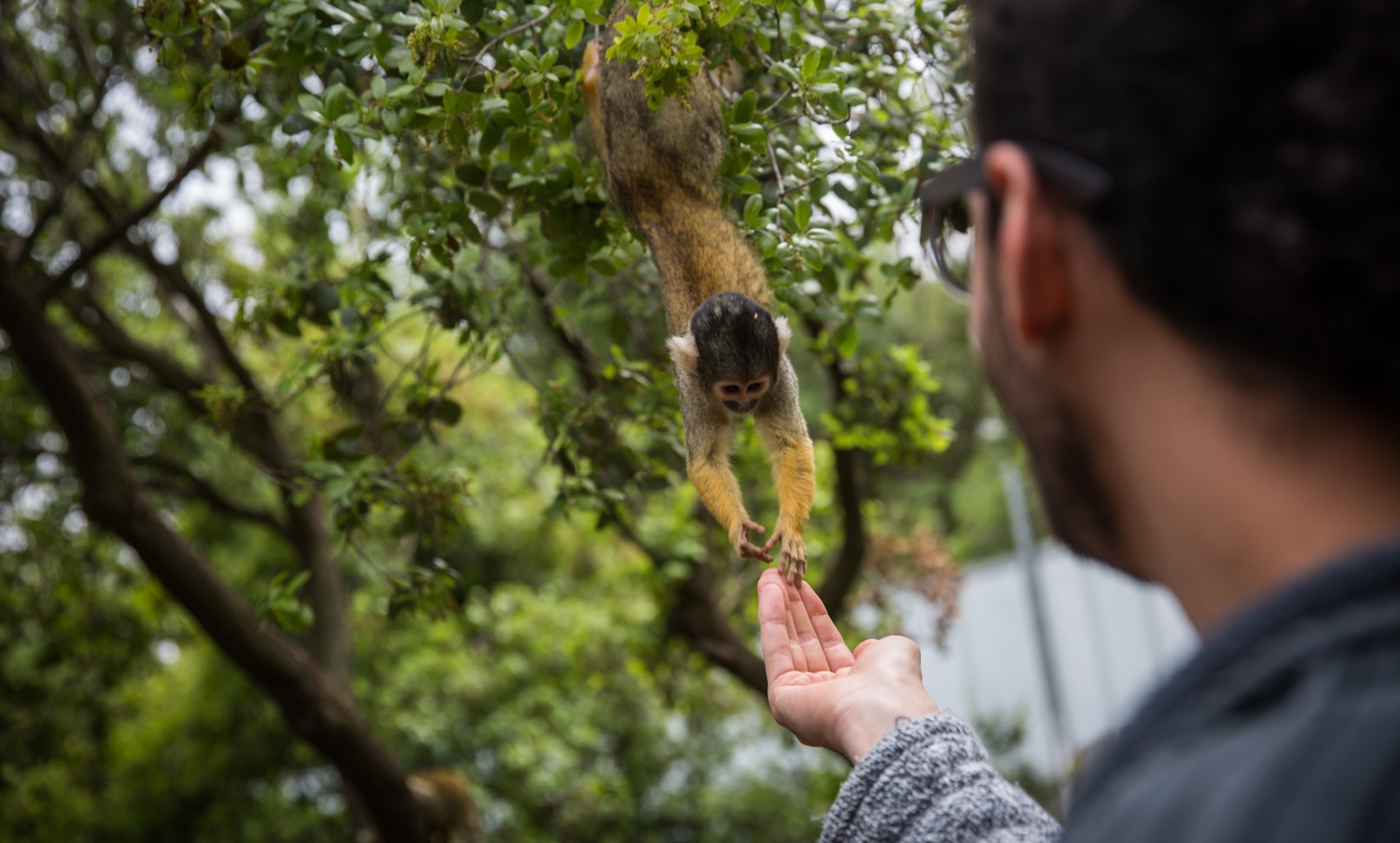 Visitors feeding the monkeys at Monkey Forest in Yodfat. Photo by Hadas Parush/FLASH90

Nora Noach’s monkey sanctuary, which has been functioning as an educational and animal protection center since the 1970s, is designed as an open forest where guests can walk freely among the animals and monkeys.

Here the animals are treated with love and respect, and so the several types of monkeys, lambs, goats, rabbits and parrots in the park are meant to be observed without being bothered. That means no petting zoo or pony rides here. Instead, the experience is serene and peaceful, swinging spider monkeys and all. 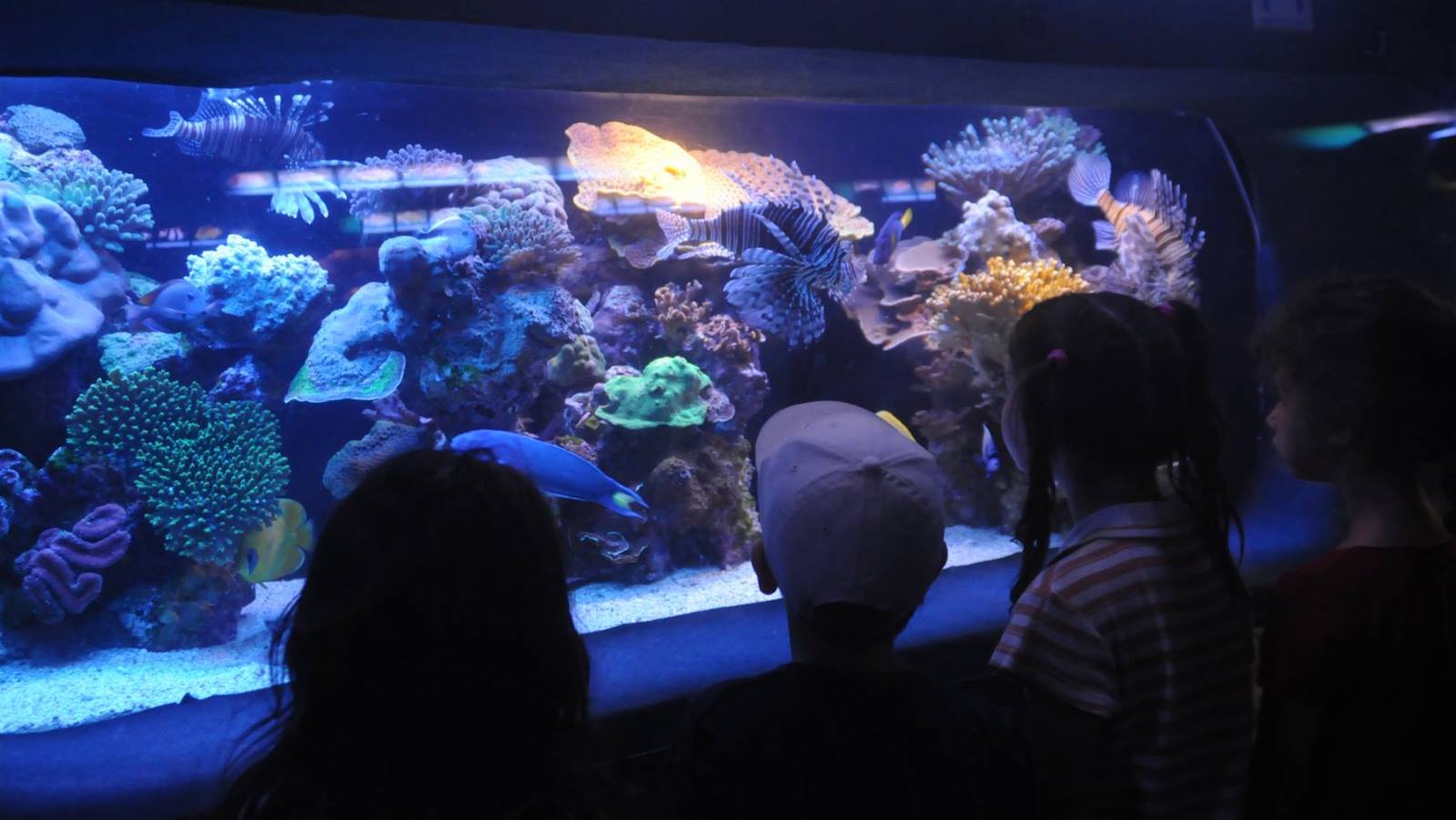 Children watching fish in the underwater observatory at Coral World in Eilat. Photo by Jorge Novominsky/FLASH90

If you think Israel is just desert and cities, think again. The Red Sea along the southern tip of Israel is home to one of the world’s most flourishing coral reefs, which is on full display at the Coral World Underwater Observatory Marine Park in Eilat.

There are some 800 marine species native to the area on display here, and a 12-meter-deep underwater observatory allows visitors to get an uninfringed view of the heart of the reef without fences or cages to inhibit the creatures. Visitors leave with a newfound appreciation for underwater life. 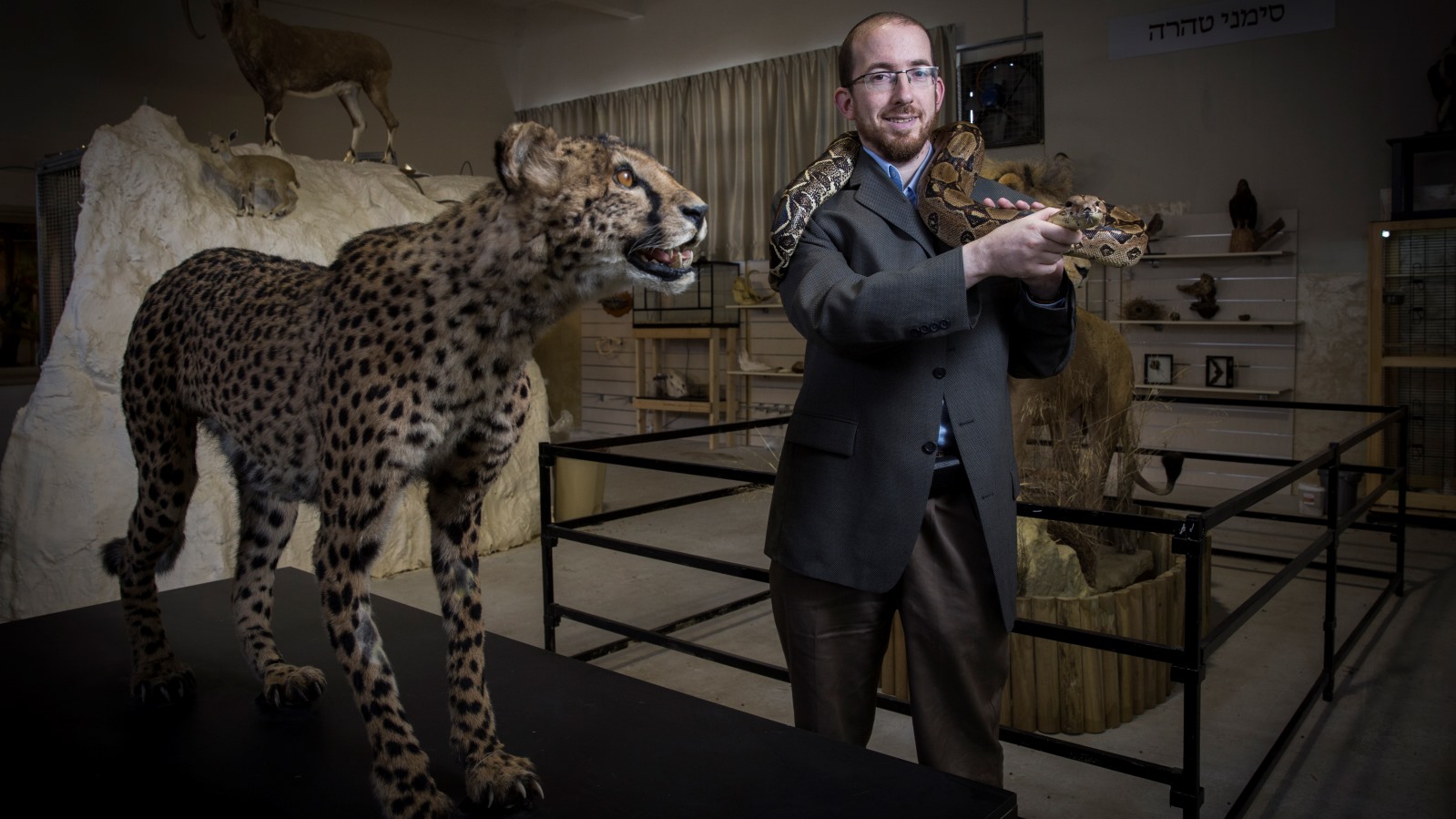 This museum is unlike any other in the world. Focusing on the indigenous animal culture of Israel, dating back to biblical days, it functions as both a zoo and an educational center to teach about animals and their connection with the wonders of creation and the Bible.

A fully guided multigenerational experience, in which visitors interact and engage with live animals and see rare taxidermized animals presented in meaningful ways, it is definitely a worthwhile itinerary point for all those interested in animals.

Tours are run by staff and director Rabbi Natan Slifkin, often referred to as the “Zoo Rabbi,” a world expert and published author on the subject as well as a proponent of rationalist Judaism, which encourages modern science and the biblical Genesis to exist in a symbiotic way, as they do in the museum.

Gan Garoo on Kibbutz Nir David is the only place outside of Australia that offers an up-close-and-personal experience with more than 50 free-roaming kangaroos, which means petting these perplexing creatures to your heart’s content.

And it’s not just for kangaroo and marsupial lovers. This Australian-themed interactive zoo also allows you to feed parrots and get up close to fruit bats, emus and different species of reptile.

Newer residents of Gan Garoo include red-neck wallabies and sugar gliders, as well as the first baby flying fox (fruit bat) born at the zoo in seven years. You can view baby and mommy in the bat exhibition. Or, if you’re looking for a little fantasy, try the giant tree maze that features moving and talking dinosaurs. 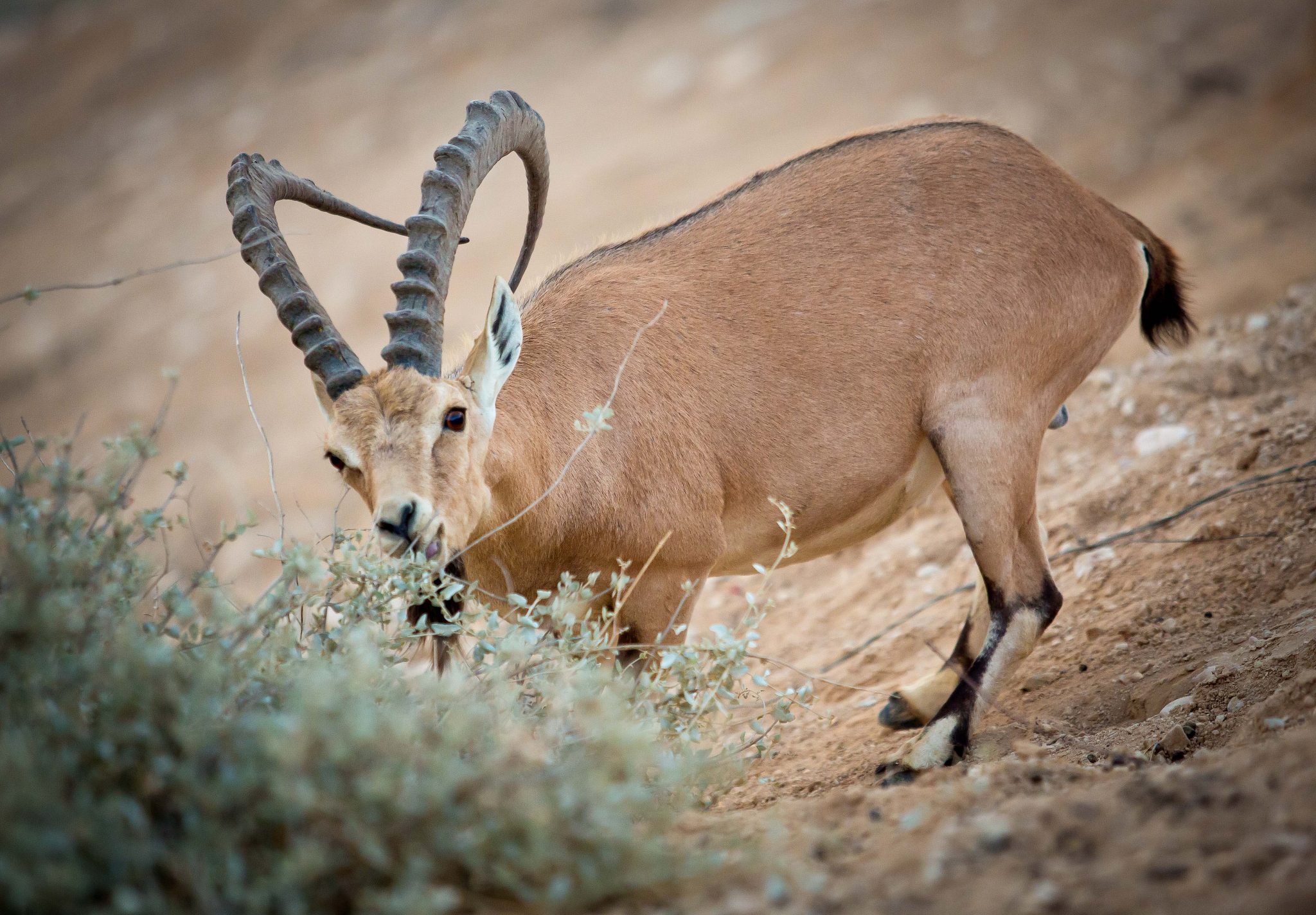 A mountain goat in the Israeli Negev Desert. Photo by Moshe Shai/FLASH90

A historical location with an unbelievable view, Midreshet Ben-Gurion is not only the final resting place of Israel’s first prime minister, David Ben-Gurion, and his wife Paula, it’s also a natural habitat for families of ibex residing in the surrounding desert canyon.

Go to the open-air memorial at sunset. As darkness falls, you will see wild ibex wandering through the site. Walk along the officially marked path that lines the rocky hillside, and you’ll see ibex jumping, eating and resting in groups. Just don’t get too close; remember that these are wild animals, majestic though they may be. 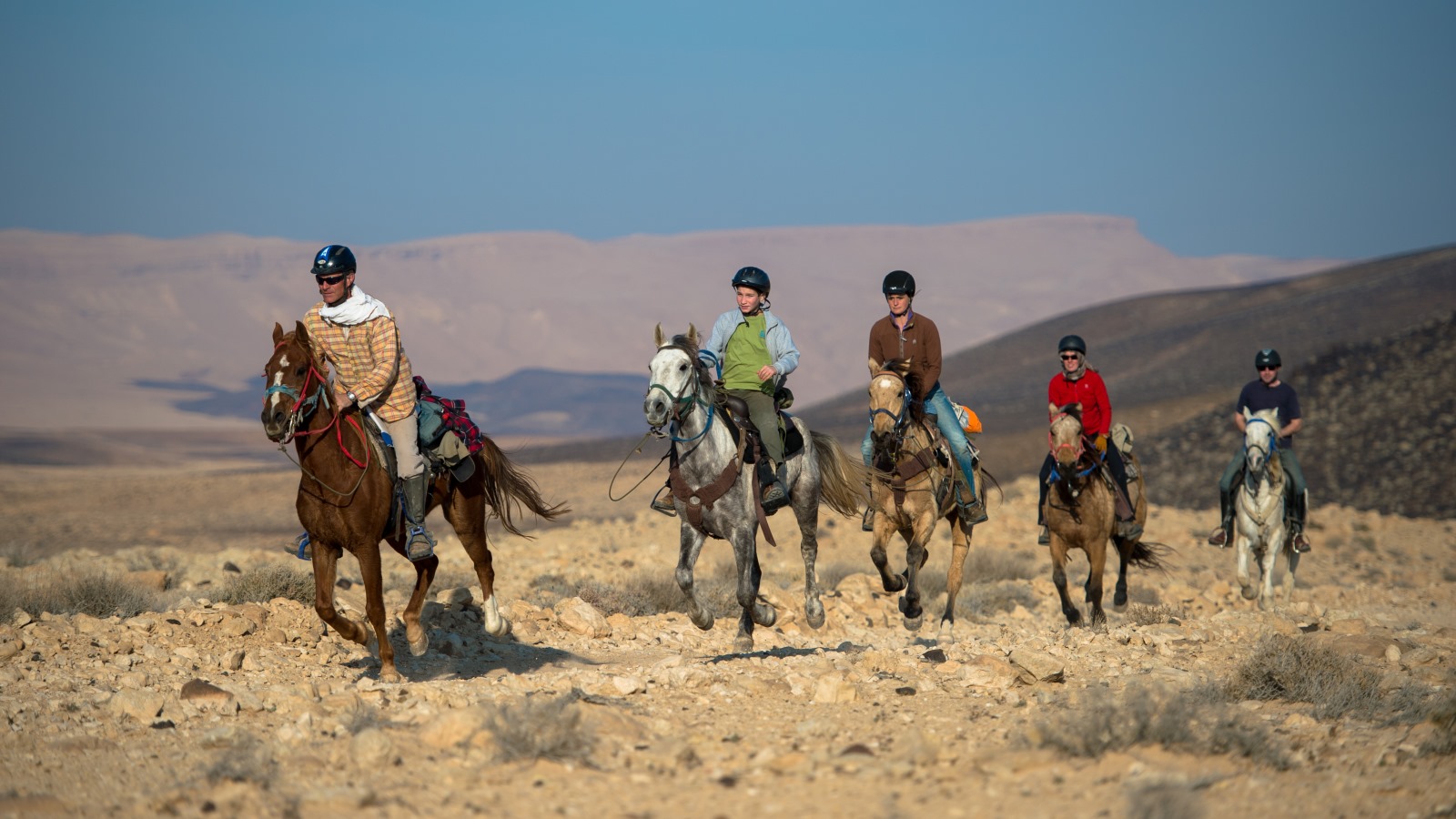 At the Alpaca Farm in Mitzpeh Ramon, located in the Negev Highlands on the world’s largest naturally occurring crater, you can make the acquaintance of llamas, horses, donkeys, angora sheep, camels, and of course, South American alpacas.

Interact with the animals, feed and pet them, learn about their daily habits (sand baths and spitting included), watch them being sheared, learn about yarn production, participate in yarn crafts, and even let the alpacas accompany you on a desert walk and picnic in the scenic valley. 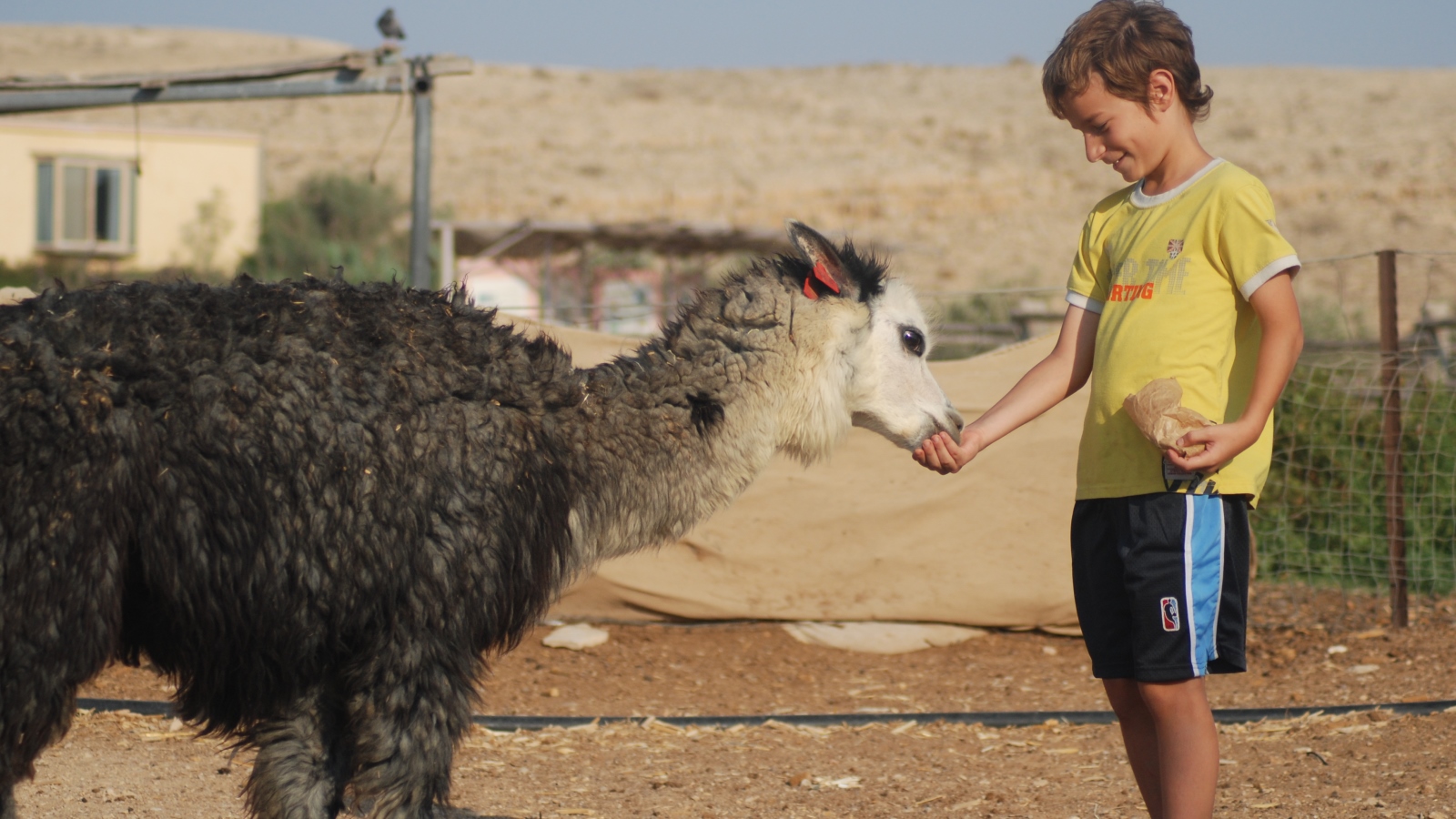 At the Alpaca Farm in Mitzpeh Ramon, alpacas are kept company by horses, llamas and donkeys. Photo: courtesy 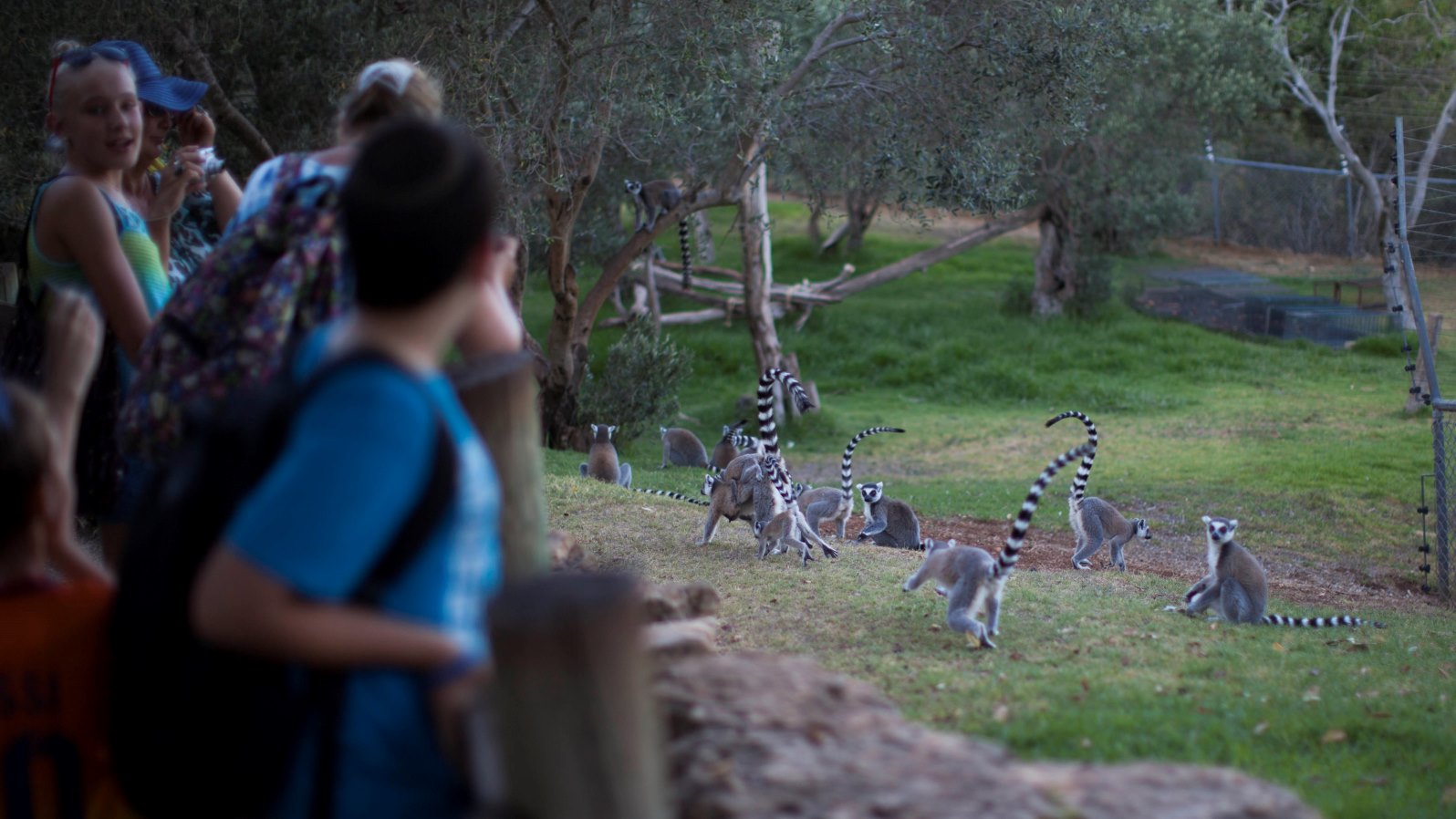 This is a place where Jews and Arabs, religious and not, come together to view endangered animals and animals that flourished in Israel during the time of the Bible, such as lions, tigers, bears and even elephants.

But the Biblical Zoo is more than just live animal exhibits. There are educational programs, wildlife conservation programs and sustainability projects, such as reintroducing the fallow deer species into the area, and incubating birds of prey. Plus, its lush green space is a welcome retreat from the hectic urban landscape of Jerusalem. 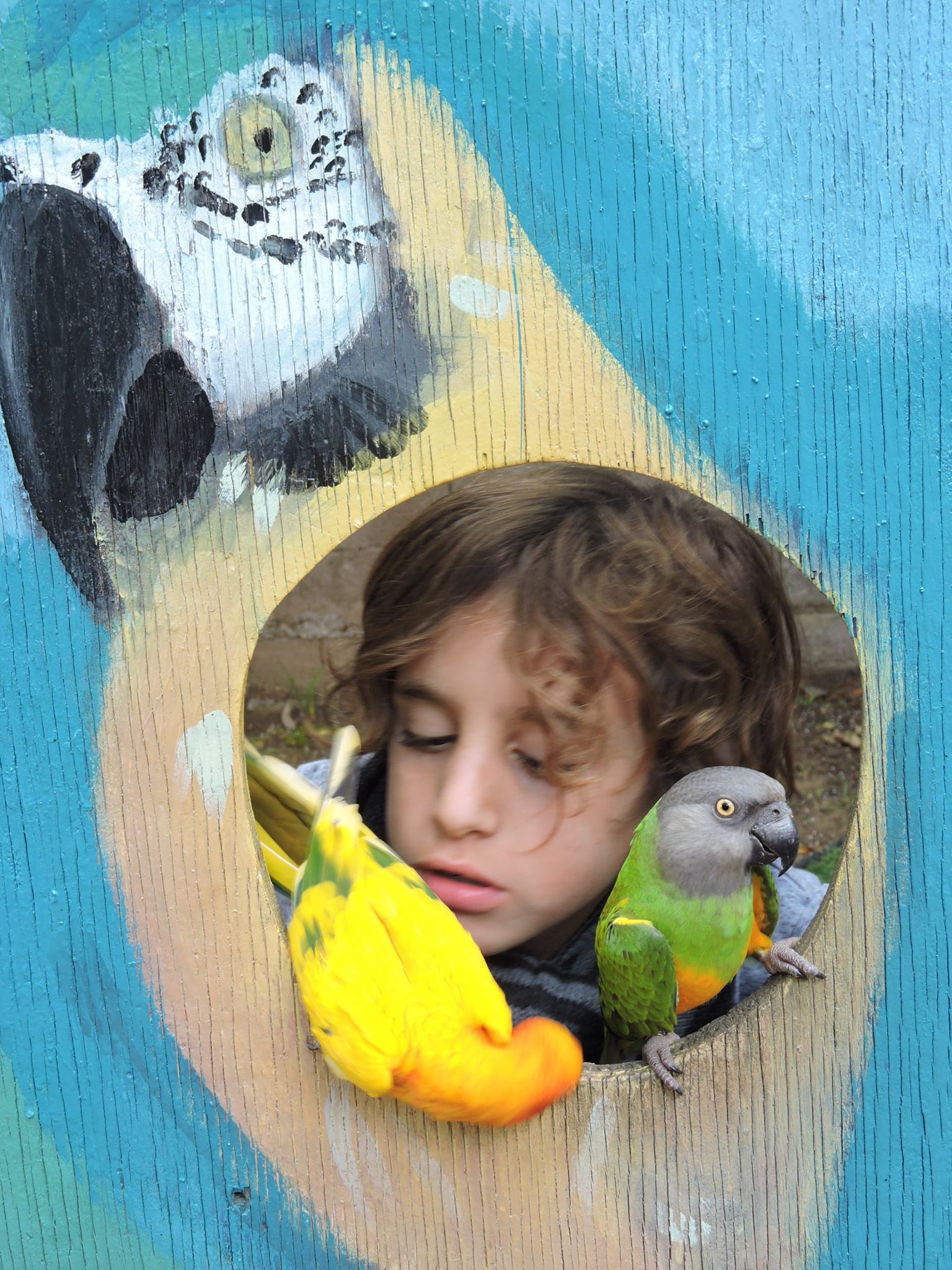 Fun at the Parrot Farm in central Israel. Photo: courtesy

FeeliJessica Halfin is an American immigrant who arrived in Israel in 2006.  She is an Israeli-trained baker, gourmet cook, food and culture writer, and gives foodie tours to tourists in Haifa City.ng in the mood for a heart-to-heart talk — with a parrot? This colorful parrot farm in Kfar Hess might

just be what you’re looking for.

The farm houses dozens of types of exotic birds, as well as rabbits, pheasants, chickens, peacocks, porcupines, sheep and other animals, all of which you can connect with on a personal level.

You can take a guided tour to learn about how to hold and feed the animals, visit the hatchery, do pita-baking workshop or make artwork from animal-inspired natural materials. 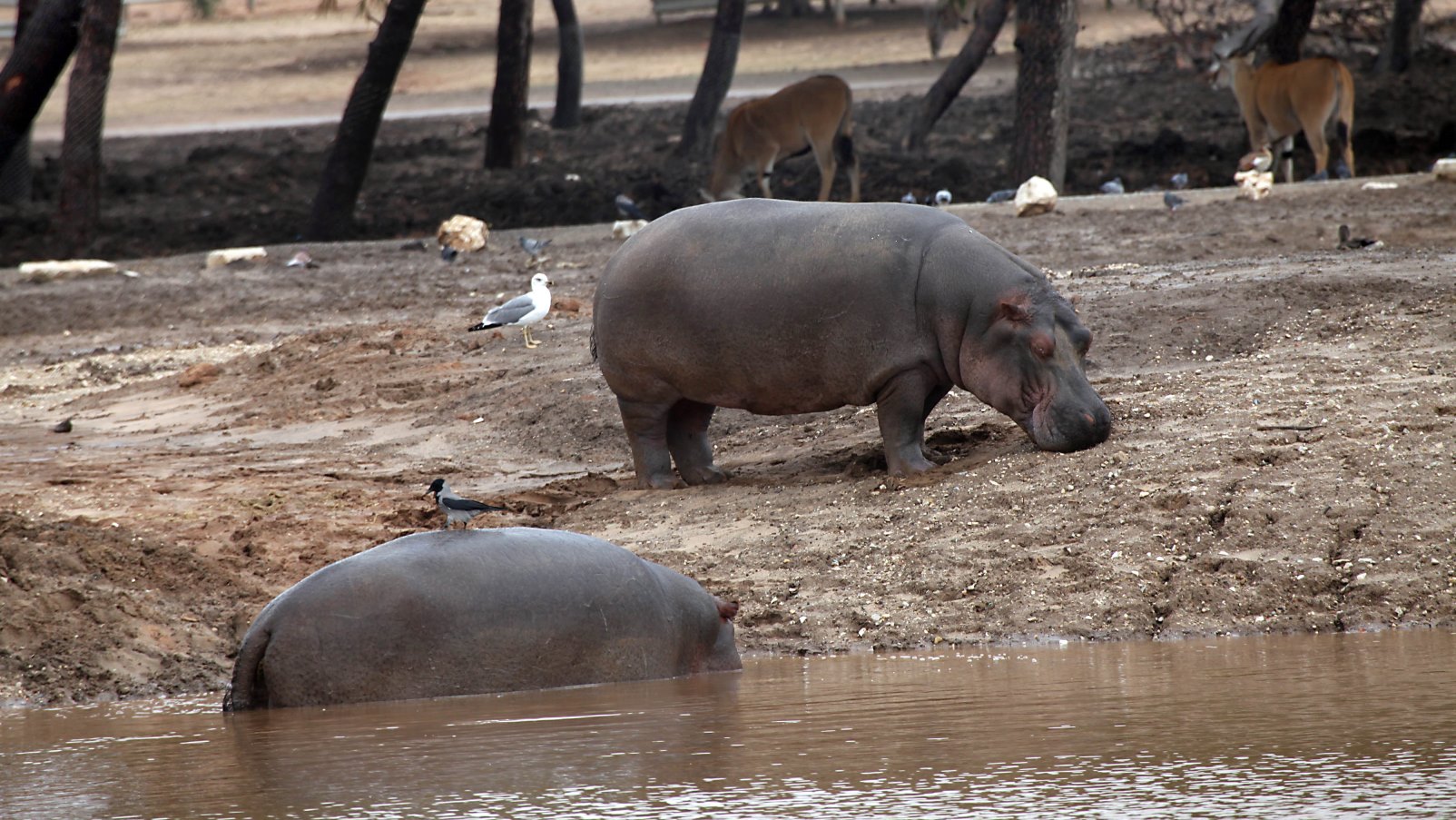 The Ramat Gan Safari brings the African savannah experience to central Israel. There, you can ride alongside herds of roaming animals as they freely wander the vast 250-acre park that mimics their natural habitats. The largest collection of safari animals in the Middle East boasts 1,200 species of mammals, birds and reptiles.

Jessica Halfin is an American immigrant who arrived in Israel in 2006.  She is an Israeli-trained baker, gourmet cook, food and culture writer, and gives foodie tours to tourists in Haifa City. (Israel21c)