We’ve chosen the best hotels in the city in 10 different categories, with input from tourists and experts in the travel industry – Hannah Blustin of Pomegranate Travel,  Avihai Tsabari of Via Sabra, Aaron Gertz of Aaron Gertz Tours and Ross Belfer of Eager Tourist.

Choosing best hotels is a matter of opinion, of course. We welcome you to share your own favorites with our readers by posting a comment at the bottom of the story.

And watch for an upcoming ISRAEL21c feature on the best new hotels opened in Tel Aviv during 2018. 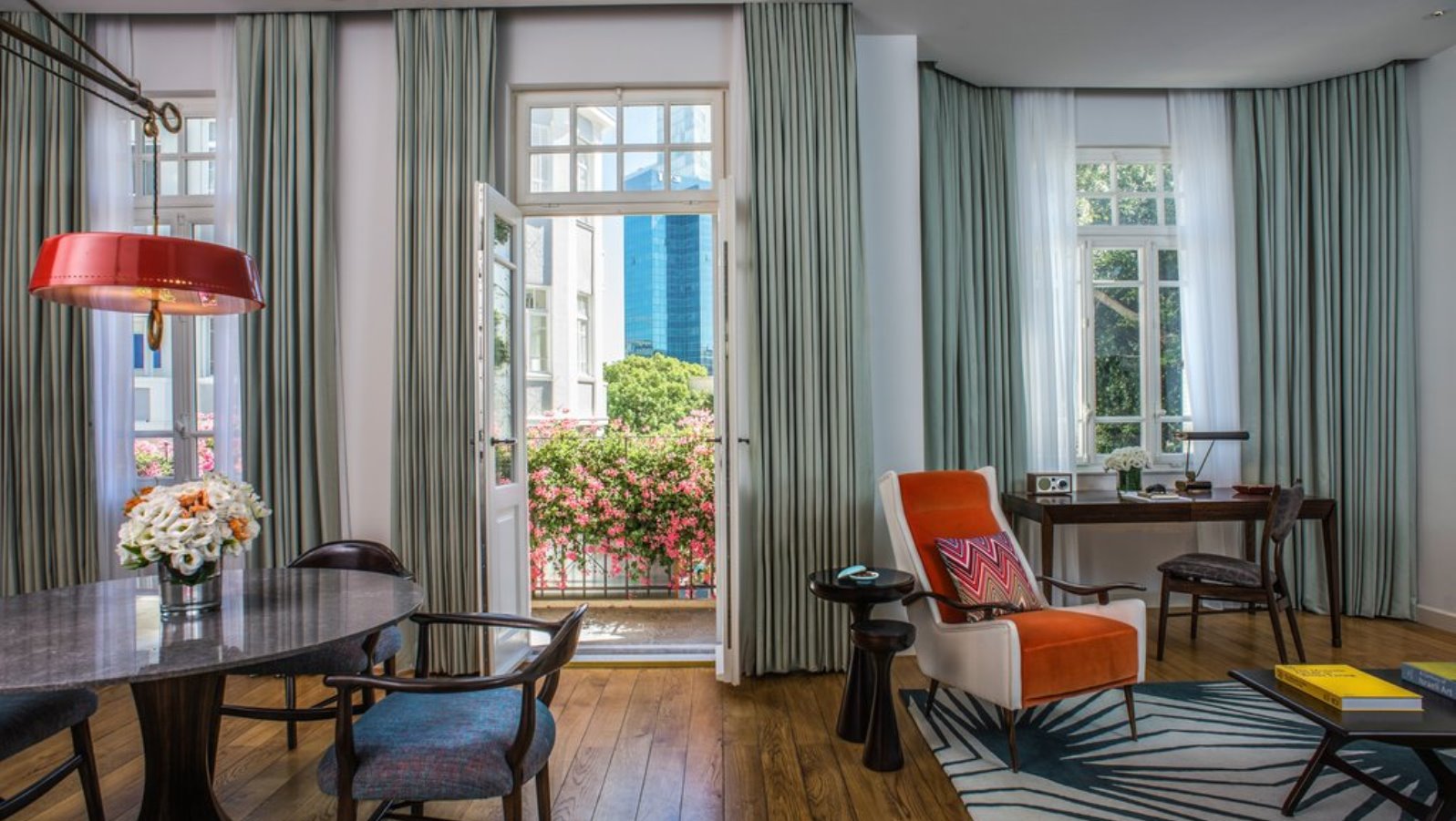 The King Albert Suite at The Norman, Tel Aviv. Photo by Sivan Askayo

This 50-room boutique hotel sets the standard in all that is refined and aesthetic, without being ostentatious. Its prime location in two restored 1920s Bauhaus buildings at King Albert Square near Rothschild Boulevard, 10 minutes from the beach, allows visitors to experience the breadth of the White City.

Only a year after opening in December 2014, The Norman was named Best Boutique Hotel in the World by Jetsetter magazine, and was named one of the top 50 hotels in the world (and best in Middle East) in the Conde Nast Traveler 2018 Readers’ Choice Awards. 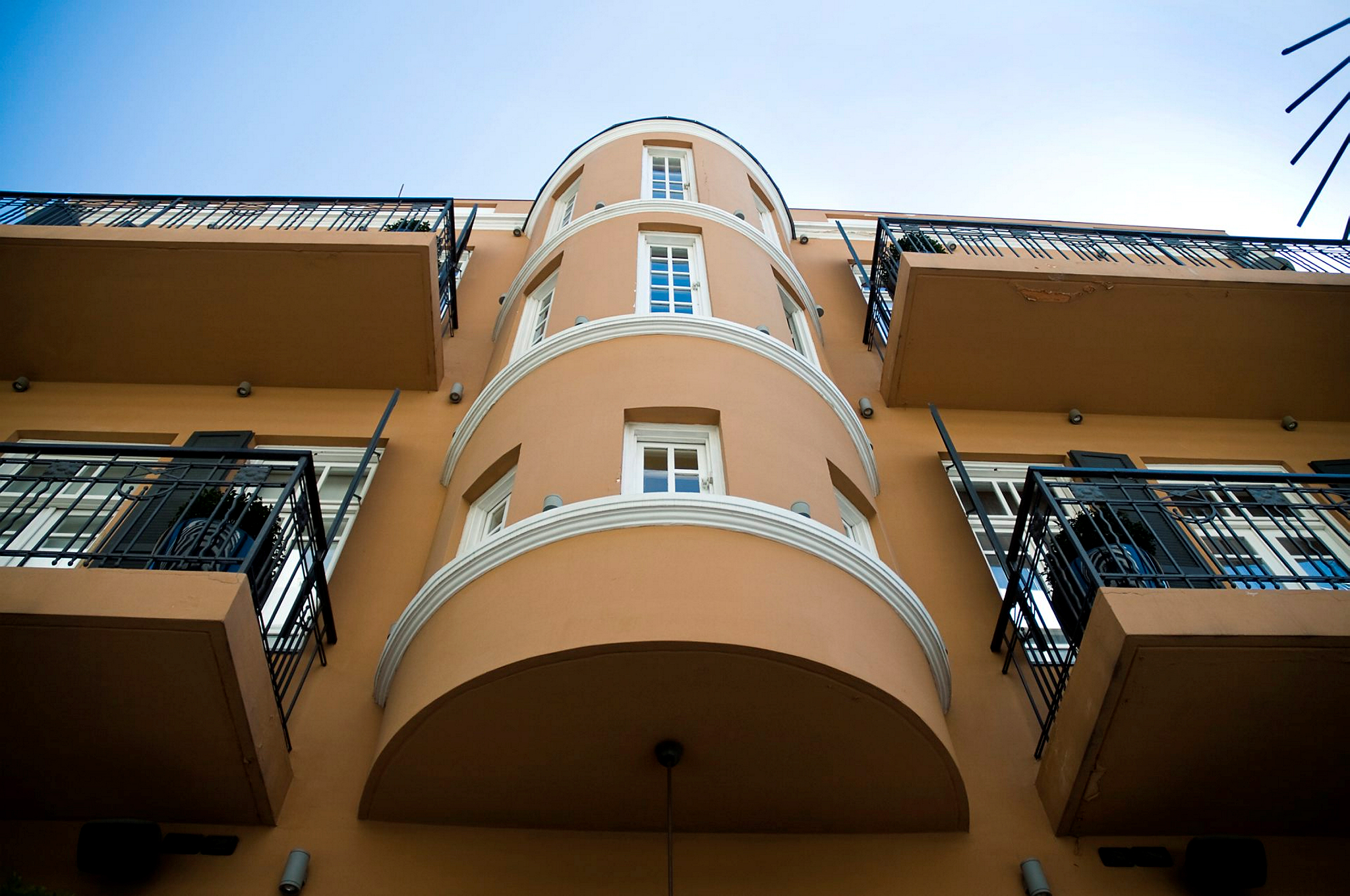 The Hotel Montefiore in Rothschild Boulevard. Photo by Flash90 The restaurant at the Hotel Montefiore. Photo by Flash90

Hotel Montefiore embodies the essence of quiet charm in a picturesque, meticulously restored eclectic architecture-style private home from the 1920 that was transformed in 2008 into a 12-room boutique hotel just off Rothschild Boulevard. All rooms boast black marble bathrooms, floor-to-ceiling libraries stacked with classic books in multiple languages, and contemporary artworks by Israeli artists. The small, welcoming White Villa boutique hotel was a labor of restorative love by architect and designer Stefano Dorata, bringing back the glory of one of Tel Aviv’s most famous Bauhaus (also called International) buildings, constructed as a family mansion in 1948.

Opened in May 2016, White Villa retains the feel of a grand private house, with 18 rooms, fireplaces and a front porch. It is near Dizengoff Center mall, stylish Shenkin Street and Habima Square’s theater and art institutions. 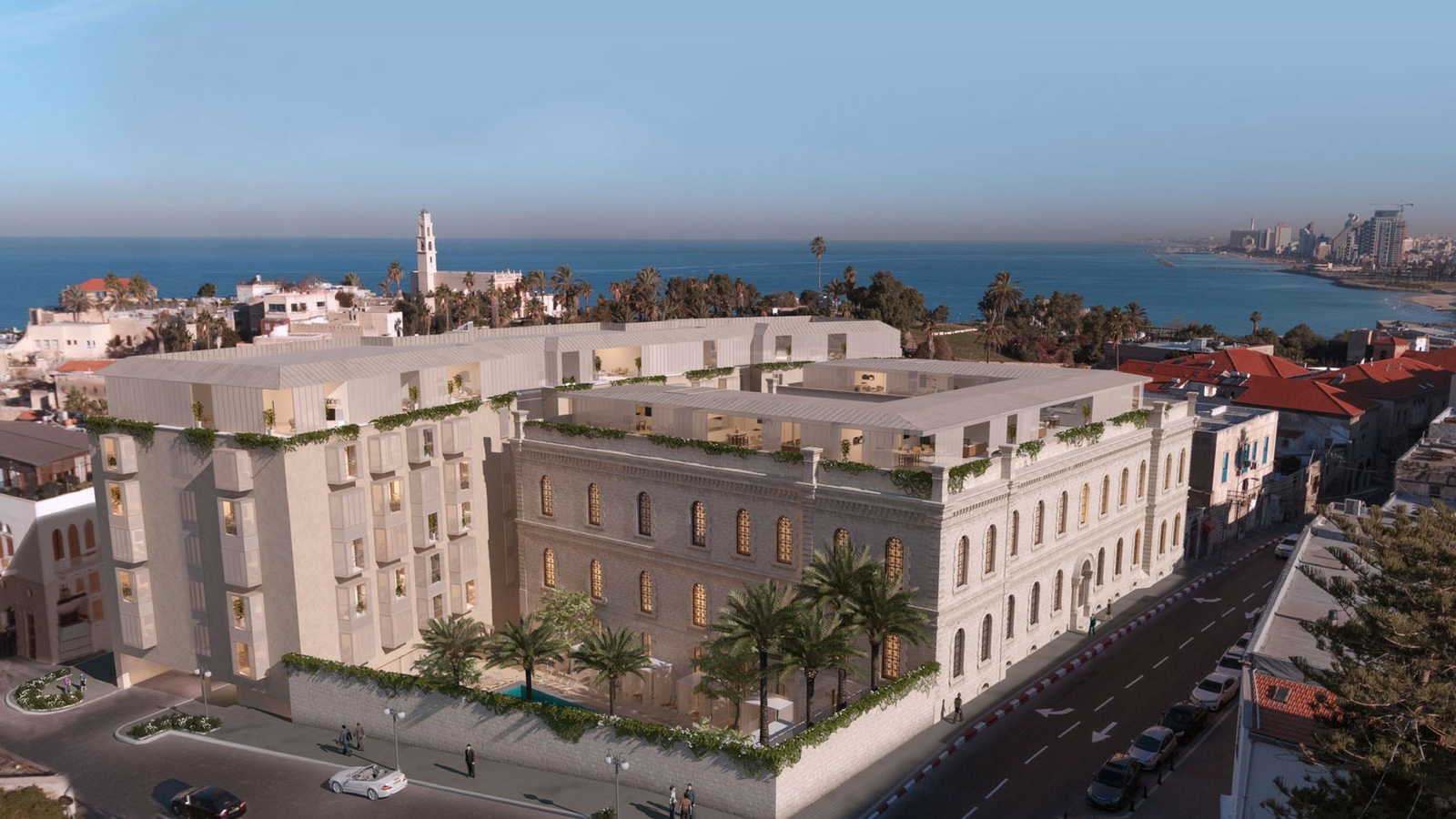 Opened in July by Marriott International, The Jaffa offers 120 rooms and suites within the walls of a 19th century complex renovated by architects John Pawson and Ramy Gill. In the lobby you can see the remains of a 12-century Crusader-era wall. Touches include the Mediterranean terrace courtyard, scented by lemon and lavender, and a designed pool area. 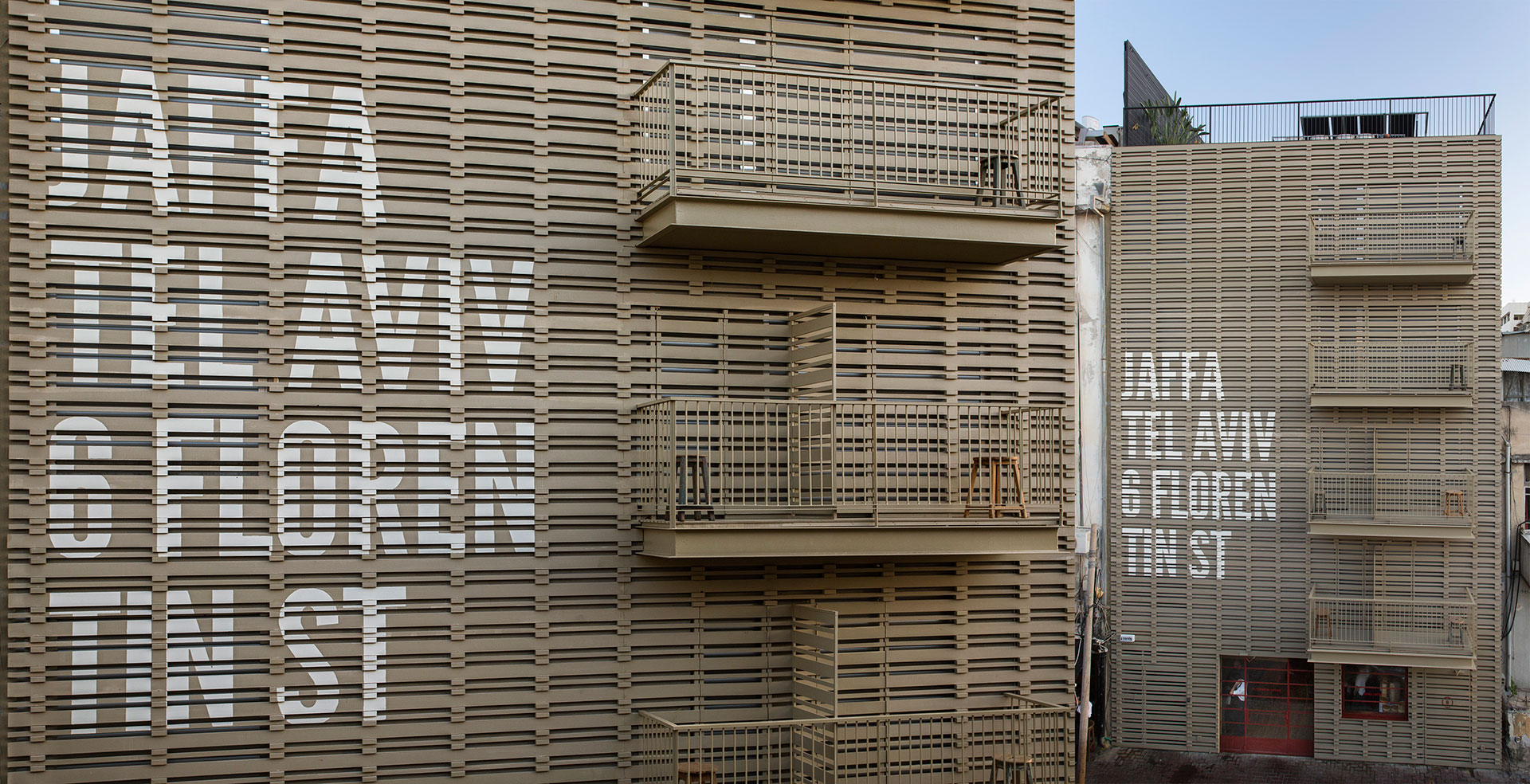 Everything from a rooftop suite to smart dorm rooms (all-female or mixed) are on offer at relatively low rates here in Tel Aviv’s hippest southern neighborhood. Whether you’re into vegan food, the bar scene, modern dance or street art, this is the place to be. The eco-friendly 24-room hotel, opened in spring 2016, offers bike rentals and it’s not far from the beach. 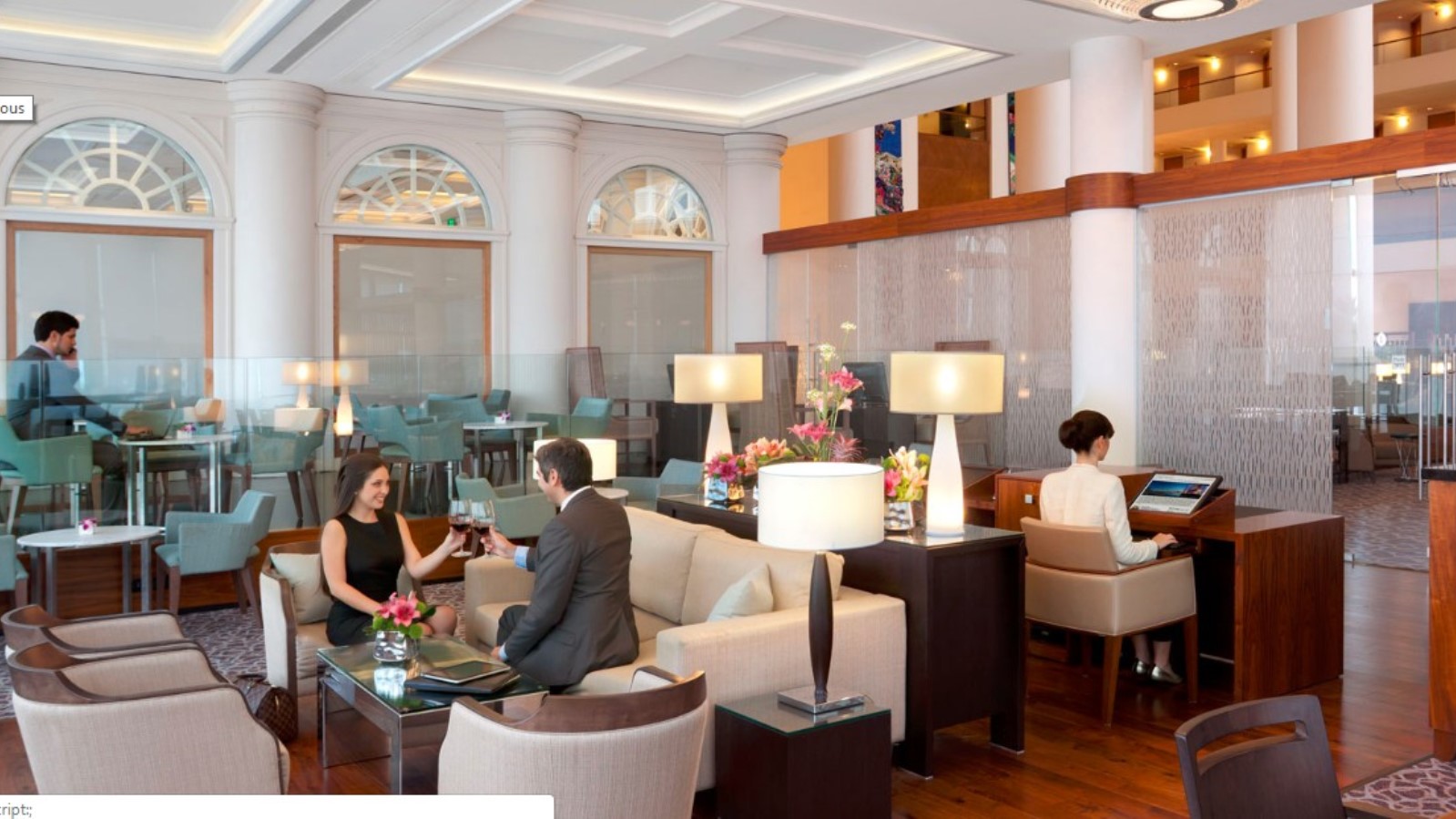 Situated at the southern end of Tel Aviv’s beachfront promenade near vibrant Neve Tzedek, the David InterContinental was named the best hotel in Israel, for the seventh time, at the 2018 World Travel Awards in Athens.

With 555 rooms and suites rooms overlooking the sea; three kosher restaurants; 24-hour business center, room service and fitness center; plus 29,000 square feet of banquet/meeting space — including 11 private boardrooms and a Grand Ballroom said to be the largest free-standing function space in Tel Aviv – it’s a favored venue for trade shows and conferences. 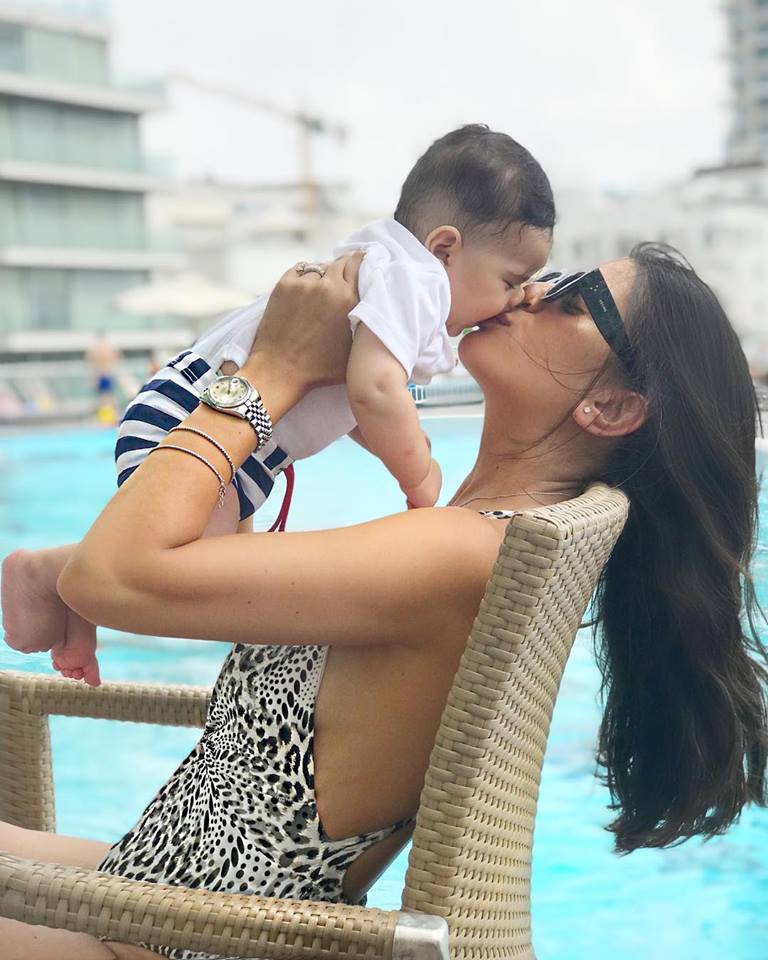 Children are welcome at the Dan Tel Aviv. Photo by Idan Tzur via Facebook

The first luxury hotel built in Tel Aviv, the beachside Dan has hosted celebrities such as Paul McCartney, Michael Jackson, Madonna, The Rolling Stones, U2, Lady Gaga and Conan O’Brien.

It’s also very accommodating of kids. Every child receives a free gift upon check-in, and can take part in the Danyland children’s club on weekends and holidays (subject to the number of children in the hotel). The outdoor pool has a small section for little ones, and the dining facilities offer children’s portions. 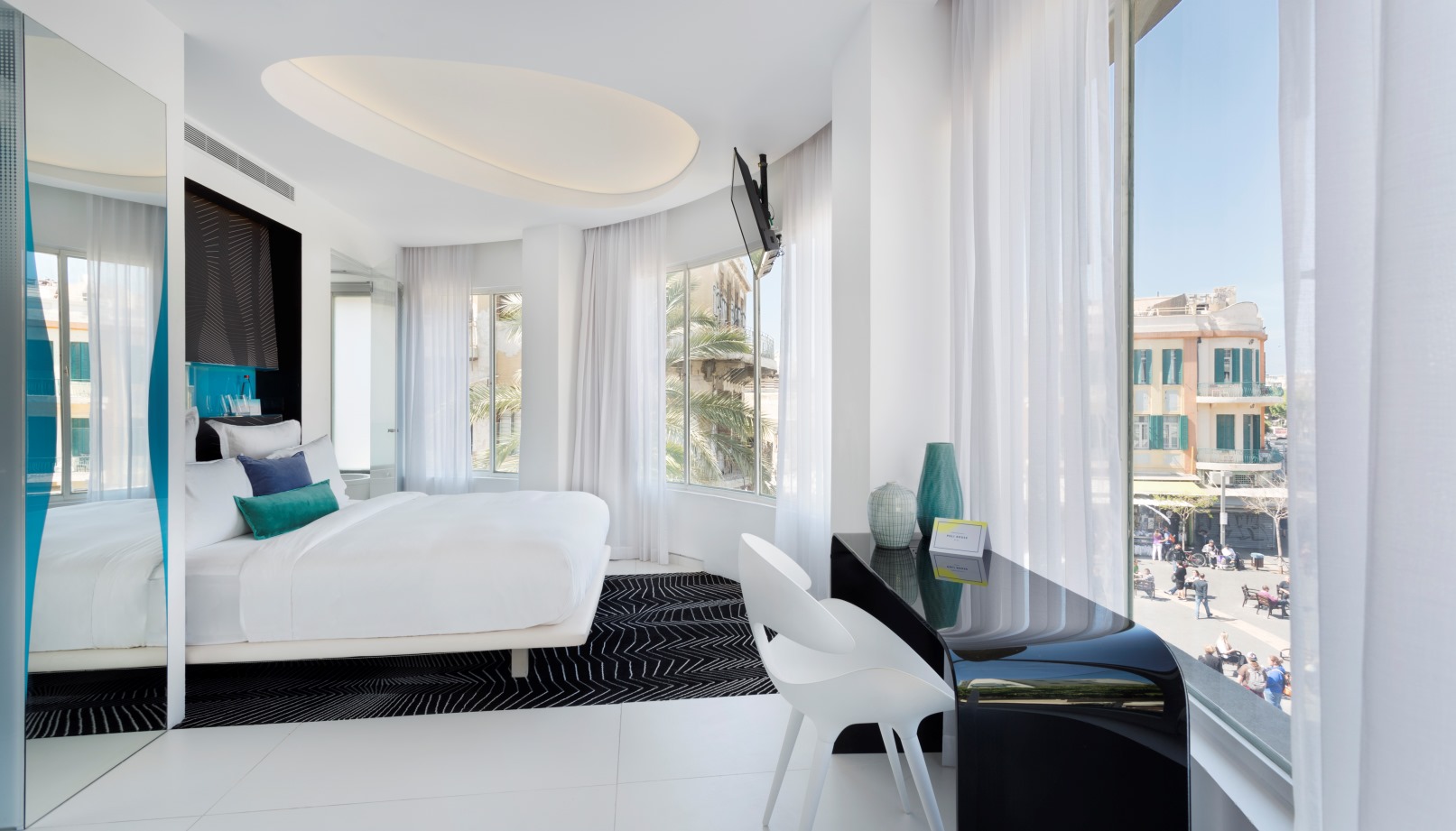 This 40-room boutique hotel originally was built in 1934 as a commercial office space known as Polishuk House. It housed the clandestine Etzel printing press during the British Mandate, and later the famous Naaley Pil (Elephant Shoes) children’s shoe store.

After lying dormant and graffiti-covered for years, the building was painstakingly restored by the award-winning Nitza Szmuk Architects and whimsically designed by Karim Rashid. Opened in 2016, Poli House is next to Carmel Market in an artsy part of South Tel Aviv known for its craft fair every Tuesday and Friday. 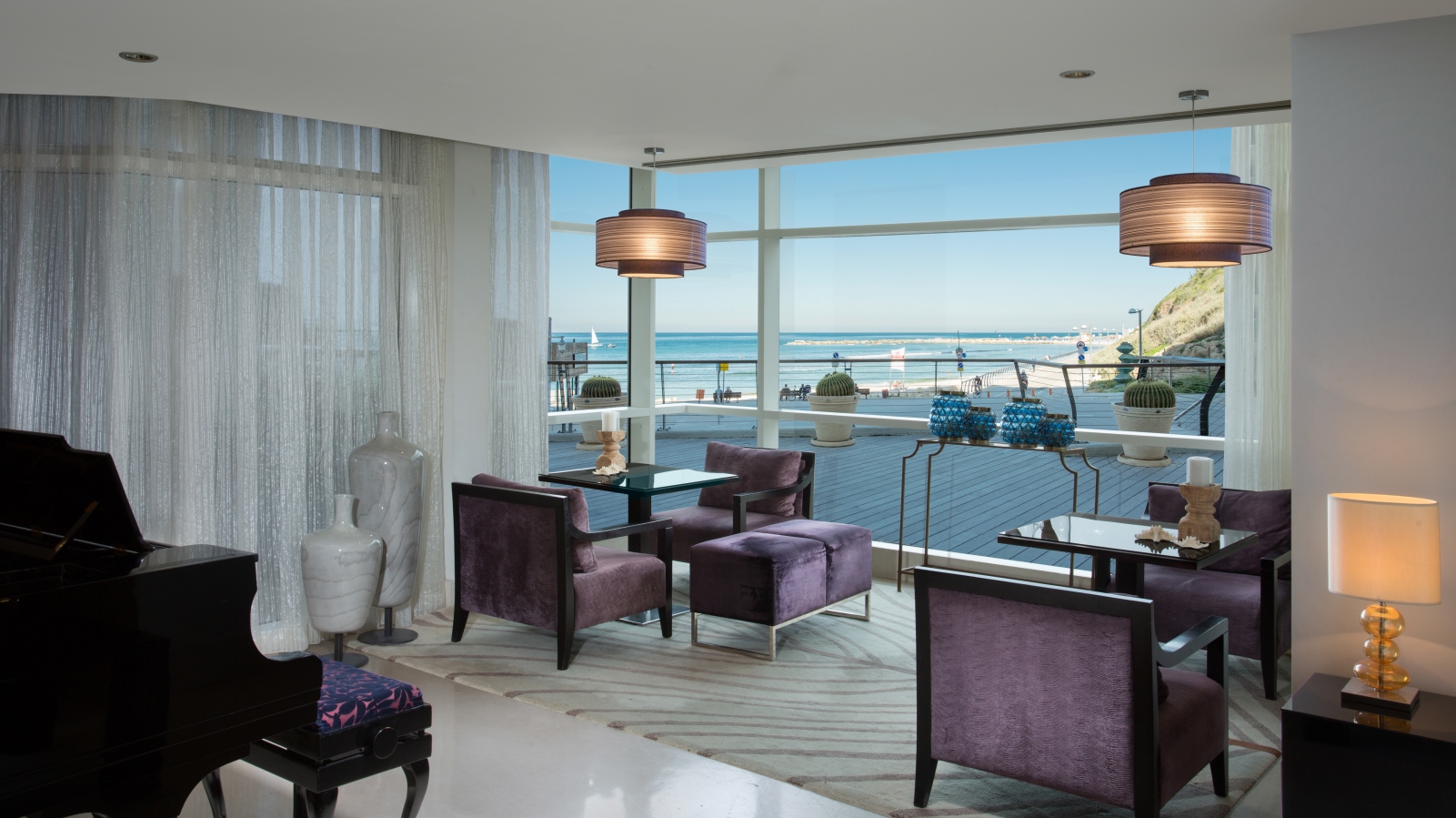 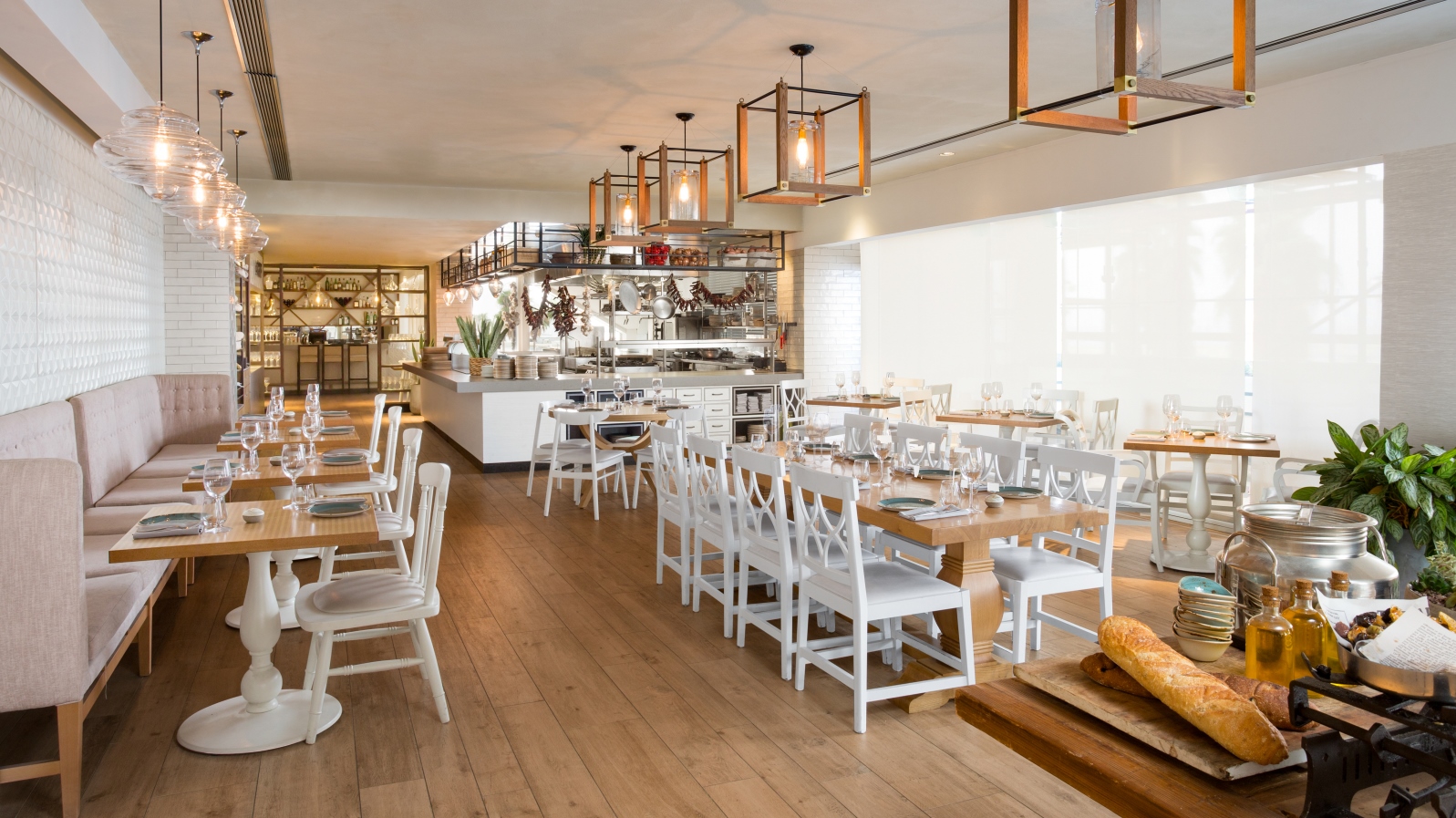 The award-winning Carlton opened in 1981 on the beach and has hosted its share of VIPs in its 268 rooms and suites. A three-year top-to-bottom remodeling finished in 2017 under the supervision of Yaron Tal brought in colors, unique design elements and interiors that complement the surrounding sun, sea and sand.

Two renowned kosher restaurants by Chef Meir Adoni — Lumina inside and Blue Sky on the roof – were opened in the renewed hotel, and David Gerstein‘s happy artworks were hung in the health club, where patrons see a live video feed from the beach via nine large LCD screens. 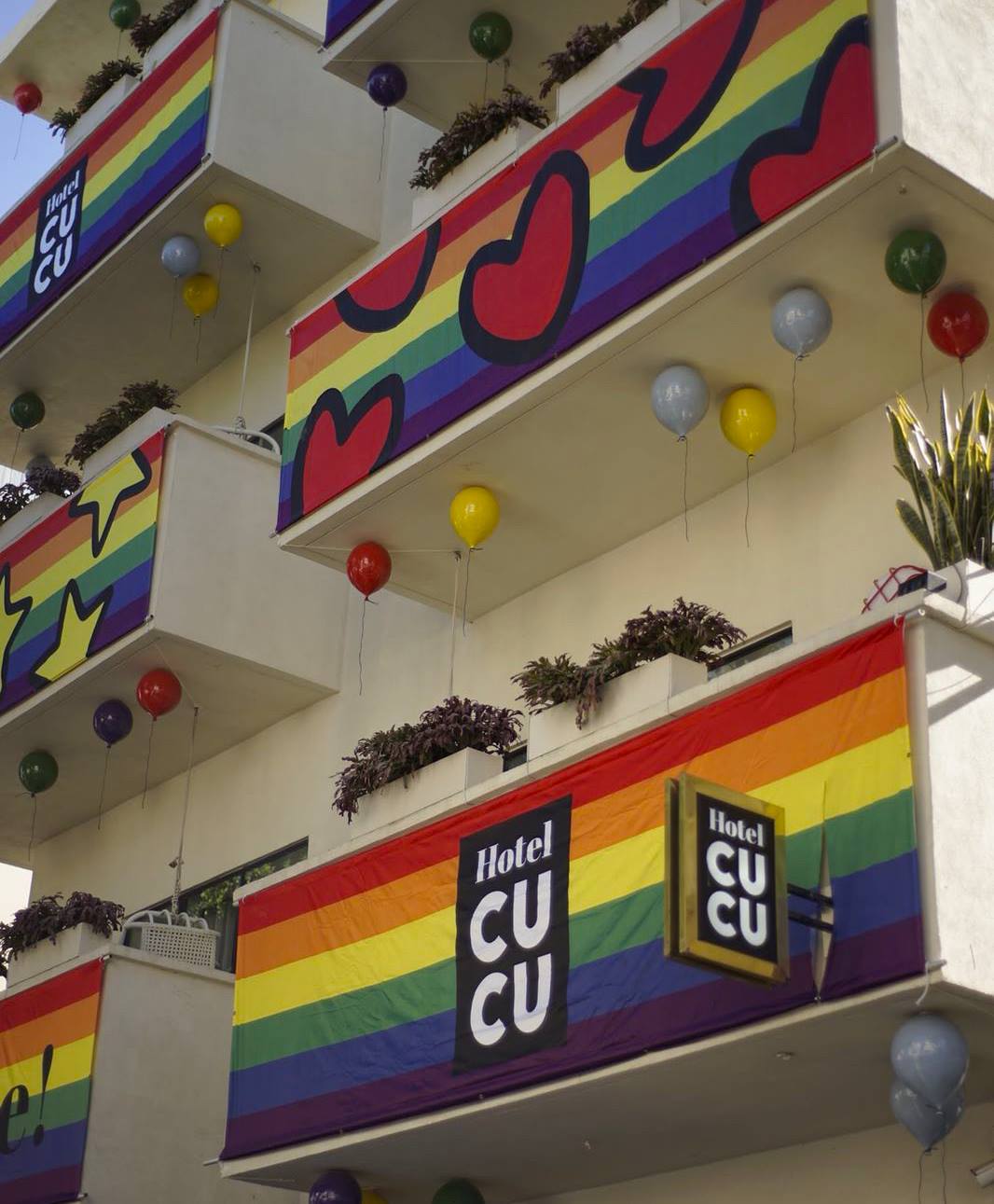 Tel Aviv’s CUCU Hotel, dressed up for Pride Week (the balloons are ceramic and permanent). Photo via Facebook 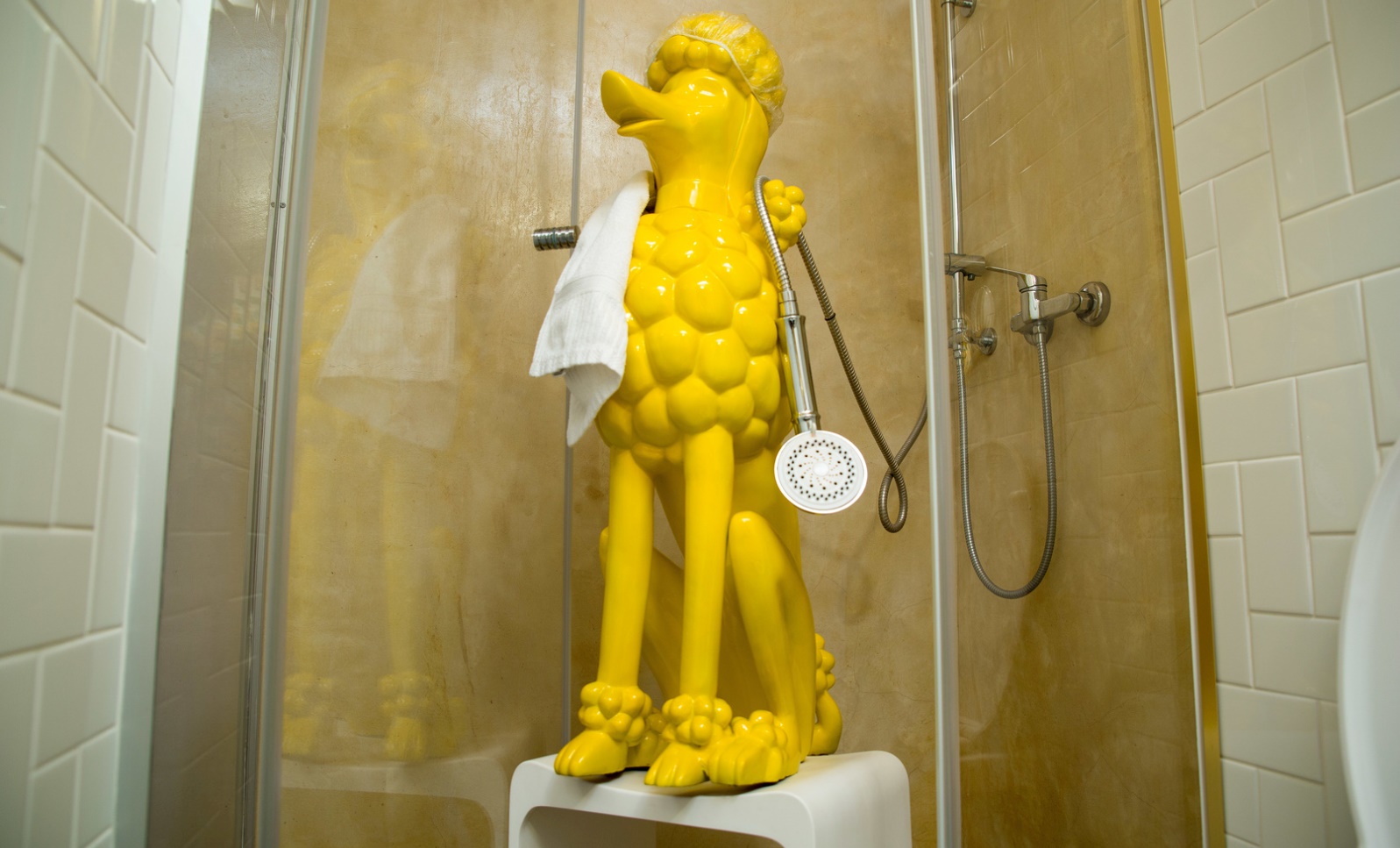 At CUCU Hotel in Tel Aviv, you may find a poodle in your shower. Photo via Facebook

With a name like CUCU, you know the décor will be out of the ordinary. This 32-room hotel goes for whimsy (life-size ceramic poodles in primary colors, ceramic balloons “floating” on the balconies) and big splashy graphics on the walls.