11 ways to survive an Israeli wedding

Follow these tips, and you’re bound to be the life of the party — or at least enjoy the party of a lifetime — as only Israelis know how to do.

So, you’ve gotten an invite to your first Israeli wedding. Mazel tov, you’re about to take part in an extraordinary simcha (joyous occasion), and a brand-new kind of wedding experience!

If you’re wondering what to expect as an honored guest, we’ve laid it all out for you, with our 11 tips for not only surviving an Israeli wedding but living it up to the fullest.

Follow these tips, and you’re bound to be the life of the party — or at least enjoy the party of a lifetime — as only Israelis know how to do.

And we mean hungry with a capital H. Forget a measly portioned sit-down dinner, and appetizers that fit on a toothpick. Israelis go all-out at their wedding celebrations: an entire dinner-like buffet of appetizers with drinks before the ceremony even starts, followed by a full sit-down dinner including meal-sized formal appetizer, salads, main course and dessert.

If you love to dance, filling up on the first round might be your best bet to allow you to get down post-ceremony without feeling any hunger pains.

The logic behind this annoying ritual is that you are symbolically paying for your meal. Israelis don’t have the same tradition that Western countries have where the family of the bride pays for the wedding, so your present is more like chipping in and helping the happy couple pay for the grossly expensive party, than giving a personal gift toward their future.

But there’s no need to buy a fancy Hallmark card. It’s totally mikubal(socially accepted) to take an envelope provided at the entryway (you know, the one with the logo of the venue on it), write your message and stick your cash or check inside. Drop your envelope in the adjacent lock box, and you’re good to go!

Forget any wedding superstitions you may be familiar with. Except for religious couples, Israeli brides and grooms often pose for wedding photos in the afternoon before the ceremony. That means they won’t miss any of the post-chuppah reception, maximizing their dance and party time.

Many brides and grooms also show up during appetizers to greet guests, because who doesn’t want to enjoy every part of their own wedding? 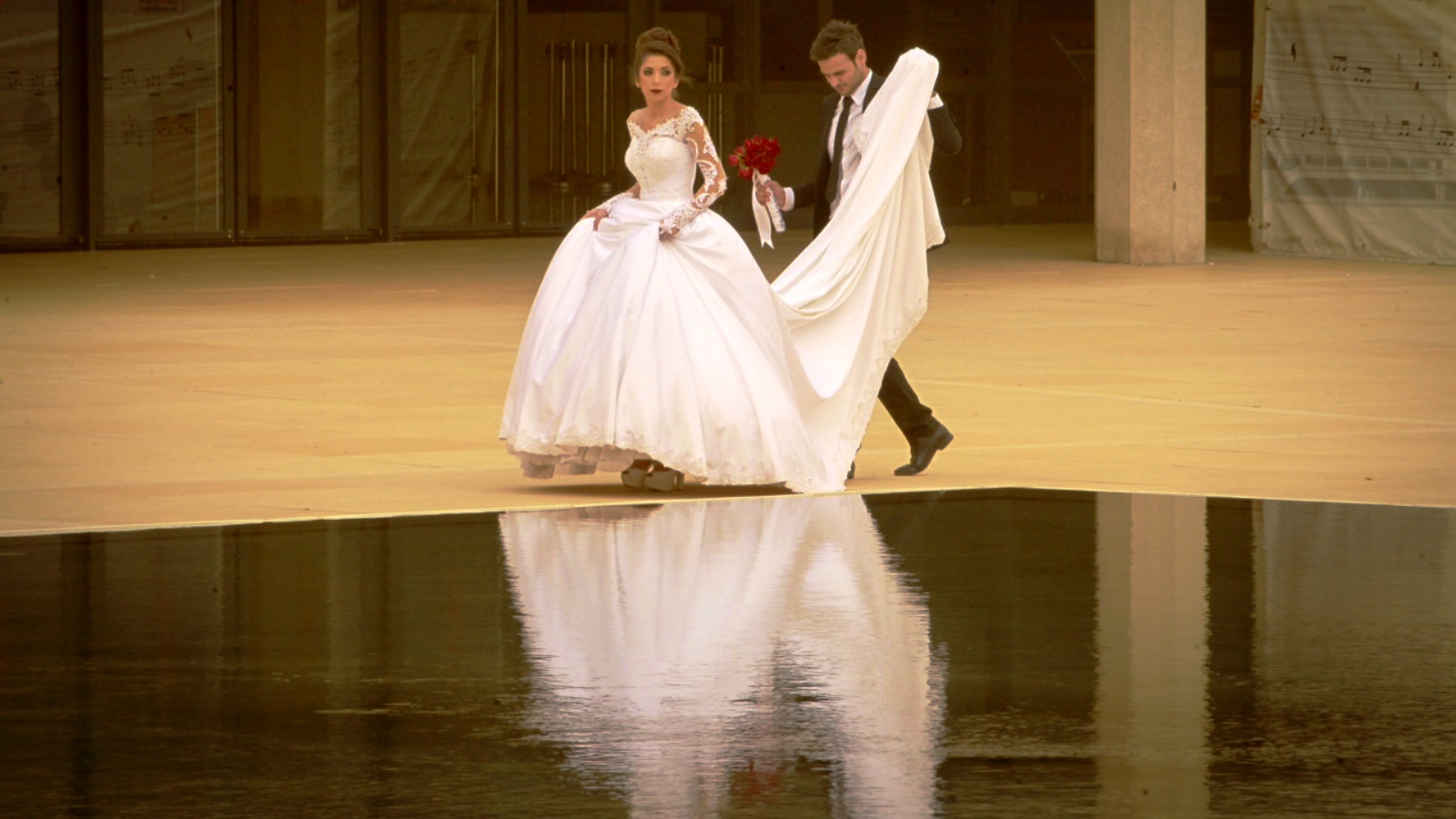 A bride and groom prepare for taking portraits prior to their wedding, in the center of Tel Aviv. Photo by FLASH90

It may sound confusing, but when it comes to Israeli weddings, it’s perfectly normal for a secular couple to have a Haredi (ultra-Orthodox) rabbi lead the ceremony. Alternatively, it’s common for religious Israelis to rock out to Jewish house or techno music during their wedding party.

Religious couples may request that you abide by a modest dress code and their weddings often have gender-separated dancing (and sometimes dining). But you never know what to expect. With Israeli millennials you can count on all kinds of wacky surprises, for instance a formal ceremony followed by a pool party at a villa — keeping it traditional yet casual at the same time.

Don’t be startled — as soon as the groom smashes the glass and the ceremony ends, it’s not uncommon for the DJ to play a popular modern Israeli song at brain-smashing volume. Simultaneously, you might find yourself trampled by the wave of guests rushing up to the chuppah to kiss the newly married couple.

Go with the flow, and get ready to kiss someone who’s just been kissed by 600 friends and relatives (get a jump on the crowd, and you could be No. 5 instead of 500). And only for the truly brave: Take a sip from the ceremonial wine cup that the bride, groom and immediate family drank out of during the wedding ceremony. It’s considered good luck!

Some may dress to the nines for an Israeli wedding, but it’s also totally cool to dress in, well, whatever you want. It’s not uncommon to see one person in a cocktail dress with heels, and another in shorts and flip-flops. Many Israeli grooms don’t even wear a tie or a suit jacket.

We suggest leaving your stilettos at home (we’re not exaggerating when we say your Havianas will do), or at the very least bringing along your flip-flops for the dancing. By the same token, loosening your tie, or maybe just leaving it at home all together, will help you fit in with the crowd and make you feel more comfortable for the happy occasion.

More often than not, there is no wedding cake at Israeli weddings —gasp! This is partly because kosher wedding venues and meat-based meals usually mean a spread of pareve (non-milk-based) desserts instead of a buttery cake. It’s also because what many Westerners think of as the best part of a wedding just isn’t a custom here.

Stick it in the category with other things you might miss at an Israeli wedding, including a bridal party in awkward bridesmaid dresses, and a father-daughter dance. But in the end, all of these missing elements  just allow for more fun time for guests, and less ceremony. Get your tears out during the chuppah, where it really counts.

Israeli weddings can feel more like a club than a family event — if clubs had an open bar and no last call. Drinks are typically served all night, free of charge, and you might even get bottles of soda, wine and maybe even vodka on the table, allowing you to relax and feel like a guest instead of a paying customer lining up to buy a watered-down drink.

Just make sure you have a designated driver to help you get home safely at the end of the night, which could end up being quite late (Israeli weddings typically take place on weeknights after work).

So we said that Israeli weddings are like clubs, but I bet you didn’t think we meant literally. Think again! It seems like an Israeli rite of passage to have wedding music so loud and so techno/house/dance oriented, that Grandma might need to be treated for PTSD afterwards.

It’s not uncommon to see a baby or two as well, sleeping peacefully under a wall of high-volume white noise, often equipped with highly effective earplugs. Carry a pair in your pocket and pop them in when it becomes too much, or else enjoy the ringing in your ears for a full day afterwards.

Yea, we already mentioned it a million times, but it’s hard to overlook the fact that Israeli weddings are all about the dancing. Best brush up on your dance moves before the big day, and we aren’t talking about the Electric Slide kind. Learn some classic Israeli wedding songs like this one and perfect that perplexing go-to Israeli dance move that involves rocking out while alternating lifting your forearms up to chest level, palms open and exposed.

Israeli weddings are big happy family affairs. You won’t find the phrase “no children allowed” on an Israeli wedding invitation (which, by the way, is customarily handed out or WhatsApped only a few weeks or days before the marriage).

So get your smile on. If Israelis do one thing well it’s unabashedly showing their genuine happiness for their friends and family. Be prepared for a lot of smiles, laughs and good vibes. And say “cheese” for the photo magnet souvenir you’ll take home!