The Jordan River baptismal site of Qasr al-Yahud was much more crowded than usual on Monday, April 15, less than a week before Passover and Easter.

To find out why both Christians and Jews were gathering here on this day — the 10th of Nisan on the Hebrew calendar — ISRAEL21c joined a fascinating tour sponsored by the Government Press Office.

Tour guide Katriel Ben David explained that every day of the week, all year long, Christian pilgrims come to the riverbank to immerse their bodies and fill bottles with water to take home from the very spot believed to be where John the Baptist baptized Jesus. 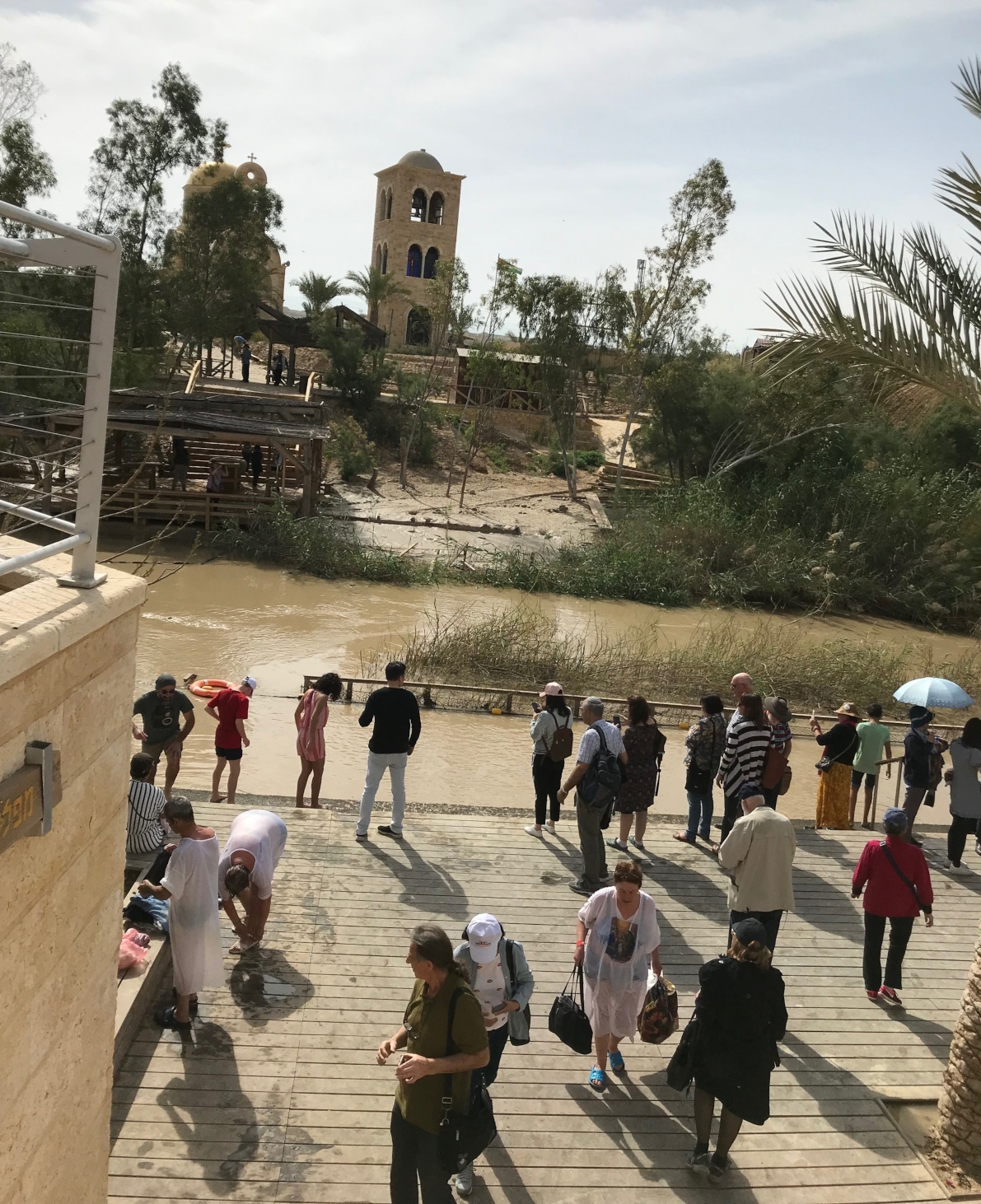 Qasr al-Yahud-Ma’avrot HaYarden facing the Jordanian side of the river, April 15, 2019. Photo by Abigail Klein Leichman

No doubt John and Jesus chose this location because it is believed to be where the Israelites crossed into the Promised Land on the 10th of Nisan 3,440 years ago (some calculate it as 3,293), following their liberation from Egyptian slavery and four decades of desert wanderings.

Three centuries later, the book of Kings 2 records, the prophet Elijah crossed the Jordan right here in the opposite direction and was taken to heaven in a miraculous fiery chariot.

Significant though this location is religiously and historically, geographically it now straddles the Israeli-Jordanian border. That has made the situation sticky at times.

Jordan controlled the pilgrimage site until the 1967 Six-Day War. From then until the 1994 signing of the Israel-Jordan peace treaty, Qasr al-Yahud (Arabic for Fortress or Palace of the Jews) and the seven churches and monasteries in the vicinity were fenced off and surrounded by minefields. 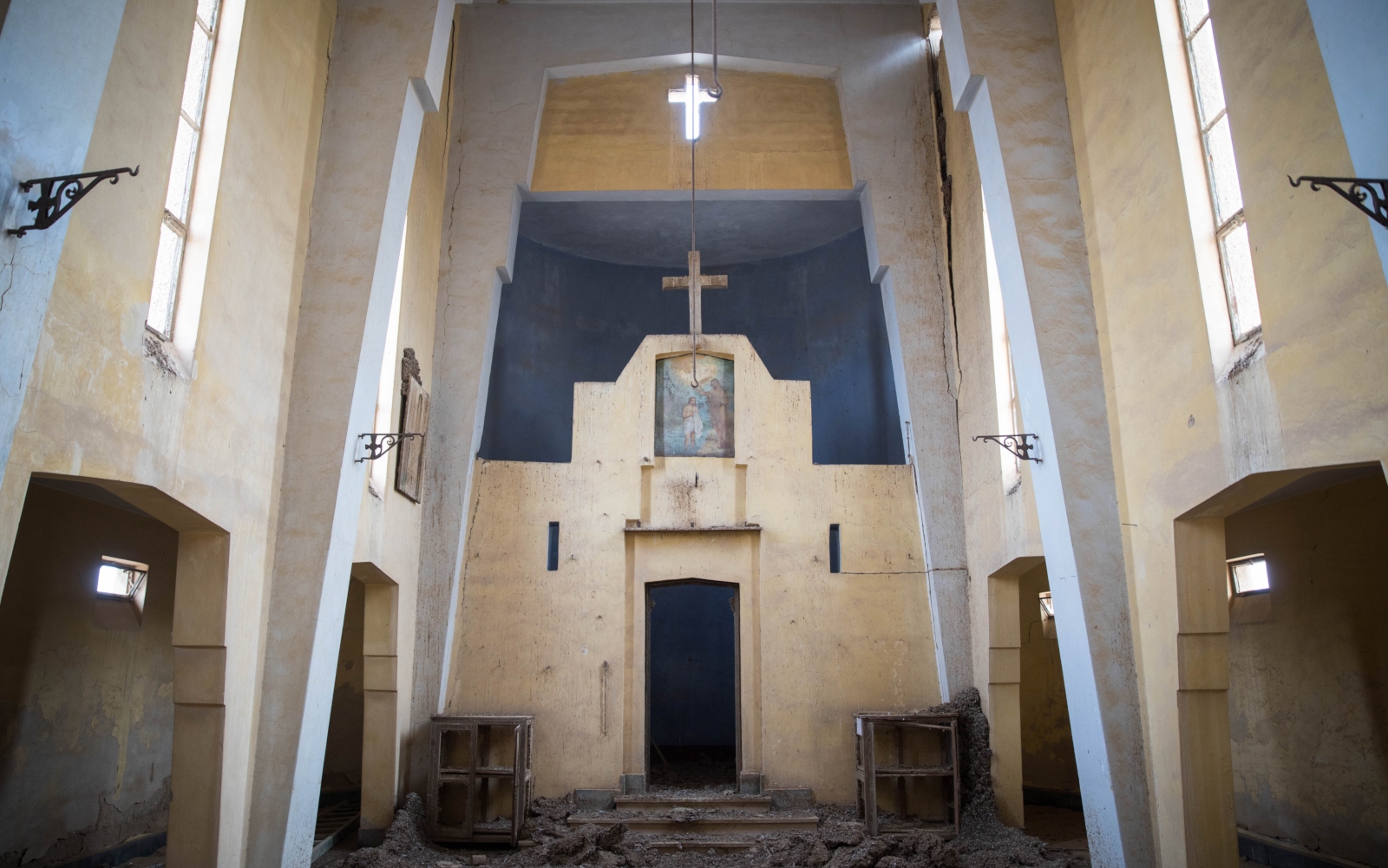 An old Ethiopian Church near Qasr al-Yahud, the place where Jesus is believed to have been baptized. Photo by Hadas Parush/FLASH90

The Israeli government transformed Qasr al-Yahud — in Hebrew, Ma’avrot HaYarden (Jordan Crossings) — into a safe and proper tourist destination, opened in July 2011 under the authority of the Israel Nature and Parks Authority (INPA). 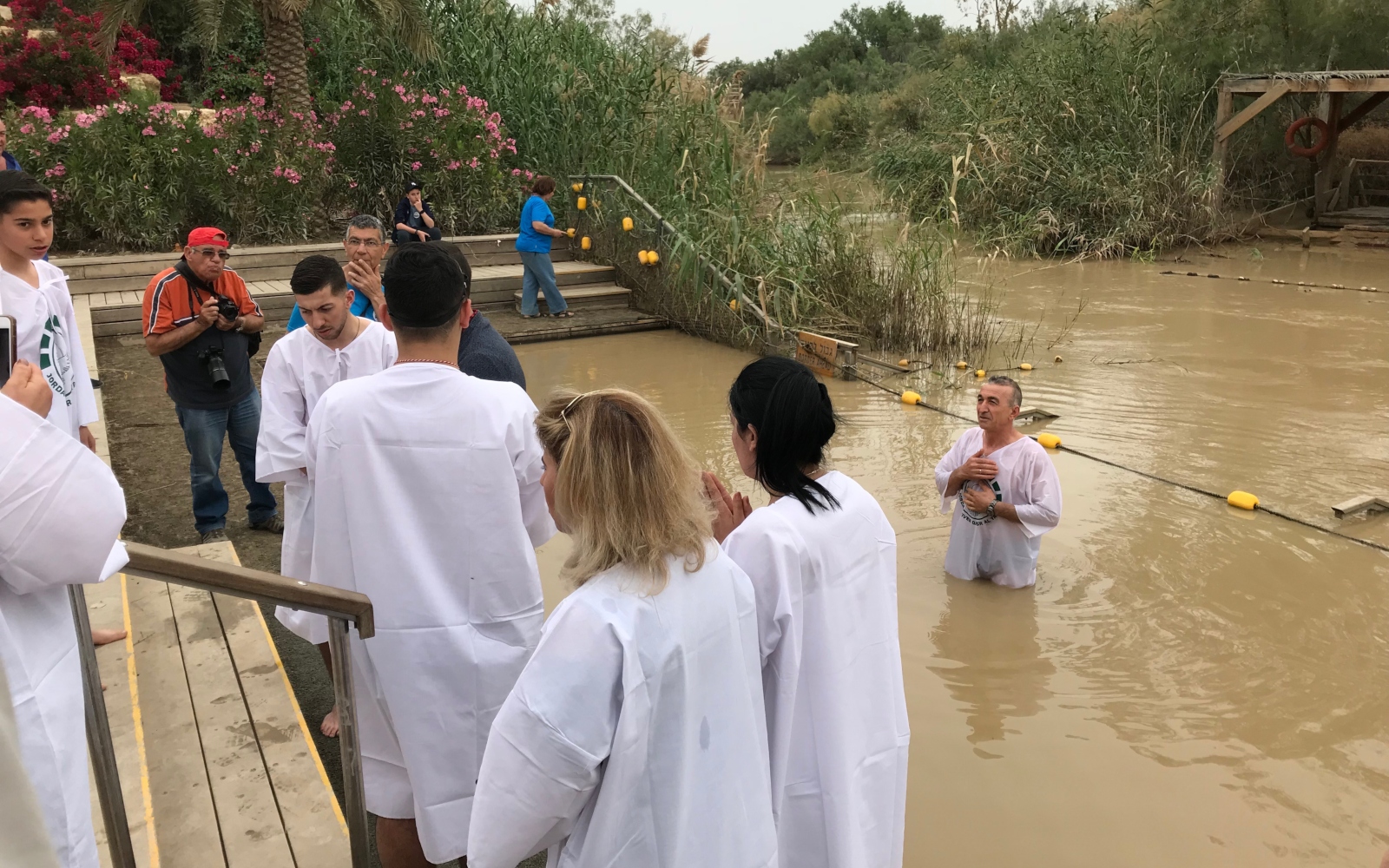 More than 800,000 visitors came to the baptismal site in 2018. Ben David told us there’s usually a moment of surprise upon seeing how the once mighty waters have been reduced in modern times to a brownish stream.

“People who read the Bible and live the Bible come here and see this ‘puddle’ and are very disappointed,” he said.

But as we could see for ourselves, the disappointment quickly gives way to excitement. One after the other, Christian tourists of all ages were dipping in the historic river with reverence and joy. (INPA reportedly checks the water quality weekly to make sure immersion is safe.)

Jewish visitors generally don’t enter the water, but for them this day was marked with a special ceremony commemorating the 10th of Nisan, a new tradition that’s been catching on with the Israeli public in recent years. Seventeen busloads of Israelis came to hear a choir and a speech by former Tel Aviv Chief Rabbi Yisrael Meir Lau. 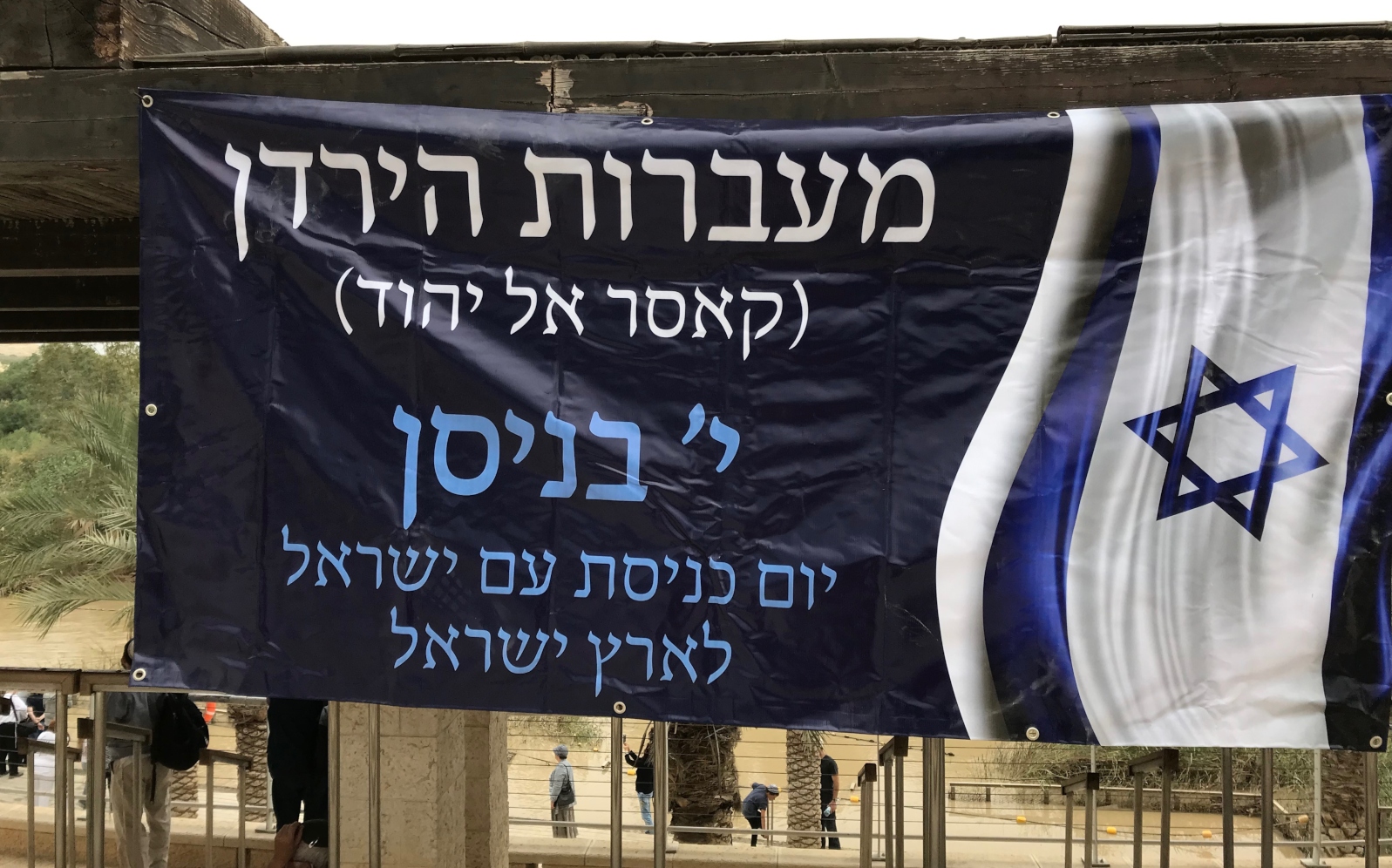 Sign posted on the 10th of Nisan (April 15, 2019) for a ceremony commemorating the crossing of the Israelites through the Jordan River more than 3,000 years ago. Photo by Abigail Klein Leichman

According to the biblical book of Joshua, when the Israelites reached the banks of the Jordan the members of the priestly class entered the overflowing river first, carrying the Ark of the Covenant. And immediately, “the water which came down from above stood and rose up in a heap,” and the waters coursing down toward the Salt (Dead) Sea were cut off, enabling the entire nation to cross over in a miraculous way similar to the crossing of the Red Sea 40 years earlier.

“This is a place with a lot of energy, a place of belief,” Ben David told us. 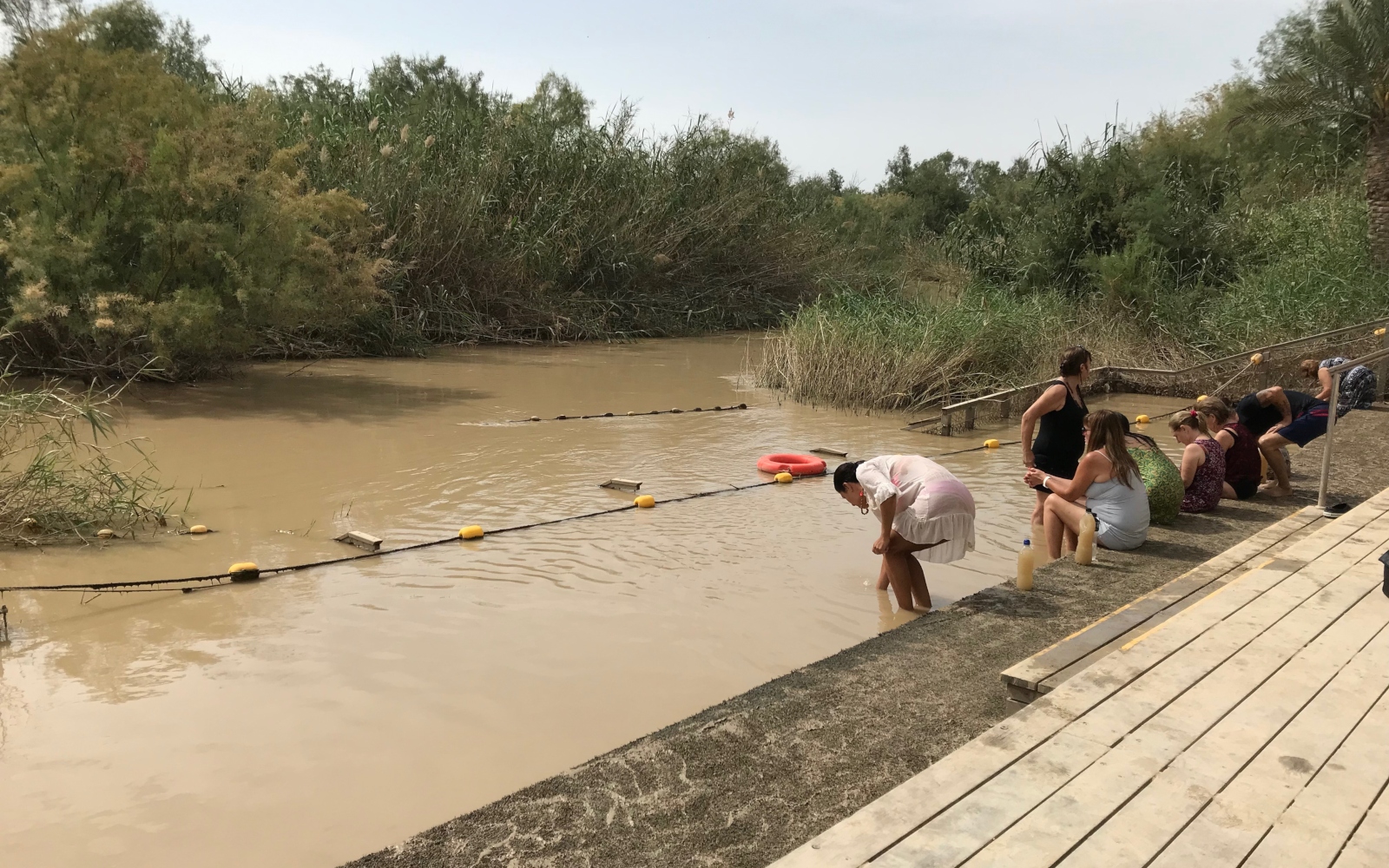 If you’re planning a visit, rest assured that the site is clean and well maintained. Located on the western bank of the Jordan River several miles east of Jericho and north of the Dead Sea, Qasr al-Yahud has shaded sitting areas, restrooms, changing rooms and showers, a chapel and a snack bar. The baptism area is not wheelchair-accessible.