Few visitors to Auschwitz-Birkenau death camp pass through Poland’s Oswiecim. That might change as sites tied to the city’s Jewish past are preserved, restored, and digitized.

Eighty years after the Great Synagogue of Oswiecim was set ablaze by the German occupiers of Poland, a memorial park will be built where the legendary shul once hosted up to 2,000 worshipers.

Located a few miles from the former Nazi death camp Auschwitz-Birkenau, the Great Synagogue of Oswiecim was the centerpiece of a thriving, 400-year-old Jewish community. Some of Poland’s leading Jewish scholars came from Oswiecim — renamed Auschwitz in German — and Jewish families set up some of Poland’s first factories there.

The new memorial park is set to open on November 28, exactly 80 years after the lavishly appointed Great Synagogue was demolished by the Nazis. In attendance at the opening will be descendants of Jews who once called Oswiecim home, as well as current residents of the town.

A project of the Auschwitz Jewish Center, the memorial park is one of several sites managed by the organization. Chief among them is the so-called “Auschwitz Synagogue,” built in 1913 and the only Jewish house of worship that survived the Nazi onslaught intact. The modest prayer hall has been restored and connected to an adjacent building with a small Jewish museum. Together, they comprise the Auschwitz Jewish Center’s headquarters. 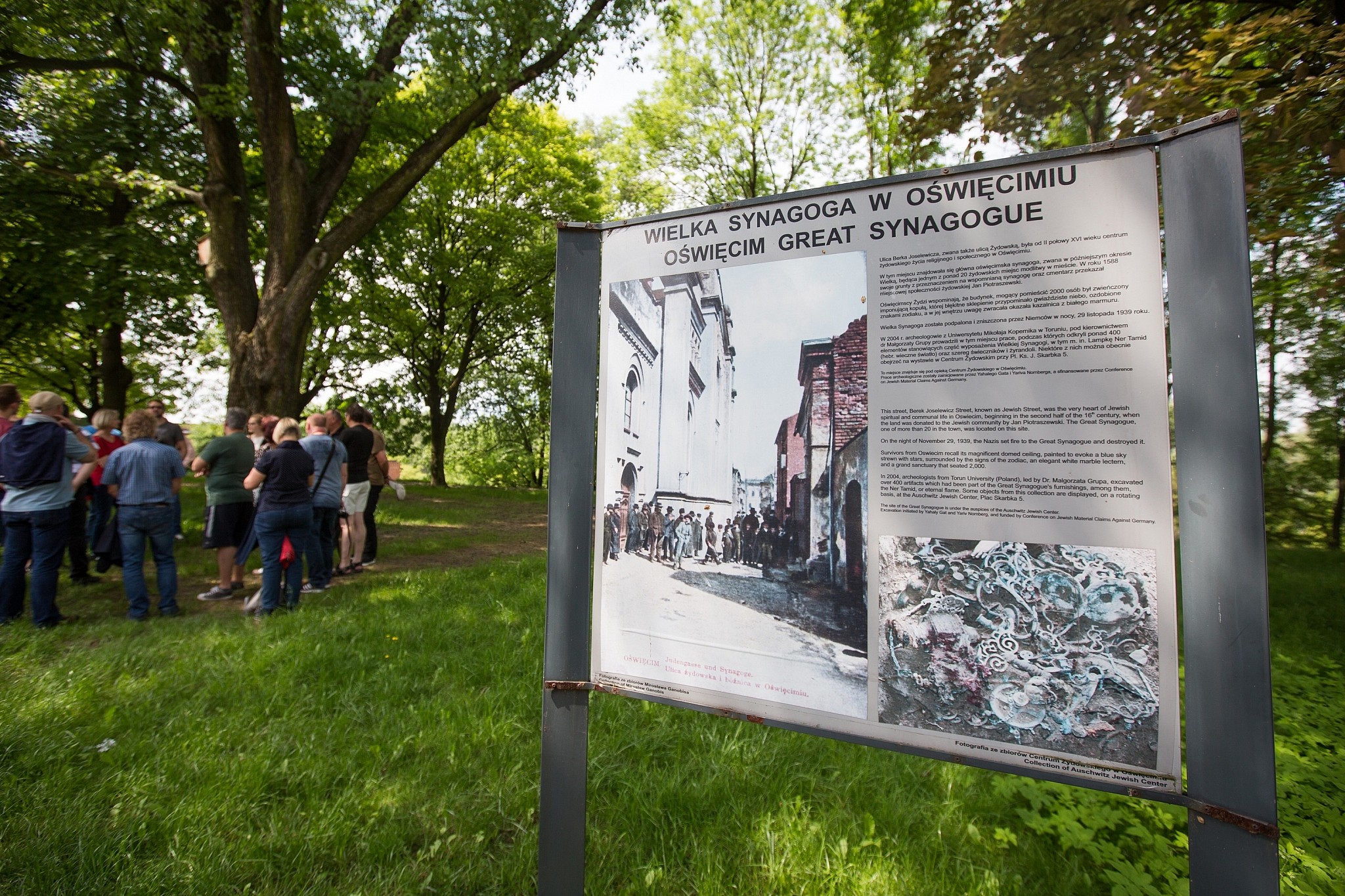 Site of the coming memorial park where the Great Synagogue of Oswiecim, Poland, once stood, May 2019 (Elan Kawesch/The Times of Israel)

“The memorial park is another project to commemorate and educate about the destroyed Jewish community which until the war constituted nearly 60 percent of the town next to the site of Auschwitz,” said Tomasz Kuncewicz, the Auschwitz Jewish Center’s director, in an exchange with The Times of Israel.

“It is a project connecting the current non-Jewish residents of the town and the descendants of the Oswiecim Jews living in Israel and other countries around the world,” said Kuncewicz, who pioneered the use of apps to teach visitors to Oswiecim about the city’s Jewish history.

To fund the project, the Auschwitz Jewish Center conducted crowd-funding campaigns in Polish and English, said Kuncewicz. Each of the campaigns yielded about 100 donors, including current residents of Oswiecim. 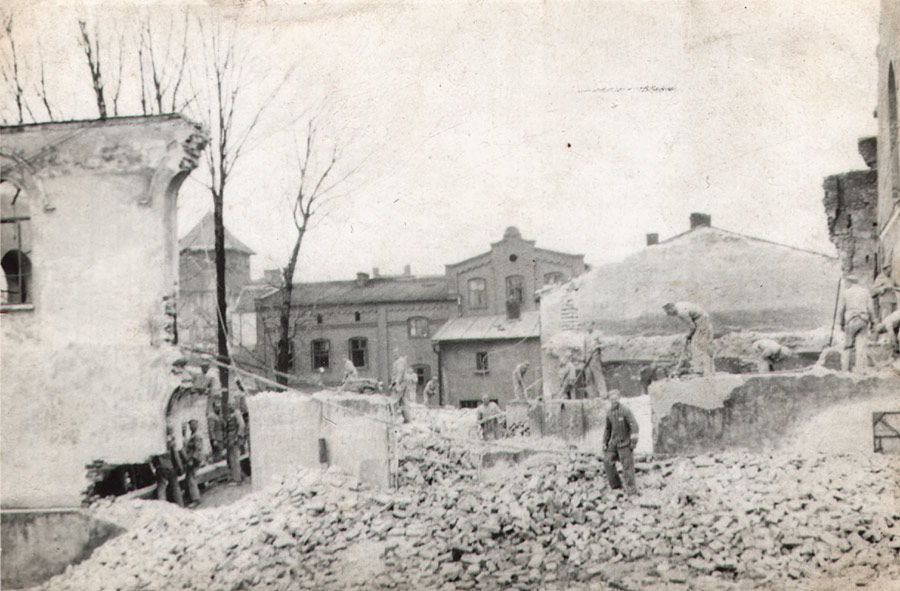 In Oswiecim, Poland, during the Nazi occupation, workers from Auschwitz dismantled the Great Synagogue that was burned down in November of 1939. (Auschwitz Jewish Center)

Among the legends associated with the Great Synagogue, a Simchat Torah “death dance” once brought out the departed spirits of Oswiecim’s Jews for a night of mystery. One of the most astounding tales about the house of worship, however, took place more recently.

‘A welcoming and reflective space’

The Jews of Oswiecim had some warning time before the Nazis occupiers set the Great Synagogue ablaze in November of 1939, and they put it to good use.

Underneath a floor near stairs leading up to the women’s gallery, a trove of sacred items was hastily buried. The Torah scrolls, candlesticks, and prayer books were placed in the ground without any coverings or container.

More than six decades after the clandestine burial, former Oswiecim resident Yariv Nornberg told archeologists about the secret cache. He’d heard about the burial from another Oswiecim native, completing a circle that helped researchers find the items.

Toward the end of excavations in 2004, archeologists found the shul’s Eternal Light, 10 chandeliers, a bronze menorah, and the remains of holy books. At other locations on the grassy plateau, objects pulled from the earth included the remains of charred pews and marble decorative elements.

According to archeologists, a remarkable aspect of the unearthed Great Synagogue artifacts has to do with the site’s use during World War II. Following clearing away of the synagogue’s rubble, the ground was “crisscrossed” by the construction of shelters. Despite all this human activity, the treasures a few inches below the ground remained untouched — or at least some of them did.

During the next five months, the land on which the Great Synagogue stood will undergo its latest transformation. The shul’s former perimeter will be marked by a curb and greenery, and a small portion of the excavated original floor will be displayed for visitors. 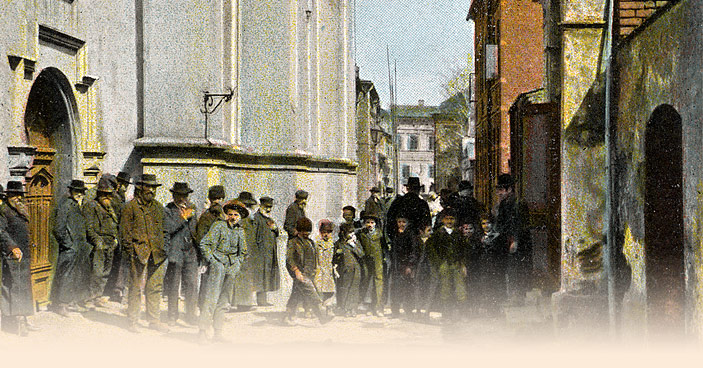 A colorized photo of the Great Synagogue, left, which dominated the ‘Jewish street’ in Oswiecim, Poland, prior to its destruction by the Nazis in 1939 (Auschwitz Jewish Center)

“The focus will be on the biodiversity and on making it into a welcoming and reflective space,” said the Auschwitz Jewish Center’s Kuncewicz, who advocated for a “minimalist” approach to on-site construction.

Viewed from above, the park’s main feature will be large recycled stone slabs arranged as a path to symbolize the destruction, said Kuncewicz. To encourage use of the space, benches will be placed along with a model of the candelabra found in 2004. The replica will hang between trees near the center of the former synagogue. 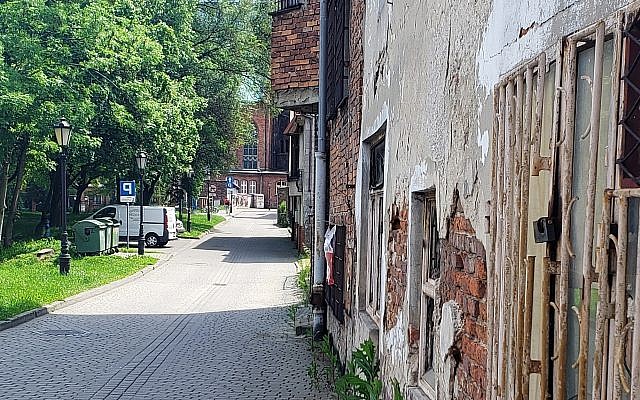 Former ‘Jewish Street’ in Oswiecim, Poland; the facade of the Great Synagogue was located near the grass, May 2019 (Matt Lebovic/The Times of Israel)

‘A broken star of David’

After the Holocaust, several dozen Jews returned to Oswiecim, the remnant of a community that numbered at least 6,000 before the war. As in other parts of Poland, many of these survivors were displaced again when they fled the country beginning in 1946, after the Kielce pogrom, or in later years during waves of state-sanctioned anti-Semitism.

The Great Synagogue Memorial Park of Oswiecim will acknowledge this complex past with its symbolic installation. Visitors will peer into a large triangular structure to see historic photographs of the synagogue, with the triangle symbolizing both a broken star of David and – according to Kuncewicz — directions in which Holocaust survivors emigrated from Poland after 1946. 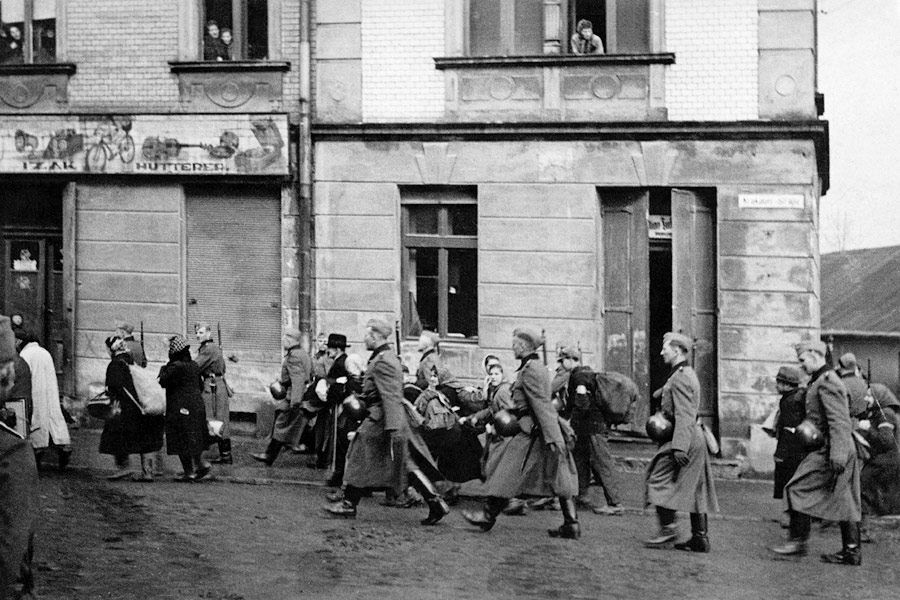 One of several photographs taken during the deportation of Oswiecim’s Jews to ghettos in the region during the Nazi occupation of Poland. (Auschwitz Jewish Center)

The triangle motif occurs throughout properties managed by the Auschwitz Jewish Center, including in part of the square adjacent to the small Auschwitz Synagogue and Jewish museum. In that square, 5,000 of the town’s Jewish residents were gathered prior to being deported to several ghettos, and from there to death camps.

A stone’s throw from where the Great Synagogue stood is the location of the former Haberfeld House, once home to the town’s most famous Jewish family. For generations, the family distilled vodka and produced other beverages for use in Poland and to export around the world. Their mansion and adjacent distillery were demolished in 2003, and a Hampton Inn by Hilton recently opened on the site. 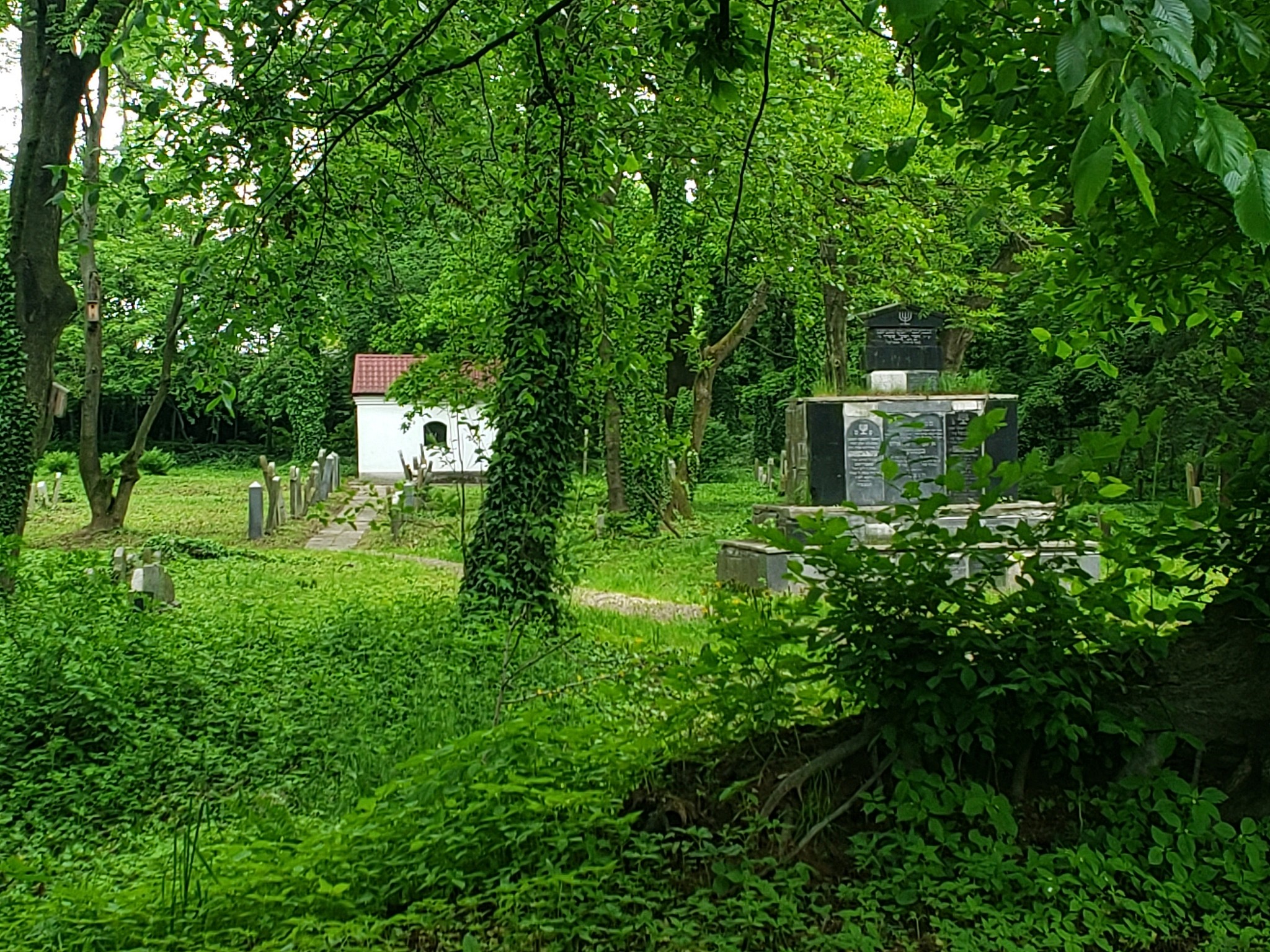 The only remaining Jewish cemetery in Oswiecim, Poland, May 2019 (Matt Lebovic/The Times of Israel)

Oswiecim’s only remaining Jewish cemetery is a 15-minute walk from the city’s historic core. The grounds shrunk significantly since 1939, when the cemetery covered what are now adjacent roads and parking lots. The placement of several dozen tombstones in recent years can only be symbolic, since the original grave markers were removed by the Nazis or used in post-war building efforts.

Covered in ivy and moss, the tree-filled cemetery has two relatively new burial tombs. One is for Shimshon Kleuger, who was known as “the last living Jew in the city of Auschwitz” until his death in 2000.

For decades after the Holocaust, Kleuger lived as a hermit in his family home adjacent to the Auschwitz Synagogue. Townspeople placed food, water and coffee in a bucket for him, and journalists dared not knock on the feisty Kleuger’s door.

In 2014, the Auschwitz Jewish Center turned Kleuger’s former home into an Oswiecim-themed café, called Cafe Bergson. A deep mezuzah indentation can be seen next to the burgundy door, close to where people anonymously left Kleuger the necessities of life.

Inside the restored building, a collection of books, postcards and memorabilia recall the past of Oswiecim, which was known as “not a bad place to live” among Polish Jews. The cafe also hosts lectures about the history of Oshpitzin — the Yiddish name for Oswiecim, which means “guests.” After four centuries of relative prosperity in Oshpitzin, Jews proved to be temporary guests.

Currently, the Auschwitz Jewish Center receives a few hundred visitors a month, whereas more than 2.1 million people visited Auschwitz-Birkenau last year. With developments like the “Oshpitzin” app, the museum’s Cafe Bergson, and the coming Great Synagogue memorial park, Oswiecim the erased “city of Israel” is again being turned into a welcoming place for Jewish guests.

By Matt Lebovic  (The Times of Israel)