‘Window Stories’ is made of 550 windows of all shapes, sizes and provenances salvaged from across the capital city.

“Window Stories,” a towering installation made of 550 windows salvaged from across the city, in a variety of shapes and styles from different eras, is open free to the public through September 21 in Jerusalem’s Gan HaSus (Horse Garden) on King George Street downtown.

This palace of windows was created by Yoram Amir, Itamar “Faluja” Paloge and Lior “Lili” Peleg in conjunction with the upcoming annual Mekudeshet cultural festival in the capital city.

There’s a wooden English window alongside an Armenian hatch-window, an Ottoman decoration next to a Christian creation, a frame in the shape of a Star of David attached to an Arabic arch – and much more. There are even windows from the precursor to the Waldorf Astoria hotel and from market stalls.

As night descends, a spectacular set of lights transforms the window tower into a glittering lighthouse.

“On a night of languages, voices and cultures that do not always get along together, [we] will unite to form one house that has more open windows than hidden walls,” the creators proclaimed. 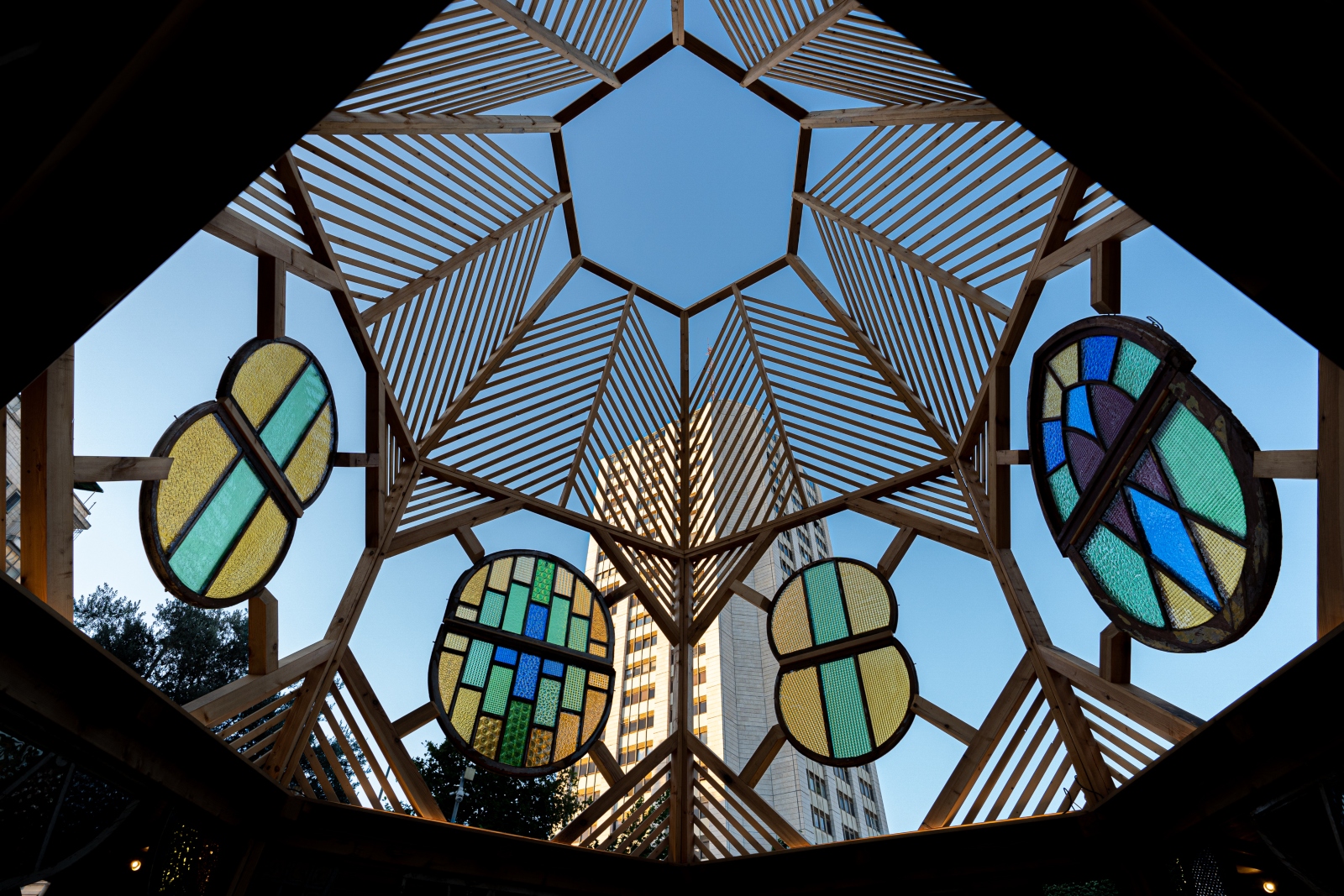 Looking up through the Window Stories exhibition at Jerusalem’s Gan HaSus. Photo by Daniel Hanoch

The windows were collected and preserved for decades by the late Yoram Amir, described as “an artist, activist, photographer, Don Quixote, prophet, and, more than anything, a lover of people and Jerusalem.”

Amir salvaged the windows from abandoned buildings or buildings slated for demolition. Just before his death, he joined forces with Mekudeshet, the Jerusalem Municipality through Eden, the Jerusalem Center Development Company, and the artistic duo of Paloge and Peleg to construct this majestic exhibition unveiled July 7.

Visitors to Window Stories can listen to podcasts in Hebrew, Arabic and English, telling Yoram’s story and the story of the window palace to children and adults. Each Wednesday, the site will host artistic and musical activities for the whole family.

On the opening night of Mekudeshet on September 4, Amir’s last home — not far from Gan HaSus — will be open to the public and screen a new video by Arik Futterman describing Amir’s life and work. The following day, a mini festival in tribute to Amir will happen at the installation site and throughout the city with participating artists who knew him.