From lion cubs to antiviral masks, here are some unusual ways Israelis and their UAE counterparts are reveling in the start of diplomatic ties.

The historic announcement of full diplomatic relations between Israel and the United Arab Republic already has brought numerous medical, scientific, business, and cultural collaborations in its wake.

And it has brought to light many off-the-radar deals between the two countries that started well before the Abraham Accord was announced on August 13.

Here are six unusual things happening between Israelis and Emiratis that you may not have heard about. Israel-based LeapLearner, a K-12 coding education company with over a million students in 20-plus countries, opened an office in Dubai and is bringing together 200,000 Emirati and Israeli students to collaborate on developing Python-based apps.

“We are very excited to celebrate this historic peace agreement through collaboration among our students in both countries,” said George Varghese, LeapLearner UAE CEO.

“We strongly believe that students in the United Arab Emirates and Israel will benefit from this partnership and enjoy learning app development together.”

“LeapLearner has been extremely successful in Israel,” said Roi Sukenik, LeapLearner Israel’s CEO. “Working together with the amazing students of LeapLearner UAE will allow our students to become global citizens and messengers of peace.” Six of the Emirates’ distinctive landmarks were sculpted from the sand at Tel Aviv’s Geula Beach by sand artist Tzvi Halevi, alongside the greeting “Welcome” in Arabic, Hebrew, and English.

“As Israel and the UAE welcome a new era in regional relations, Tel Aviv-Yafo is eager to attract and welcome new visitors to the city from the Persian Gulf state,” said Sharon Landes-Fischer, acting CEO of Tel Aviv Global & Tourism.

“An estimated flight time of only three hours between the countries ensures that both destinations are mutually attractive for potential tourists and business people alike.”

Dr. Rabih Abi Nader, an oral surgeon in Dubai, is so keen on made-in-Israel antimicrobial SonoMasks that he not only bought some from Sonovia Tech but also took selfies showing him wearing the mask in front of Dubai landmarks (such as the ones sculpted in the sand by Tel Aviv artist Tzvi Halevi, above).

The zinc oxide nanoparticle-embedded washable facemasks are lab-verified to destroy over 90% of SARS-CoV-2 within two hours.

“SonoMask is already in use in dental clinics in Dubai Sky Clinic, and the hotel service industry has separately been approached. Our product is already helping to protect the citizens of Dubai.” 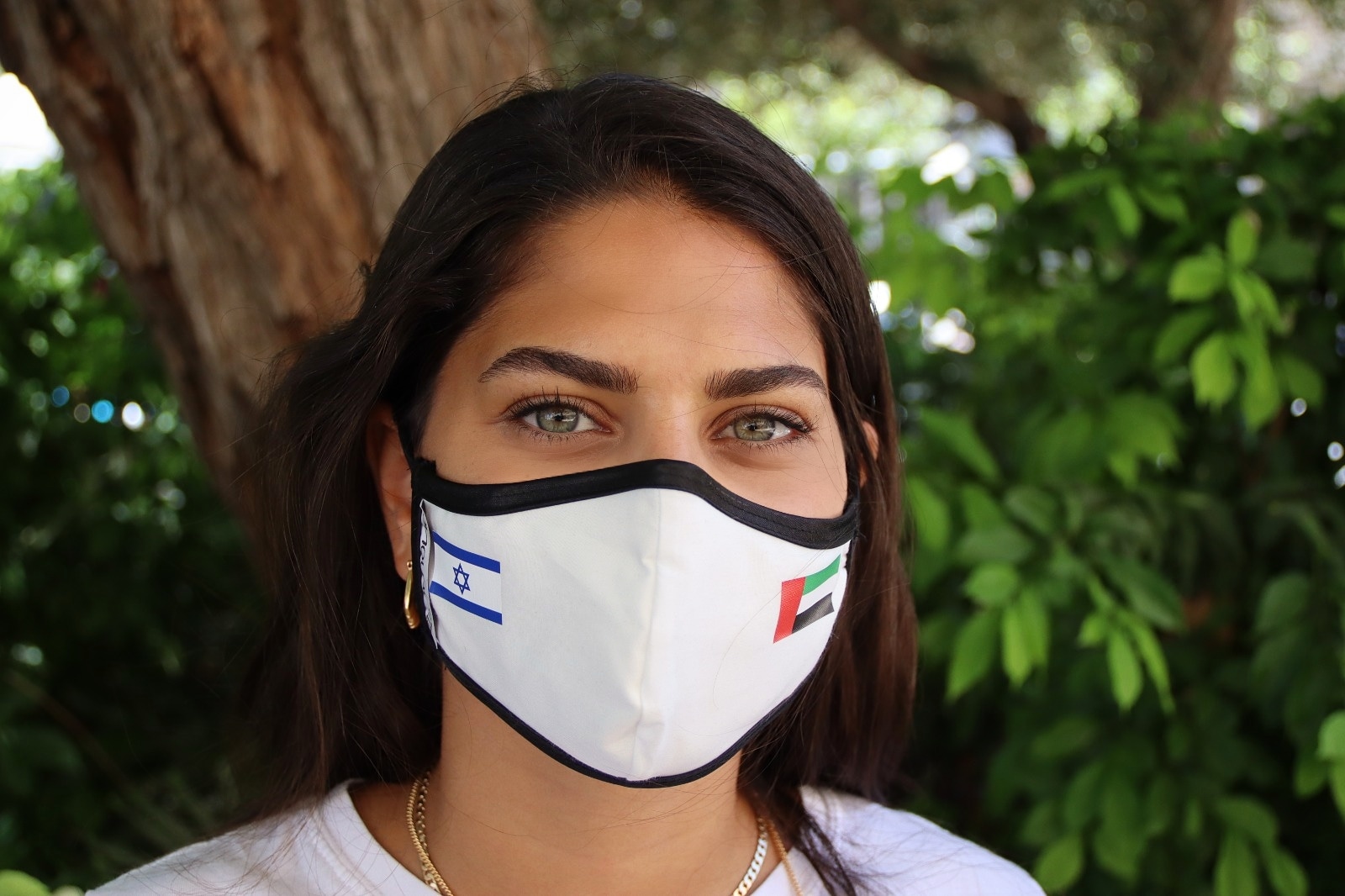 Lions in Jerusalem and Abu Dhabi are joining paws in friendship, at least virtually.

The rapprochement began with a social-media message (“Can’t wait to become friends!!”) from the Jerusalem Biblical Zoo to Abu Dhabi’s Al Ain Zoo on August 17.

This may be only the beginning of some beautiful four-legged friendships. Of course, Israelis are also eager to visit the famed emirates of Abu Dhabi and Dubai.

Just days after the Abraham Accord was announced, Tel Aviv-based tourism agency Aviation Links inked an exclusive deal with luxury hotel chain Rixos, which operates in countries including the UAE.

The vacation packages will be available for now to any Israelis already holding special visas to enter the UAE. After the treaty is officially signed, a marketing campaign will be launched to the general Israeli public.

The price for a five-day family package at Rixos’ Dubai and Abu Dhabi hotels, including flights, will start at $1,389 per person.

Single in the UAE

About a year ago, a publisher from the UAE contacted Elyakim Kislev through the website for Kislev’s book, Happy Singlehood: The Rising Acceptance and Celebration of Solo Living.

Hebrew University professor’s provocative book is being translated into Arabic for sale in the UAE.

The publisher was interested in buying rights to the book to translate and sell it in the Emirates.

“I thought they just didn’t notice where I’m from since the book is in English. But apparently, it all went smoothly. Late last year, they signed the contract with my publisher, University of California Press.”

The book is about changing attitudes in a world in which people are marrying later or not at all by choice.

“The book is already quite provocative, even for Western societies, and I only wonder what its reception will look like in the Arab world. I write on the Arab world in my book, so I know that singlehood is quite prevalent there now,” says Kislev. “In fact, the UAE government decided to subsidize weddings to encourage young people to marry.”

Kislev expects the Arabic translation of his book to be ready in the coming months, probably soon after the peace contract is finalized.