Tales from the heart: Hugs and couscous in the ancient city of Tzfat

With its archaic cobblestoned streets and mountainous backdrop, this small, quaint city is where my grandparents built their home and their family.

I arrive at my aunt’s house in Tzfat and knock on the door. I’m only being polite — everybody keeps their doors unlocked in this quaint Upper Galilee city, also called Safed or Zefat.

My aunt calls out for me to come in, and I brace myself for the warm, affectionate hugs she smothers me with.

She ushers me toward her back porch and I join her and her neighbors for a chat, coffee, and all kinds of fruits and nuts. She has perpetual company. Neighbors and friends are always popping in and out of her comfortable home in northern Israel.

My Tunisian grandparents arrived in this small city in 1956 and made it their home. Once the Tunisian government expelled the Jewish people, an influx of refugees escaped by boat and were cramped inside tents until they could afford their own housing. My Saba and Safta (grandfather and grandmother) bought a house in Tzfat after one year.

I’ve been coming to this city since I was two years old. I live in the United States, but my dad’s four brothers and three sisters remained in Israel and raised families of their own.

While sitting on my aunt’s porch, a soft breeze sends chills down my spine.

It’s only fitting — in Kabbalistic teaching, each one of Israel’s “Four Holy Cities” (Jerusalem, Tzfat, Tiberias, Hevron) corresponds to a different element of Earth. Tzfat represents wind (ruach), and many ancient mystics claim that there is no air in all of Israel as pure as the air in Tzfat.

It is also generally accepted that God speaks to us through the ruach, so many people live in Tzfat to feel more spiritually connected.

Jewish mystics have remained an integral part of Tzfat’s community for centuries since the Spanish Jews fled the Inquisition and claimed this mountaintop city as their home.

Legend has it that Spanish authorities wanted to convert the original Abuhav Synagogue in Spain into a church, but the 15th century Kabbalist Rabbi Isaac Abuhav magically transported the synagogue to Tzfat where it still stands today.

Like most synagogues in Tzfat, the Abuhav Synagogue is tucked inside the Old City’s narrow cobblestone alleys and is rather difficult to find. Even once located, you must go through three different entrances until you get to the actual place of worship. This was purposely done to give visitors time to compose themselves.

The interior of the Abuhav Synagogue is embedded with symbolism. The Kabbalah teaches us that there is a mystical connection between numbers, our lives, and events. For this reason, every principle of design in this synagogue has a numerical purpose.

For example, there are six steps leading up to the reader’s platform (bima), representing the six days of creation before God reached the final day of spiritual rest and enlightenment.

The synagogue’s domed ceilings are embellished with pictures of dainty musical instruments once used in the Jerusalem temple, as well as symbols of the 12 tribes of Israel.

Apart from the old synagogues in Tzfat, a steep rusting staircase — The Great Stairs — sits in the middle of the Old City separating the Jewish Quarter from the Artist Colony.

Although the entire Old City looks like a page taken out of a sketchbook, the Artist Colony is special for keeping its antique charm while still producing unique and innovative designs.

series of narrow art studios abound on Gallery Street and are open to the public, selling anything from jewelry to paintings to carpets. As you admire the art, you also feel a part of the artistic process.

My favorite shop on the street is the Safed Candle Factory. There, you are blown away by complex wax sculptures depicting everything from religious scenes from the Torah to satires of modern-day events, and even typical Shabbat and Havdalah candles.

Tzfat is a city that reflects what was, and not what is, of Israel.

For example, all the buildings in the Old City are structured in stone that dates back over 200 years.

Several walls throughout the city are painted blue because in Kabbalistic philosophy this color symbolizes water, which is supposed to trick evil spirits into thinking they cannot pass.

Cars are prohibited in the Old City. This not only preserves the ancient streets but also contributes to the calm and spiritual tranquility of the area.

I’ve toured many historical landmarks of Tzfat with my dad, who as a young kid during the 1973 Yom Kippur war, still holds a strong connection to his city in his heart.

Throughout the Old City, you can see bullet holes in buildings from the 1948 War of Independence.

At the top of the main street is the Davidka monument — a testament to the creative military prowess of the Israel Defense Forces. The Davidka is a cannon whose sole purpose was to generate enough noise to scare off enemies. It was quite effective. 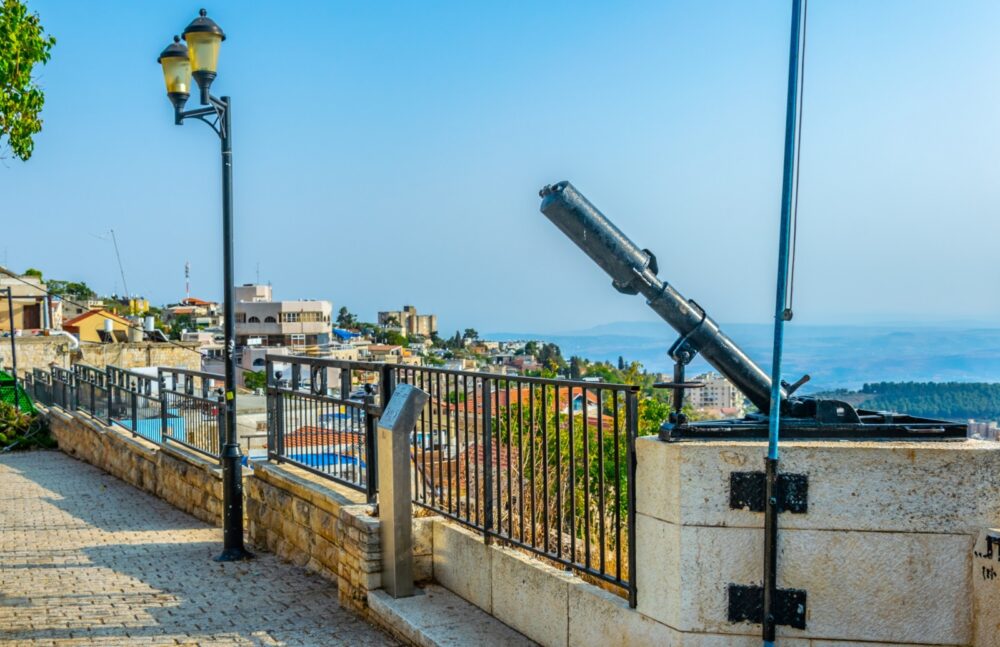 Davidka monument in Tzfat (Safed). Photo by Trabanto via Shutterstock.com

Up along the Great Stairs of Tzfat is the acclaimed Citadel — a fortress that once served to capture an advantageous viewpoint of Israel’s enemies, but now offers an astounding view of the Golan Heights.

I typically find comfort looking out into the Golan Heights; its enduring presence adds to the theme of tradition and continuity in Tzfat.

Even my aunt’s apartment was passed down — it belonged to my grandparents and will forever be an heirloom in my family.

My aunt calls me over for couscous. It’s Friday — my Safta cooked couscous every Friday, so we keep her tradition alive.

I never got to meet my Safta, but I think she would be proud of all that’s changed — as well as all that’s stayed the same — for our family in Tzfat.

Oreen Cohen is from Fort Lauderdale, Florida. She is on a gap semester in Israel and will be starting college at Tulane University in the spring of 2022. She is interning for ISRAEL21c through the Aardvark Israel program.