Descendants of centuries-old Jewish community in China’s Kaifeng rediscover Jewish heritage after near complete assimilation in their local community.

In Chinese terms, the city of Kaifeng, about 500 miles southwest of Beijing, is reminiscent of the Israeli city of Hadera: The number of its residents is 700,000 – as opposed to Beijing’s 15 million or Shanghai’s 20 million – and it doesn’t even have its own airport.

However, a thousand years ago, Kaifeng was the capital of the Chinese empire, the largest, richest and most advanced in the world at the time, with 600,000 residents that made it the most populated city on earth.

Ancient Kaifeng had a Jewish community – a small but thriving one, whose story is unique in the history of the Jewish people. For the 800 years of its existence, Kaifeng’s Jews never suffered from persecution or discrimination. The Chinese authorities, as well as the general population, welcomed their Jewish neighbors, viewed them as citizens in every respect and allowed them to observe their religion with complete freedom.

In spite, or perhaps because of these freedoms, the community dwindled until about 150 years ago, when the assimilation and integration proved complete. It is only in the past 20 years that the descendents of Kaifeng Jewry, who now number about 1,000 people, have rediscovered their Jewish tradition. Some of them have considered undergoing proper conversion and making aliyah, and a few of them have done so already.

Thirty-year-old Shi Lei does not try to hide his excitement when he takes his guest, an Israeli journalist, to the central room in his parents’ home. His family, which is of Jewish descent, has lived in this home for more than 100 years. After the death of his grandmother and grandfather, Shi, together with his father, turned this room into a mini-museum and a small Jewish center, where he gives classes on Jewish tradition to children and adults of Jewish descent.

Shi Lei, who graduated with a degree in English from the University of Kaifeng, spent close to three years in Israel studying at Jerusalem’s Machon Meir and at Bar-Ilan University: “I was the first person from Kaifeng that studied in Israel. I decided to return to Kaifeng and to develop my mini-museum, because if I would leave here then there would be no one to teach the younger generation. We feel connected to the Jewish people and to the State of Israel.”

It is not clear when exactly the first Jews came to China or when the Jewish community in Kaifeng was formed. In the prophecy of the redemption in the book of Isaiah it states: “See, they will come from afar – some from the north, some from the west, some from the region of Sinim (Chinese)” (Isaiah, 49:12); but biblical scholars agree that the verse does not speak of China per se. Some claim that the Jews of Kaifeng are descendents of the Ten Lost Tribes. Others theorize that they came to China in the second century following the downfall of the Jews in the Bar Kokhva revolt (132-135CE).

Most of the researchers, as well as the Kaifeng descendents themselves, tend to suggest that the original Jews in China were merchants from Persia that came by way of the Silk Route (in today’s southern Turkey) to the city of Xian in central China.

Historical references and archaeological findings have proven that the Persian Jews first arrive in China in the eighth century; and since the long, arduous journey made family life difficult, the solution was to establish a permanent base in China. The location of choice was Kaifeng – China’s capital from 927BCE to 1127CE.

A stone tablet dating back to the 1489 Kaifeng synagogue – which is now in the city museum – in inscribed with the following: “According to the commandment of their god, the Jews came from Tian-Sho (Chinese for both “India” and “every state to the west of China”) with woven materials from the west in their hands, meant as a gift for the emperor.”

The last emperor, according to the tablet, said “welcome to our country; dwell here and keep the customs of your ancestors”.

The emperor’s warm welcome provided them with automatic Chinese citizenship, not a trifle feat at a time the Jewish communities in Europe and the Muslim countries were suffering persecution. It is believed that one of the reasons for this show of tolerance was that the Chinese of the time did not have a “religion” in the sense of any of the three monotheistic faiths: The common practices of faith based on the teachings of Chinese philosopher Confucius, were an array of ethical and behavioral codes more than the belief of religious ordinances commanded by a higher power. 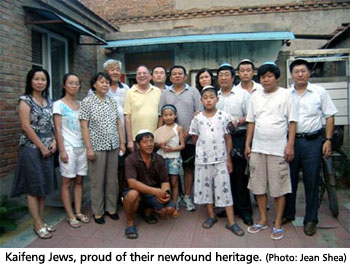 Kaifeng’s Jews found it easy to adhere to Confucianism since it doesn’t require the recognition of a new Messiah or prophet and there was no need to give up on the rules of keeping kosher or observing the holidays.

The ancient stone tablet also states that one of the emperors from the Ming Dynasty (1368-1644) bestowed “the gift of incense” upon the Jewish community. It was given to the Jewish doctor Yung-Ching who appears to have been his personal physician. This indicates that Kaifeng’s Jews used Chinese names rather than Hebrew names, and incorporated a Chinese ceremony into their religious rituals – the lighting of incense.

At its peak, the community numbered no more than 6,000 people.

Kaifeng’s Jews were away from any Jewish center, as they had no contact to other Jewish communities around the world. At its peak, the community numbered no more than 6,000 people. There was no yeshiva and the young Jewish men that were interested in academic studies naturally attended the local institutions, which cultivated knowledge of Chinese literature and tradition. Given the circumstances, the chances of the small, isolated Jewish community to maintain its unique features in the hub of China were remote.

According to researchers, another key to the demise of the Kaifeng community lies in the fact that China was the first to allow all its residents to join the top rank of government officials – the Mandarins – by taking qualification exams.

Most of the Jews in Kaifeng were proficient in Chinese and some also in Hebrew, which gave them an advantage over most of the residents in the empire; and so the number of Jewish descendents that applied for the Beijing positions was substantially higher than their actual representation in the population.

After five years of study in the emperor’s courtyard, they were sent to various regions in the vast empire. If they hadn’t married during their years as students, they were certainly interested in doing so when they began their government service, and as Mandarins, whose careers were mapped out they were considered eligible bachelors. Excluding Kaifeng, however, there were no eligible Jewish brides to be found in China, prompting the assimilation further.

According to the information available, the Jewish community life in Kaifeng came to a virtual halt about 150 years ago. The community synagogue existed for almost 700 years, until 1854, when Kaifeng was flooded by the Huang He – the Yellow River. It was never rebuilt.

Although Kaifeng’s Jews had already completely assimilated, their descendants continued to observe several customs, like keeping kosher and keeping Shabbat. Many continue to live the old city in the old section, and the Jewish names of two of the neighborhood’s streets still appear in Hebrew and English. The community is now slated for an evacuation-renovation project, like many of its Chinese counterparts.

When Mao Zedong took over China in 1949, his regime faced several dilemmas pertaining to national minorities, as 20% of China was not dominated by the Han – the largest national group. In 1953 the new regime decided to recognize 55 national minorities but the Youtai – the Jews – were not one of them. Mao was rumored to have made the decision personally.

By that time, the majority of Jews living in Harbin and Shanghai had already left China and the move was undoubtedly prompted by this decision; but the scholars believe that the decision had nothing to do with anti-Semitism since China has never, to this day, demonstrated any signs of anti-Semitism.

Jews enjoy a very positive image in China. The decision not to recognize them is believed to have stemmed from sheer math – they community was simply too small – a few hundred in a country of a billion people.

In the 1980’s, as China started moving toward a free-market economy and opened up to the West, Jews from Canada and the US came to Kaifeng and met with the old community’s descendants in the city. These visits strengthened the Jewish awareness of the descendants.

In the last several years, Shavei Israel has been the main Jewish organization that has been actively involved with the Kaifeng’s Jewish descendants. Michael Freund, an American Jew who made aliyah 13 years ago and now heads Shavei Israel, said, “Since establishing contact with the Jews of Kaifeng, we have translated numerous books and articles for them, and have provided them with basic materials on Judaism and on Israel. Even more importantly, we have already assisted 10 young adults from the community to make aliyah and get settled here in the country”.

While many of the descendants are interested in a much more intensive connection with Jewish tradition, only a small group is interested in immigrating to Israel and converting.

The Chinese authorities have yet to voice any objection to Shavei Israel’s activities in Kaifeng. Freund sees that as a sign: “If some of Kaifeng’s Jews decide to reclaim their Jewish heritage – as I believe they will – it would make for some very important and historical closure.”

This article originally appeared on ynetnews.com