What’s going to be hot, disruptive and actionable in the coming year? The answers were revealed at OurCrowd’s Global Investor Summit in Jerusalem.

What will be the hottest technology trends in the coming year? Some 10,000 live and online guests from over 90 countries got a look into that crystal ball at the OurCrowd Global Investor Summit February 1 in Jerusalem, world headquarters of the OurCrowd global equity crowdfunding platform for accredited investors.

The much anticipated Tech Trends plenary session of the biggest equity crowdfunding event in the world was not pure guesswork. The trends were identified based on a survey of OurCrowd’s partners, VCs, multinationals and CEOs, explained Stav Erez, partner and executive vice president for business development for OurCrowd Innovation Labs.

“Construction is one of the major sectors in the world economy, but it is also one of the least efficient and least digitized,” said co-plenary leader Eli Nir, senior investment partner at OurCrowd.

“It is estimated that with the digitization of this sector we can lower costs by a staggering 45 percent and help heal the long delays and project budget overruns that are so common in this space.”

Israel is positioning itself to be a force in this arena. Last May, the Construction Innovation Zone  – the world’s first construction-tech hub – was launched in Tel Aviv by the Israel Builders Association, SOSA global startup ecosystem platform, the Israeli Construction and Housing Ministry and the Israeli Economy Ministry. 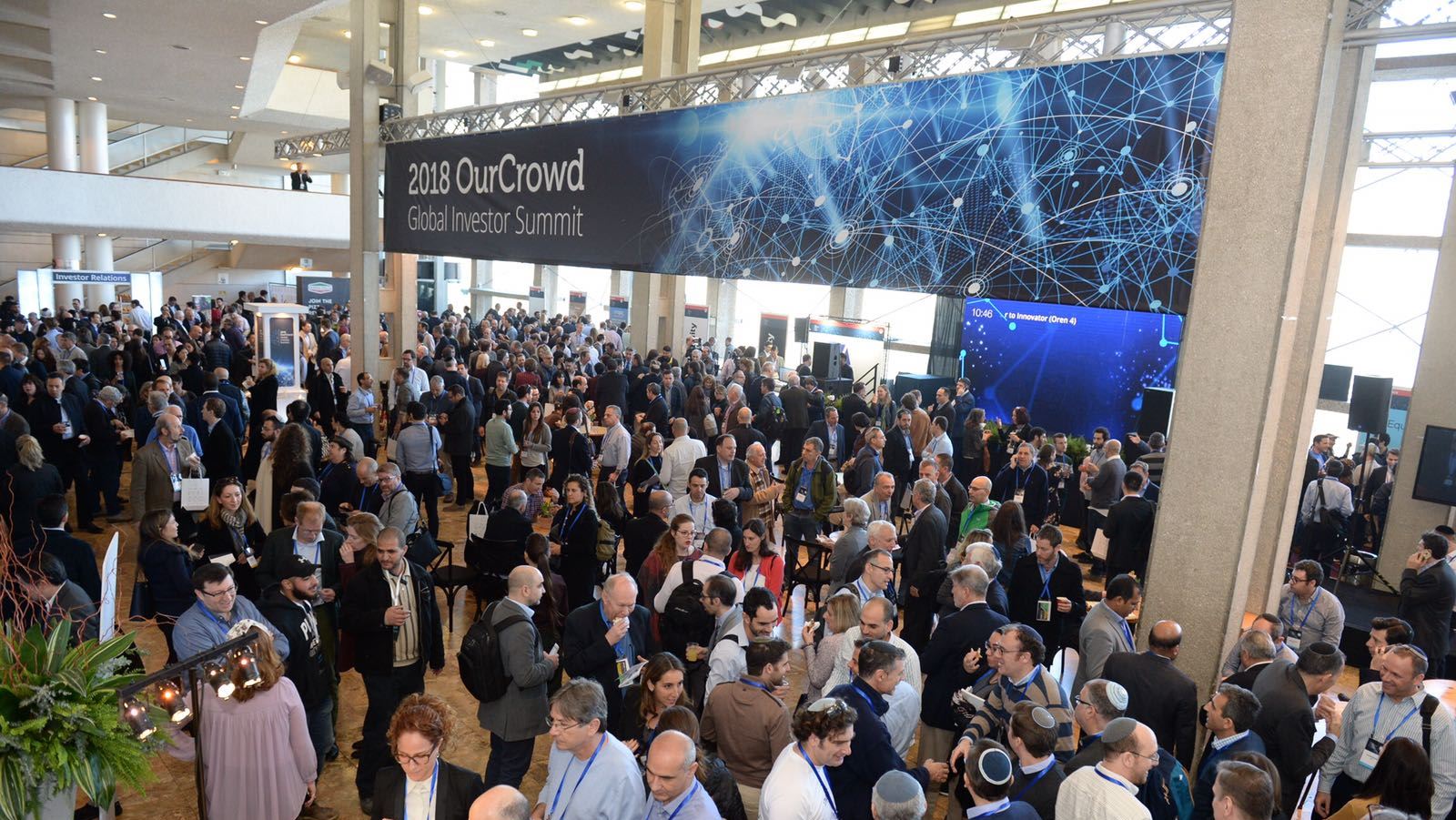 Quantum computers, supercomputers being developed by the world’s largest countries and multinationals to solve complex problems beyond the capabilities of classic computers, can crack most types of encryption. As these computers get closer to reality, there is a desperate need for a whole new level of cybersecurity.

The market cap for quantum encryption is expected to grow in the next five years to at least 5% of the encryption market, which is estimated at $435.8 billion.

An example of an early-stage Israeli startup tackling this field is QuantLR.

“It is estimated that by 2030, 15% of cars will be fully autonomous and another 60% will have a high degree of automated driver assistance systems,” said Nir. “Leading this revolution are many Israeli companies and startups.”

Driven by shared mobility, connectivity services, and feature upgrades, new business models could expand automotive revenue pools by about 30%, adding up to $1.5 trillion.

Automation is predicted to eliminate 6% of the jobs in the United States over the next five years – and not just low-wage factory workers but also highly skilled, knowledge-based employees. A study by the University of Oxford predicts that accountants, for instance, have a 95% chance of becoming obsolete, while Deloitte estimates that 39% of jobs in the legal sector could be automated in the near future.

Even developers are not immune to this trend, as AI-based software is starting to emerge for doing software testing, debugging and even frontend development.

However, many types of AI solutions can enhance existing jobs rather than doing away with them.

The Israeli startup Sense Education claims to be the world’s first AI solution that helps instructors provide personalized educational feedback to massive amounts of open-ended assignments – not to replace human educators but to enable them to evaluate thousands of students’ submissions to provide each one with detailed feedback.

Many of us are still struggling to grasp the basics of blockchain and yet we can see it coming fast down the pike. However, scalability is the major problem holding back the coming cryptocurrency revolution. Right now, only a few crypto-coin transactions can be completed per second, compared with thousands per second via credit card.

“Numerous companies around the world and at least one Israeli company, DAGlabs, are developing technology to help correct this scale issue,” said Nir. “Once they do, we may see the rise of a crypto-dollar currency.”

DAGlabs plans to launch its initial test net in the third quarter of 2018 and launch a novel cryptocurrency by the end of the year.

The worldwide plant-based meat substitute and “clean meat” markets are set to reach $14.22 billion by 2022 and gobble up a market share of 33% by 2050. “Clean meat” is not a meat substitute but actual meat produced in bioreactors from living animal cells.

This will have huge indirect economic and environmental effects on the world. Currently, livestock systems occupy 45% of the Earth’s surface area and are responsible for at least half of annual worldwide greenhouse gas emissions; 4,000 liters of water are required to produce one kilogram of meat; and the total water footprint of animal production constitutes 29% of the water footprint of total agricultural production.

Israeli startups such as SuperMeat and organizations such as the Modern Agriculture Foundation are taking a leading role in this food-engineering revolution.

“In the next years, we will be able to eat meat that was grown in the lab without the environmental and economic effects,” said Erez.

Data privacy is becoming ever more regulated by governments. “We see, for example, in the European Union new regulation that would fine organizations that violate our privacy €20 million,” said Nir. “And this is only one aspect of the need for organizations to better control and protect one of their most valuable resources – their data.”

An example of an Israeli startup working on a solution for data privacy is Cognigo, formerly D.Day Labs, whose technology will automatically search, classify and manage organizational data while at the same time provide compliance with data privacy regulations.

The concept that not every medication works the same for every patient is not new, but today’s advances in technology are finally putting the personalized medicine concept into practice, enabling customized treatment, monitoring and analysis.

BusinessWire estimates that the global personalized medicine market will reach approximately $233.4 billion by 2025.

There are many Israeli companies in this space. The example cited by Erez is Quanabis, which is analyzing myriad forms of medical-grade cannabis to determine their exact components and use in precision medicine.

By 2050, the number of people in the world aged 50-plus is projected at 3.2 billion. A big chunk of this population are the post-World War II babies now reaching retirement age in the United States, and 90% of them say they will demand to live in their own home as they age. That can only be accomplished through massive implementation of smart-home technologies that support convenience, security and assistance.

Aging-tech is a big and growing sector in the Israeli startup ecosystem and in academia. Israel’s first Innovation Lab for Healthy Aging recently opened at Ben-Gurion University of the Negev. An aging-tech investment vehicle, Mediterranean Towers Ventures, launched in Israel last July.

Aging-tech includes everything from smart new sensors to noninvasively monitor movement, hygiene, sleep and nutrition as well as changes in habits, to personal assistant robots like the ElliQ “active aging companion”by Intuition Robotics. The key to all these technologies is providing monitoring and optional alerts without compromising privacy.

Despite the prevalence of Internet and mobile shopping, most retail sales still take place offline. But if brick-and-mortar stores are to remain viable and competitive, they have to incorporate elements of ecommerce.

Some of these elements will be smart sizing technologies in the fitting room, digital advisers rather than commissioned salespeople, in-store push notifications tailored to each shopper, and swift automatic payment options to banish long lines at the cashier.

Retail-tech for how we try, buy and sell fashion is a booming business in Israel. The Re:Tech ecommerce innovation hub in Tel Aviv works with about 150 startups in retail technology.