13 of the best steakhouses and barbecue joints in Israel

Ready to sink your teeth into a truly spectacular piece of meat? The indescribable goodness of lusciously tender, smoked and flavorfully charred barbecue, or of a properly smoked high-quality aged steak, is well appreciated by Israelis.

Here are the really good places to get that quality of meat, run with care by cattle ranchers, grill masters and chefs who know the tricks of the trade, and who pride themselves on taking carnivorism to another level. Vegetables be damned, today you can dine like kings in these 13 meat-centric establishments.

Don’t let this restaurant’s gas-station location put you off. The American-style southern barbecue joint is less than a year old, yet already blowing the socks off American barbecue enthusiasts and native Israelis alike.

Chef Ohad Leizer’s menu puts an emphasis on smoked meats, which are treated with house-made specialty dry rubs and delicious top -secret marinades before being smoked in a special smoker brought in from the US. Ready meats are then served up as sandwiches, or on platters, alongside the requisite coleslaw and other simple accompaniments such as baked potatoes, crispy fries and homemade pickles.

In case brisket is not your absolute fave, you can bet that the beef ribs in pineapple barbecue sauce are going to be a home run. Vegetarians can take refuge in the smoked tofu and mushroom salad (or the sandwich version, which comes dripping with two kinds of homemade aioli sauce), which will more than make up for the otherwise meat-loving atmosphere. 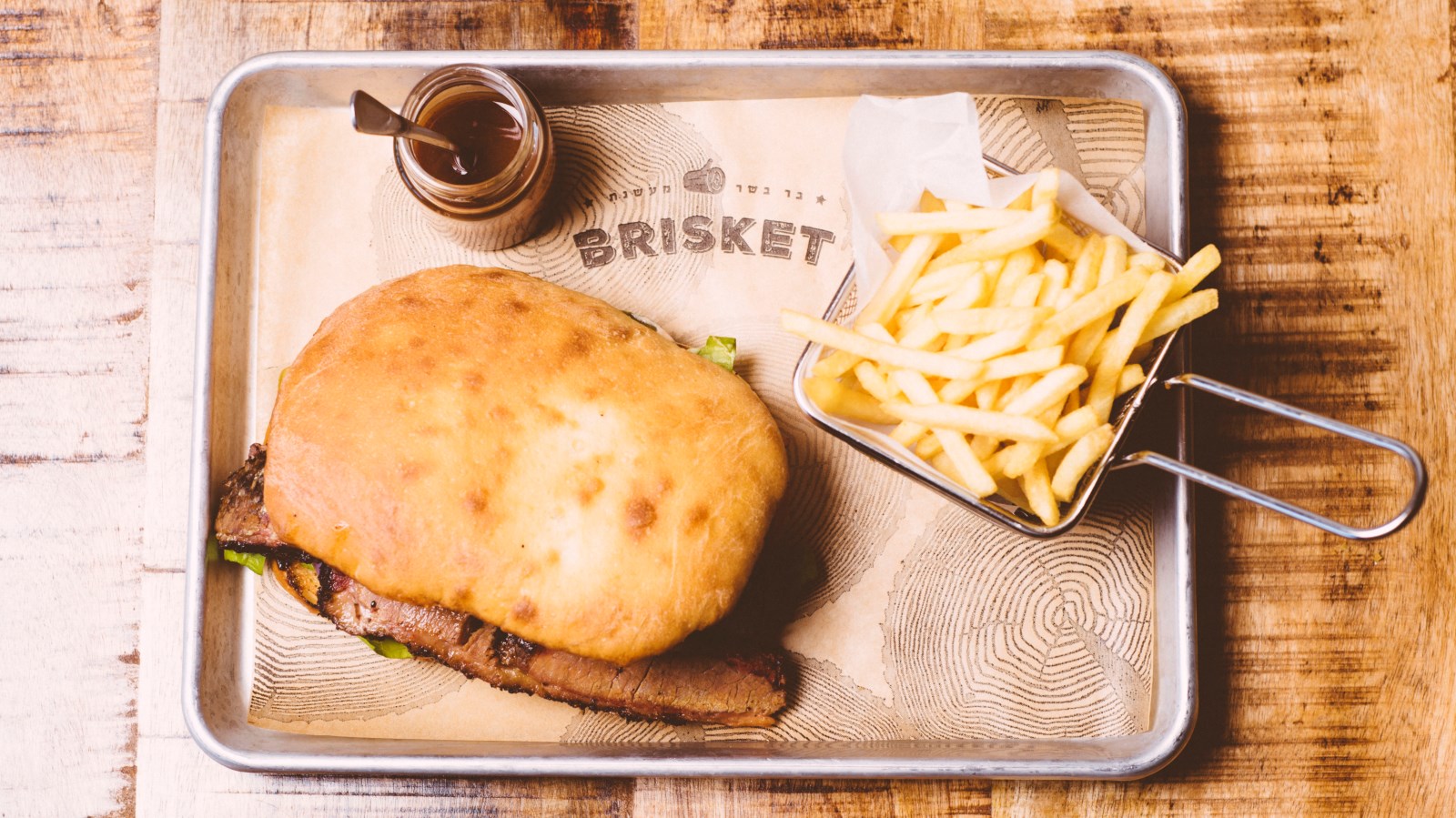 Try the signature “Bronte Plate” comprised of artisanal chorizo, sirloin steak and entrecote skewers, paired with oven-roasted and grilled root veggies, crostini and cornichon pickle. Other enticing dishes to try include the “Smokey Burger,” served with crispy fried onions, lettuce, tomato, pickles, mustard and garlic aioli; and the smoked meat sandwich made from pulled beef and served on a fresh bun. For dessert, it’s gotta be classic pavlova, a confection of meringue, vegan cream and fresh fruit. 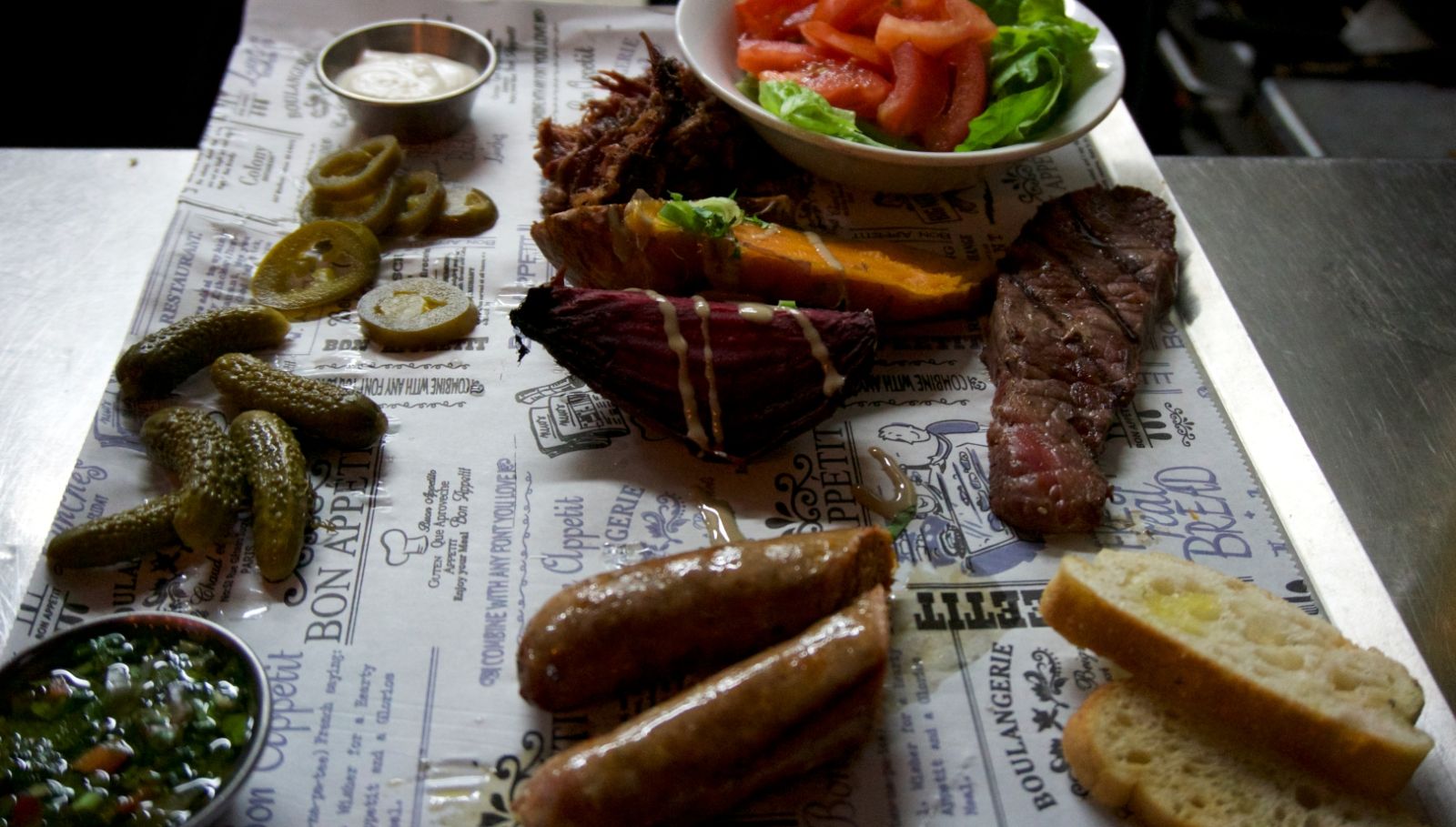 This barbecue joint opened in December 2017 has already become an online sensation with Jerusalemites flocking to Facebook foodie groups such as “Restaurant Club Jerusalem” to give rave reviews. Harvey Sandler, chef of the revered upscale kosher restaurant Gabriel, which he has since replaced with this more inclusive and affordable smokehouse, is of Canadian origin but isn’t afraid to show off his extensive barbecue skills representing the American South.

Passing muster with connoisseurs of this classic barbecue culture, various cuts of excellent-quality meat are listed by weight on the menu, including oak- and hickory-smoked brisket, hickory-smoked pulled beef shoulder, and maple and mesquite chorizo.

Sides include expertly fried sweet potato chips, onion rings, coleslaw and various dipping sauces that round out the finger-licking appetizers and mains. Also available are complete dishes such as the pulled-beef tacos, which come with a spicy salsa and a side of guacamole, and handcrafted sandwiches on frena bread, such as the chicken club served with chipotle mayo and cherrywood-smoked lamb bacon.

Quite an unusual find in an unusual location, Alabama draws inspiration from the historical meat smoking of America’s deep South, as well as the Argentinian art of asado.

This no-frills meat destination serves a selection of meats, including beef rump steak and smoked pork neck, cooked in a charcoal oven. Meats are served alongside a minimal selection of sides such as whole fire-roasted potatoes and the same cowboy beans one might find around a gaucho’s campfire.

The Elvis Presley line proudly displayed on the restaurant’s website — “A place where the beer is cold, the ribs are juicy, and the atmosphere is hot” — is not entirely accurate, considering its bring-your-own drinks policy. Another unusual quirk is the cash-only rule, so make sure you bring enough dough before digging into your succulent meal.

Using a traveling wood smoker imported from Missouri, this food truck run by Tishbi wine heir Golan Tishbi makes its appearance at the winery each Friday from 8am-3pm. From the truck, Tishbi serves up the week’s portion of hickory-smoked brisket, ribs and poultry. A weekly food destination in and of itself, on the backdrop of one of the country’s most historic wineries, this place could have made the Baron Rothschild himself into a very happy carnivore.

Long before this unique Ayalon Valley brewery and restaurant existed, owner Nir Bishi was nurturing dual passions for smoking meats and home-brewing beer. Putting the two elements together for more than just friends and family was a no-brainer for the Modi’in area resident, and the now-thriving brewpub was born.

Known for its all-you-can-eat deal, Bishiq has fixed menus that include 8 to 11 portions of house-smoked meats, countless Israeli-style salads, sides, dips and four local beers brewed onsite, as well as a rich parve dessert — all the elements of a surefire good night.

Created by Rami Ginat and Amir Talmor, real Israeli cattle ranchers from the Jezreel Valley, Limousine was born out of their butcher shop by the same name, established in 1998. Together they aspired to produce the highest quality local aged beef from the process of cattle-raising up through the butchering and aging of the meat.

In 2002, the family-style restaurant was opened, and has been known for its hospitality, upscale dining and high-quality meats ever since. Meats of different cuts are sold in grams and prepared over a charcoal grill, while comprehensive starters such as grilled skirt steak with a chimichurri salsa, and caramelized chicken liver pate with chili and cherry tomato jam, whet the appetite for the feast to come.

Simply called “The Place for Meat” in Hebrew, Makom Shel Basar in Tel Aviv’s swanky Neve Tzedek neighborhood is an upscale meat lover’s paradise. Situated in a refurbished historical building in the artists’ quarter, the restaurant includes its own meat-aging room and steel wine refrigerator.

Serving only the classics of the American steakhouse cuisine, here you can find iceberg salad with creamy blue cheese dressing, and creamed spinach to go with your prime rib or Porterhouse steak, which has been carefully selected by co-owner and chef Nini Noff.

For dessert, try their signature homemade crepes with a refreshing strawberry sauce, vanilla ice cream and a dusting of powdered sugar. 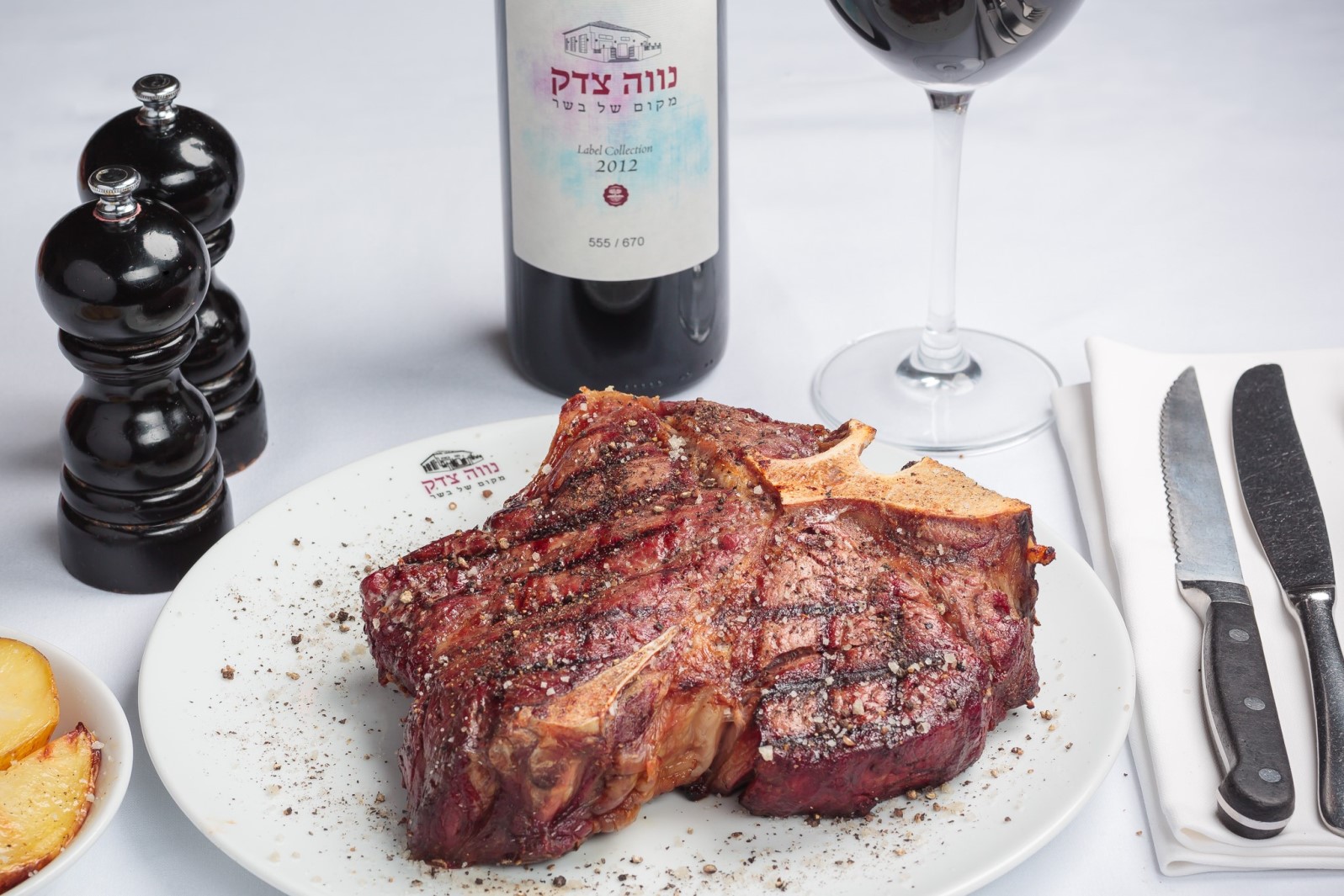 The Gillis family has been raising cattle on the family ranch for over 40 years. For the past 30 years they have been selling prime beef cuts from their butcher shop (they deliver nationwide), and have been curating meals and events in their restaurant, Gillis Steakhouse, for the last decade.

The family hosts pre-arranged private events, kosher meat workshops and group dinners during the week, but welcomes the general public (by reservation only) on Thursdays from noon to night; call 04-676-3555.

Serving hefty portions in the manner of a classic steakhouse, the signature dining experience is a tasting meal comprised of six or more dishes including chickpeas with slow-roasted beef; roasted eggplant with onion, tahini and pomegranates; a juicy burger; sirloin roll in chimichurri sauce; and portions of ribeye steak and fillet mignon served with assorted salads and drinks, including the fine wines and craft beers of the Golan.

This award-winning modern American-style meat restaurant handles its products with the utmost care, and it shows. Taste its selection of dry-aged steaks from Israeli-raised cattle, or enjoy American classics such as an elevated Philly cheesesteak with Gouda cheese and fried chili onions.

Looking to sample something different? Try one of the more refined appetizers such as the “New York Sirloin Windows” with Japanese caramel sauce before tucking into an astonishingly large T-bone steak.

An American-style steakhouse complete with appetizers that represent different American states, Ranch House is a little getaway in the hot Israeli southern city of Eilat on the Red Sea.

Ranch House is the place to quell your homesickness, if only for a moment, with dishes such as “Chicago” (mushrooms sautéed in garlic oil with fresh herbs and caramelized shallots), beef spareribs marinated in spiced beer or simply a nice ribeye steak on the bone. And don’t forget to end with its famous rich chocolate soufflé for dessert.

Located at the end of the previously not very tourist-friendly butchers’ alley in Shuk HaCarmel — the main open air market in Tel Aviv — this restaurant born out of the nearby modern Meat Market butcher shop is a surprisingly barebones casual location to get a perfectly cooked piece of fine meat in the city.

Opened by Chef Yaron Kastenbaum, it might be the only place in the city to get a refined smoked shawarma. Here you are encouraged to choose your cut of meat from labeled trays of the raw goods.

Looking for the same great dining experience without having to walk through back alleys? Try the newer self-serve branch near Tel Aviv University, which serves local craft beers alongside perfectly spiced lamb kebabs and arayes —grilled pita sandwiches stuffed with ground lamb. 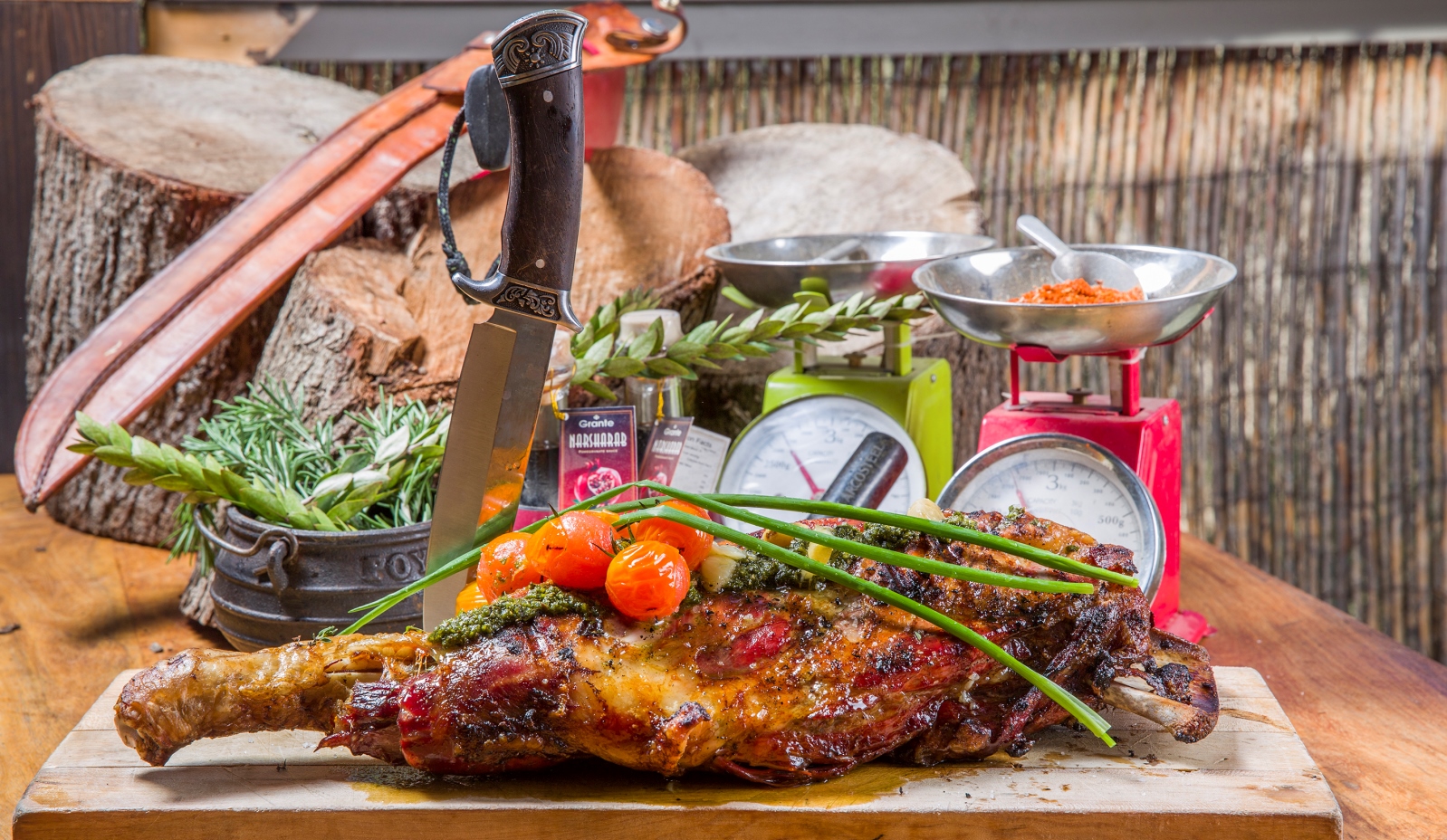 Located northeast of Jerusalem on the way to the Dead Sea is a gourmet oasis that embraces the natural beauty of the surrounding desert. This chef restaurant offers such mouthwatering dishes as veal rib served on the bone with date miso sauce, potato and sweet potato from the bonfire; and duck breast in cabernet sauce served with wild rice, root vegetables, nuts and cranberries, for the non-red meat eating diner. This fine restaurant is known for its smoked meats and hearty, filling portions straight from the wood-fired oven.  ( Israel21c)