10 best places to go diving in and around Israel

Archaeological and historical wonders also await under the tepid waters, as well as animal species you might not associate with the Middle East.

You’d think that summer would be a great time to take the plunge and explore Israel’s seas from beneath the surface. But the Mediterranean and the Red Sea visibility is actually best in Israel’s cooler months when the waters are crystal clear and sea life is in full view.

Israel has a diving culture that may surprise you because it’s not just about Eilat’s beautiful reef.

Archaeological and historical wonders also await under the tepid waters, as well as animal species you might not associate with the Middle East–dolphins, octopi, sea urchins and even a few sea turtles, whose numbers have increased thanks to such organizations as the Israeli Sea Turtle Rescue Center.

What’s more, many of Israel’s diving sites can be accessed directly from the beachfront. So grab your gear and get diving in Israel.

Neptune’s Tables, accessible from the beachfront at Isrotel Princess Hotel in Eilat, is one of the area’s deepest dives, with average depths of 15-25 meters.

Along the Red Sea’s sandy bottom, you can view garden eels, blue-spotted stingrays, colorful nudibranchs and an unusually large number of starfish early in the morning hours, making this a truly worthwhile dive. 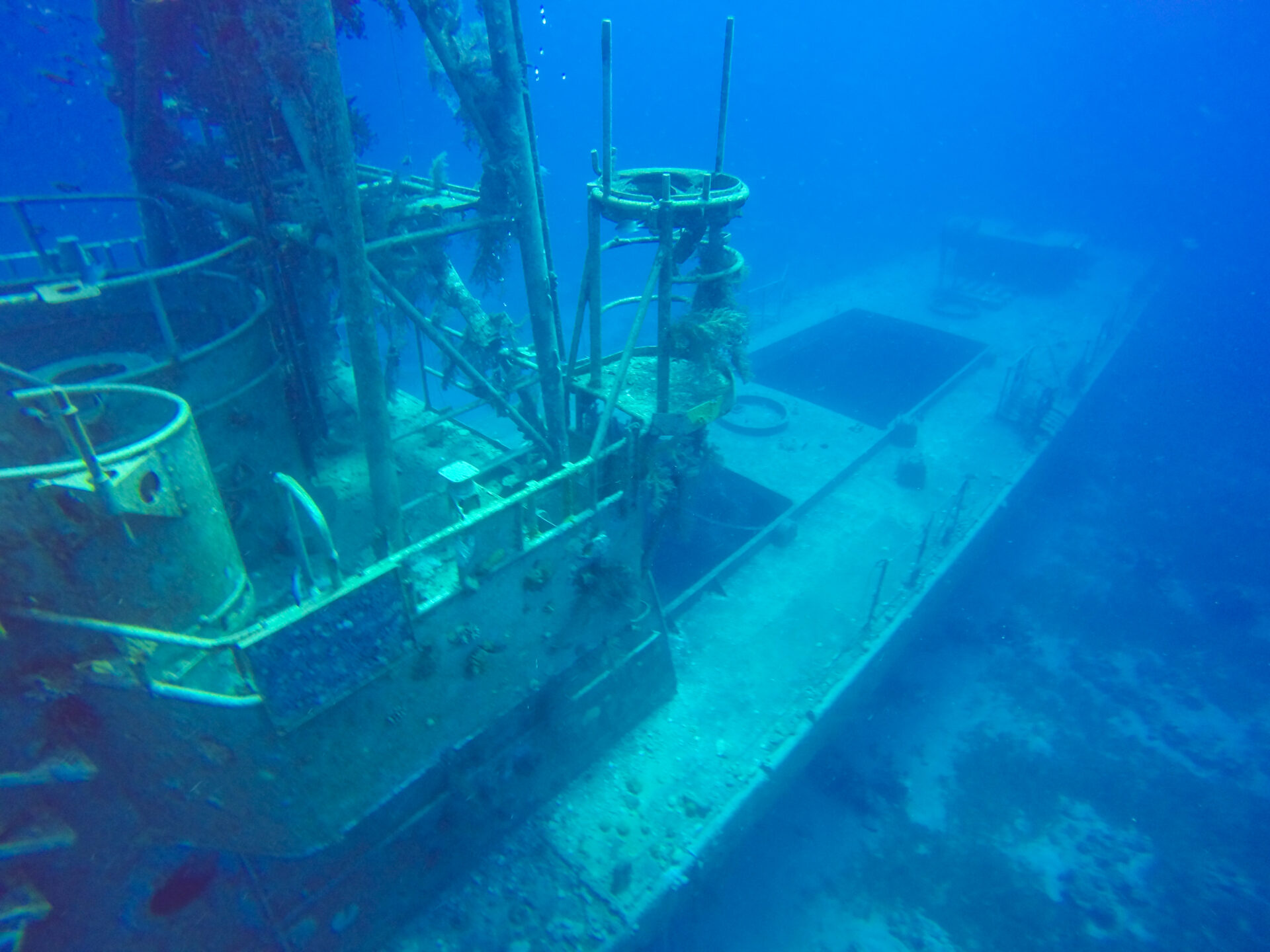 A shipwreck off the coast of Eilat. Photo via Shutterstock.com

Attracting constant groups of sharks in the chillier months of November to April, the shallow diving site surrounding the Hadera electrical power plant is whimsically dubbed the “stream of sharks.”

The plant’s activity keeps the waters warmer than in other places along the Mediterranean coast, making it attractive to certain shark species, and in turn to the humans intrigued by these fascinating creatures.

Easily accessible by the beachfront at Nahal Hadera Park, the site has so-so visibility. A guided run is your best chance to hang out as safely as possible with many of the friendly 2- to 3-meter sandbar sharks and dusky sharks that congregate there. Diving clubs like Out of the Blu, which also takes divers on Red, Med, and Dead Sea “diving tours,” are experts in guiding this particular shark-based experience.

Once the provincial capital of Roman Judea, Caesarea and its ancient deep-water port are filled with beautifully reconstructed ruins, including the famous colosseum and aqueduct.

The city’s Underwater Archaeological Parklets divers view the site from an entirely different perspective. Four different tracks and underwater experiences explore the original pillars, structures, giant anchoring rocks, and other bits and pieces of the lost empire lying beneath the surface.

Although the super-salty Dead Sea is probably the last place divers would think to take the plunge, this lake houses a fascinating microcosm of salt rock formations and other weird and otherworldly scenes that most people will never get to witness up close.

Because this is a more complicated dive due to ultra-strong buoyance and limited public access, we suggest contacting the local Dead Sea Divers experts to help you with this one.

A 4-kilometer site between the well preserved Satil shipwreck and the border of Egypt, this diving site is known for its colorful displays of corals.

The possibilities range from a 4- to 6-meter-deep solid coral reef at the shallow end of the site, to a large sand stripe with coral-covered rock formations and a gathering of red lionfish and sea goldies, to the famous Moses rock — a coral formation extending eight meters below the water’s surface. 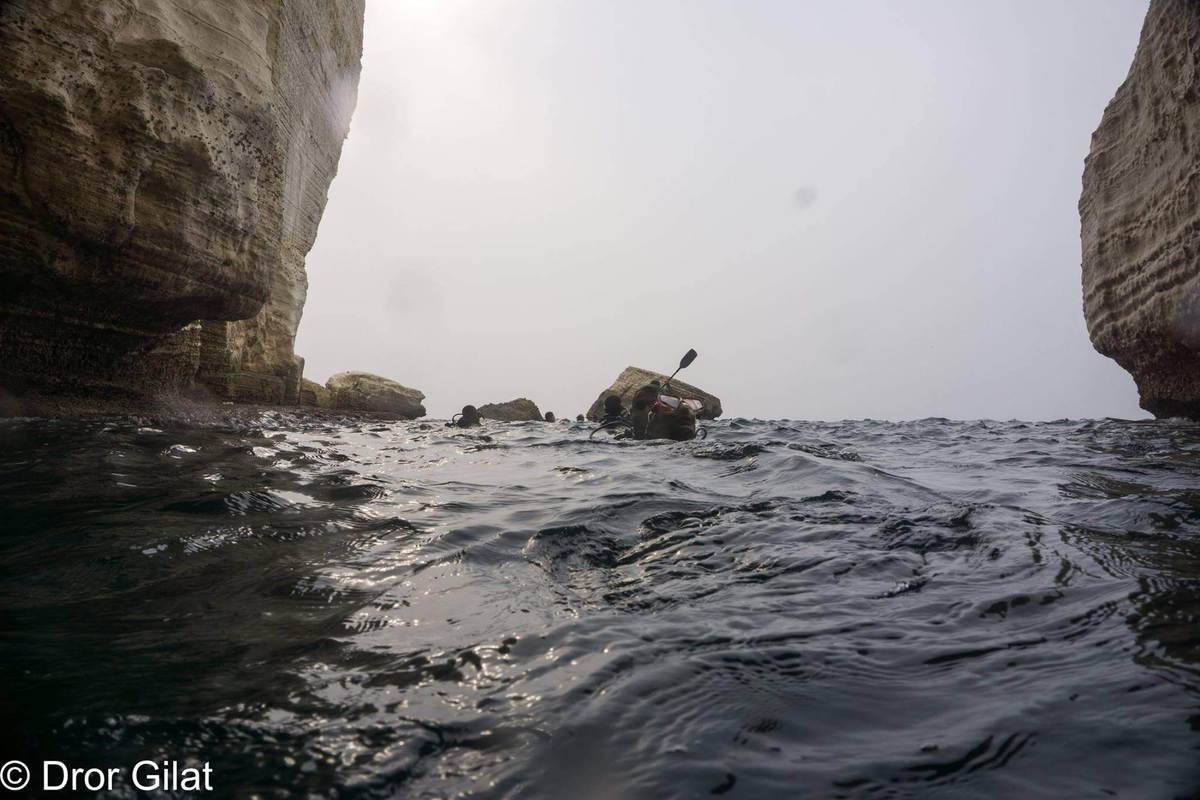 The caverns at Rosh Hanikra. Photo by Dror Gilat

Inside the waters of beautiful Rosh Hanikra National Park along the Lebanese border lies one of Israel’s most unusual and popular Mediterranean diving sites.

Made of naturally formed sea caves and caverns flooded with turquoise waters, it is accessible by boat or from the beachfront. Though the site is mostly about exploring the natural topography, divers have been known to come across the occasional dolphin, seal and sea turtle along their journey.

Another site in this area is Achziv Canyon, an underwater rift between Rosh Hanikra National Park and Achziv National Park in Nahariya. The site, ranging from 10 to 30 meters in depth, gives a wonderfully diverse look at Israel’s marine life, including corals, crabs, octopi, sea turtles and sea urchins.

A World War II-era Italian submarine that was tragically sunk by a British torpedo in 1942, the Scire sits 33 meters beneath the Mediterranean waters at Haifa Bay.

Stumbled upon by chance during archaeological excavators in the mid-1980s, the site, which now functions as a memorial, is a way to explore a bit of history while also observing small species of Mediterranean marine life. 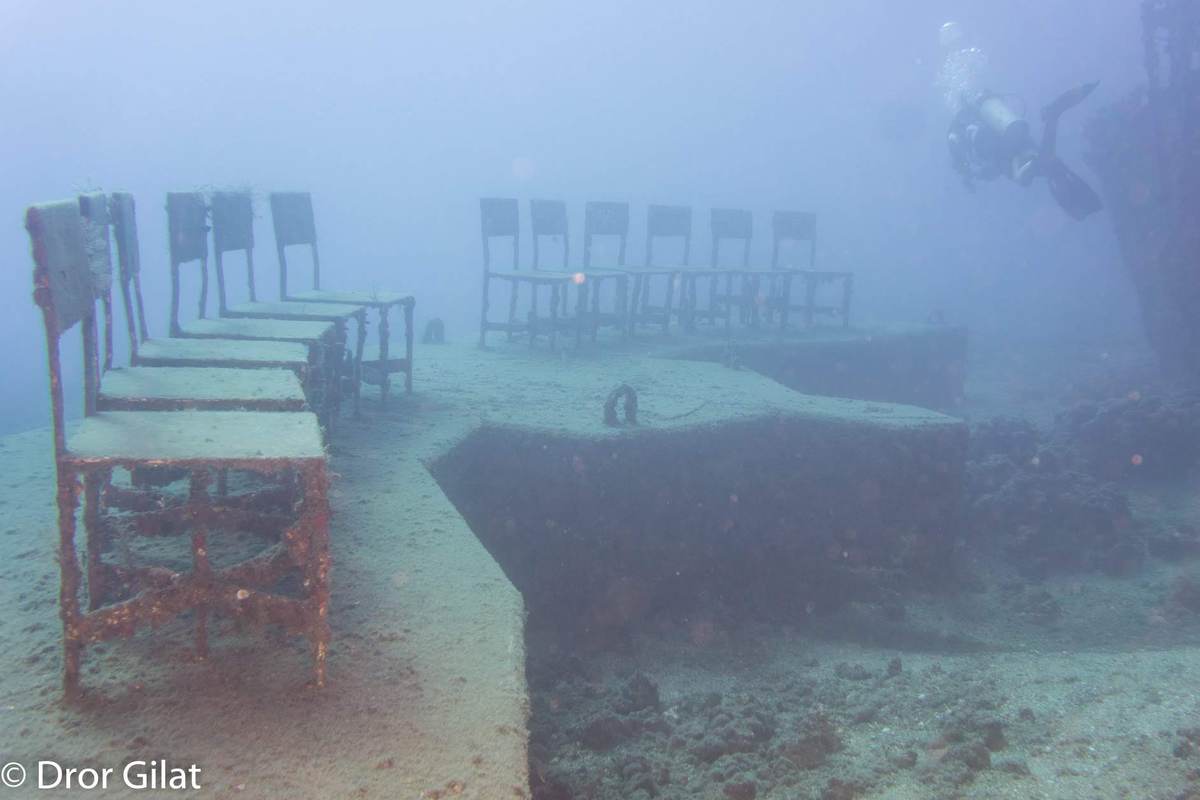 The underwater memorial for 12 Israeli navy seals at the Kidon shipwreck. Photo by Dror Gilat

Three kilometers off the Nahariya shoreline at southern Shavei Zion beach, the shipwrecked Kidon battleship was initially placed here as a diving attraction. In recent years it has come to serve as an underwater memorial for 12 Israeli navy seals who perished in a 1997 ambush by Hezbollah forces.

The tribute to the soldiers, placed there by 100 divers back in 2016, consists of structures in the shape of two batwings upon which sit 12 chairs. The names of the fallen soldiers are engraved on a separate concrete block.

Many seasoned divers eschew Eilat in favor of Sinai to the south. An area under the sovereign rule of Egypt, known to harbor illicit terrorist groups, is not the safest place to travel these days. But it does offer a more untouched Red Sea coral reef experience than that of the more touristy Eilat.

Check out Facebook groups like Sinai Love for diving recommendations, and reviews of the Israeli companies that can take you there.

Okay, this site isn’t open to divers – or not just yet. But we sure hope it will be soon.

The site of a massive fishing settlement that sunk into the ocean some 9,000 years ago off the shores of Atlit, it is a goldmine of archaeological findings including everything from ancient olive oil presses to human remains and is both a direct window into the past and a future warning regarding the dangers of rising sea levels.