It was eerily reminiscent of the route that Jews-turned-pirates fleeing Spain and Portugal in the 17th century would take. Making their way across the North Atlantic, these legendary swashbuckling Jewish pirates once roamed the Caribbean from Curaçao to Jamaica. In ships bearing names like Queen Esther and Shield of Abraham, the freewheeling buccaneers plundered and ravaged the Spanish fleet.

Almost 400 years later, Amit Mendel set out on a similar maritime voyage—save for the swords and daggers.

An itinerant Jerusalemite artist with a shared studio in the timeless Mea Shearim neighborhood, Mendel has long traveled the world, hitchhiking from port to port in journeys crisscrossing the globe. He frequented Europe and Russia in search of work as a performance artist, and sometimes, “I would arrive in some city, rent an apartment, and draw,” Mendel tells Chabad.org.

To traverse the oceans and seas, Mendel would typically hitch rides on various boats, offering to assist with the sailing. In December 2019 Mendel found himself on Spain’s Canary Islands, off the coast of northwestern Africa, with Mexico set as his next destination. There he linked up with a Scottish sailor at port sailing for St. Lucia, West Indies, and set out for the month-long journey, together with four other crew members. They made it there, and the lone artist spent a month on a deserted St. Lucian beach until meeting a German family and hitching a sail with them to Martinique, a French island 50 miles north of St. Lucia. In Martinique he met a band of wanderers and they set up camp in the jungle. After a month of jungle-living, Mendel stumbled across an experienced Italian seafarer wishing to set sail for Cuba.

A short while into their voyage, they were hit by a fierce storm. Mighty waves lashed their tiny 40-foot vessel, lifting them high into the air and crashing back down. The Italian, it turned out, wasn’t the expert sea dog he’d presented himself to be and fell violently ill, leaving Mendel now to sail the badly-damaged boat to safety on his own. He finally made it to the Dominican Republic, the boat by this time hardly seaworthy. He left the Italian mariner and went on his way, in search of a Mexico-bound vessel. 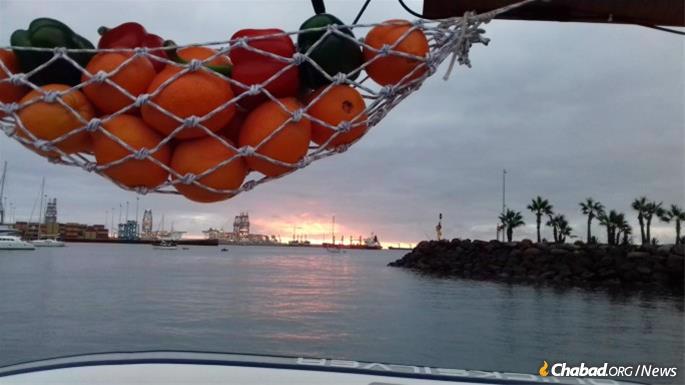 Mendel aboard a boat in St. Lucia harbor early in the ordeal.

From Prison in Paradise

Then the coronavirus crisis hit.

With no other choice, Mendel returned to his Italian companion, and the pair headed for Cuba. After applying for visas, however, he received word that Cuba’s borders were shut. He made contact with Israel’s ambassador to the Dominican Republic and set out to return to shore. “The army aimed their guns at us and barked at us to leave,” Mendel recalls. The Dominican was no longer an option. Hoping that Jamaica would be open, they ventured out to sea once more. The two-day trip took them five days, while they only had provisions for two. By the time they got there, Jamaica had followed suit and its borders closed just as they arrived. Mendel now found himself stranded on a small, creaky vessel in the Caribbean Sea, with supplies dwindling fast.

Food and water were soon depleted. “We only had rice left, and relations between us weren’t in a good state,” he adds. The Italian forgot the PIN to his credit card, and Mendel’s card wasn’t working, so they couldn’t have the police deliver them a supermarket order, as was being done for several other stranded boats. “The situation was so bad physically and mentally until I simply swam to the coast of a small island in the bay, where there were coconuts, bananas, and mangoes growing wild.” The resourceful young artist built himself a raft crafted with reeds to haul his life-giving fruit back to the boat.

“All this time,” Mendel notes, “I was in constant contact with Rabbi Yaakov Raskin,” director of Chabad-Lubavitch of Jamaica, “who was sending me food parcels, and the [Israeli] foreign ministry, which was asking the Jamaicans to allow me entry.” 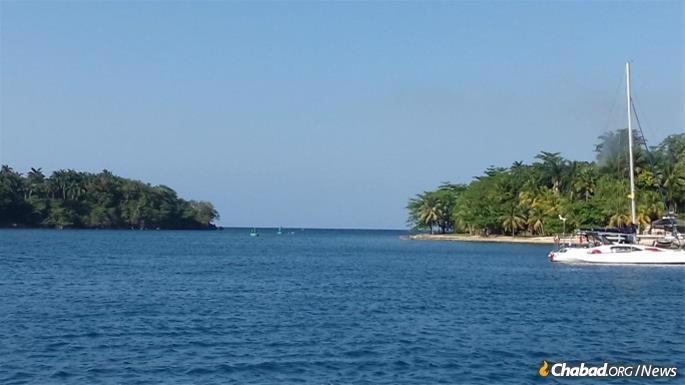 “I can see land, a beautiful island, but I cannot go there.” (Photo: Amit Mendel)

All of this would be difficult enough during regular times, but Raskin, who established Chabad of Jamaica with his wife, Chaya Mushka, in 2014, was himself stranded in New York, has come for a brief visit in March only to discover that he temporarily could not re-enter Jamaica. And so, with the vital assistance of Jamaican Jewish community member Shalom Hadora and his son—Israelis who live on the island—Raskin was able to direct Mendel food and care packages, including matzah for Passover, and SIM cards so Mendel could keep in touch with the outside world.

So passed a month-and-a-half.

On April 1, Raskin received an email from Mendel thanking him for the food and help, but inquiring whether Chabad was able to assist him with entering the island. The rabbi reassured him that the borders were set to reopen in several days, as there was only a two-week closure. But two weeks turned into another two, and another until the government announced that its borders were shut until June. 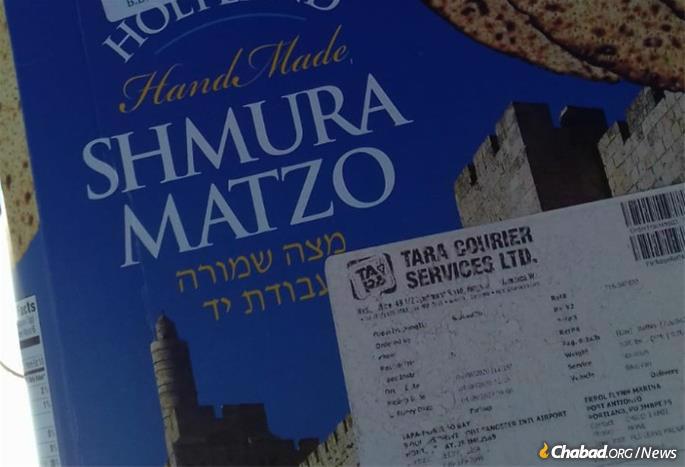 Rabbi Yaakov Raskin enlisted the Jamaican Jewish community in sending care packages to the stranded artist, including matzah for Passover.

Meanwhile, intense diplomatic efforts were being made by Israel’s ambassador in the Dominican Republic, whose portfolio includes the entire Caribbean. Ambassador Danny Biran needed to get Mendel on a flight to Israel, but there weren’t any commercial ones operating out of Jamaica, just occasional repatriation flights. To get to Israel, he would have to fly through the United States, but Mendel had no U.S. visa. Biran and Ainsley Henriques, Israel’s honorary consul in Jamaica and a Jamaican Jew for several generations, managed to secure a visa for him, but Mendel would need to enter Jamaica to receive it. The Jamaicans acquiesced, on condition that he would immediately return to his boat upon receiving the coveted visa. A stipulation that brought them back to square one.

Biran, Henriques, and the Israeli foreign ministry continued working diplomatic channels, but to no avail. “We’ve done all we can,” he confided to Raskin. “We need to find another path to the Jamaican authorities. We will never leave Amit alone.” 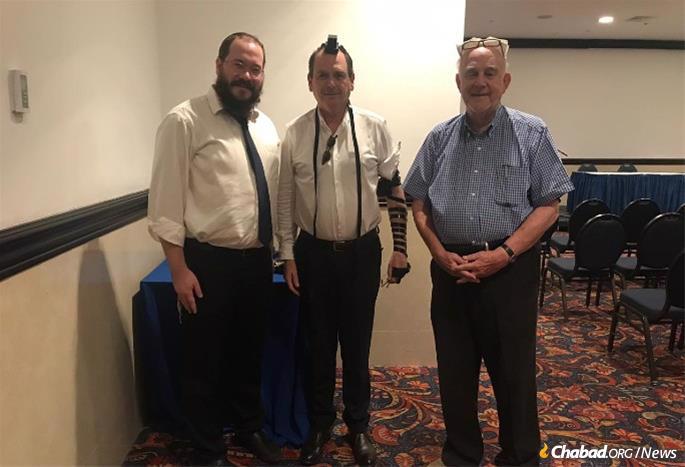 Mendel’s life was in danger. Stranded for weeks and in a devolving mental state on a tiny boat with nowhere to run and an unsavory shipmate, the situation was becoming more and more dire.

“We had to save Amit’s life,” says Raskin. “His parents were afraid of the worst.”

“It’s like being in prison in paradise,” a distressed Mendel reported to Raskin, who called him daily throughout the entire saga. “I can see land, a beautiful island, but I cannot go there.”

Raskin began contacting every government minister he knew, as well as an influential lawyer who had assisted Chabad in the past. On the spiritual front, on May 8, Pesach Sheni, Raskin penned a letter to be sent to the Ohel, the resting place in Queens, N.Y., of the Rebbe—Rabbi Menachem M. Schneerson, of righteous memory—beseeching the Rebbe to intercede on high. Within two hours, that every Friday afternoon, the lawyer was on the phone with the rabbi reporting that the authorities would allow Mendel to escape his confinement and reach their safe shores. 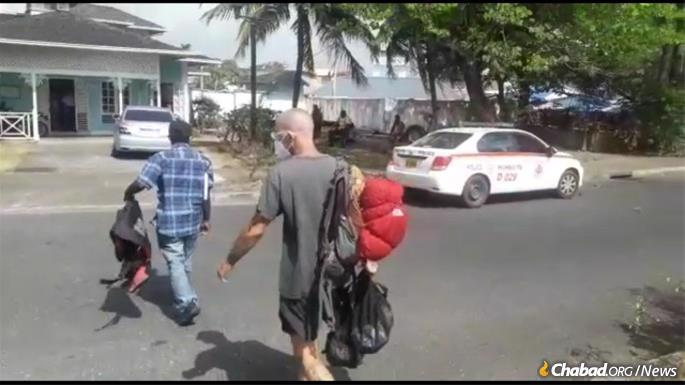 Mendel arrives on dry land after being stranded off the Jamaican coast for a month-and-a-half.

Quarantine, Tefillin, and a Prayer

Hadora, the local Israeli community member, provided an empty house for the artist to be quarantined in, while authorities posted a guard at the entrance, ensuring he would be in strict quarantine. Honorary Israeli consul Ainsley Henriques assisted him with much of the logistics, helping him disembark and get to the house. Fortunately, Mendel didn’t have to wait long for a flight, as a plane would be leaving on Wednesday, bound for New York.

Mendel would have to spend 24 hours in transit before his onward flight home to Israel, so the rabbi suggested that Mendel meets with him in Brooklyn’s Crown Heights neighborhood, where Raskin was staying. Still recovering from his harrowing ordeal, Mendel was only too happy to meet the rabbi. Raskin took a mask-clad Mendel for a visit to the Ohel, where he could pray and thank G‑d for his kindness at the holy site.

As Raskin helped Mendel wrap tefillin and recite a prayer, Mendel, overcome with emotion, took upon himself to wrap tefillin each weekday, his way of repaying G‑d. Back in Crown Heights, they headed to a local scribe, who opened his office especially for them so they could purchase a brand-new pair of tefillin. On the way, Raskin bumped into an old friend who, upon hearing Mendel’s story, asked to sponsor the pair of tefillin. 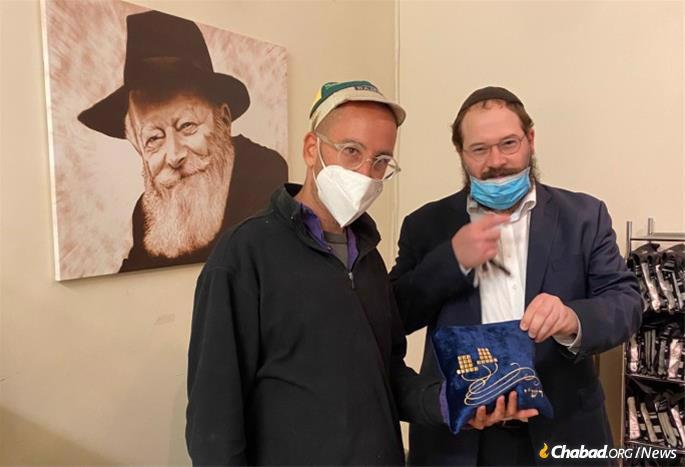 A scribe’s office in Brooklyn opened especially for the rabbi to purchase a brand-new pair of tefillin for Mendel.

Mendel says that his ordeal has not only strengthened his faith but his resolve. “Don’t give up. Even when you have no idea what’s going to happen, trust in G‑d, and we’ll all be alright. Have confidence—in yourself and in G‑d.”

After Raskin thanked Biran for his efforts, the ambassador responded in kind, saying, “It’s all of us together, rabbi.” The Jewish people have a special bond with one another, he noted. It’s “a battle for each person … .”

The ambassador tells Chabad.org that “everywhere I’ve served in my line of work—be it Peru, be it Thailand or anywhere else, there has never been a time that I’ve turned to the Chabad emissaries in a quest to help a fellow Jew and not received an immediate response, from the heart, happy to help. They are a great honor to the Jewish people.” He adds, “There is no one like Chabad.” Mendel took it upon himself to wrap tefillin each weekday. It is his way, he says, of repaying G-d.  Mendel says a prayer thanking G-d for his kindness at the Rebbe’s resting place.