Kosher Food and Shabbat Arrive at World Cup in Qatar

Jewish visitors line up for bagel sandwiches during the week

More than 400 freshly baked challahs were enjoyed by Jewish fans and officials at the World Cup in Qatar this past Shabbat. Baked in a kitchen specially koshered by a young Chabad-Lubavitch rabbi from Turkey, it’s part of a month-long effort to make kosher food available at the games, which began last week and continue until Dec. 18.

On the page, the young rabbi shares photos of the many kosher items available locally in Qatar supermarkets—such as condiments, tuna, cereals, soy milk, and a variety of classic salty snacks. He’s quick to respond to messages inquiring about kosher food and Jewish needs and directs the Jewish travelers to his hotel kitchen where they can pick up fresh meals.

The main culinary attraction is bagels delivered with kosher certification and a list of sandwich ingredients: roasted red capsicum, olives, tomato, cucumber, rocket salad, garlic, parsley, and olive oil. For travelers who keep kosher, the freshly-made food is an exciting break from the canned food and dried goods brought from home, and Chitrik gets to see the difference the kosher kitchen makes for them every day. “People are just relieved and excited to see that they can travel and have some fresh kosher food,” says Chitrik.

“We asked several rabbis about kosher food in Qatar,” says Bercho Frydman, who traveled to Qatar from Israel with his brother, Toby. “They directed us to Chabad, where we met Rabbi Eli Chitrik.”

Bercho says the experience of taking part in the first kosher food experience in Qatar has been amazing and filled him with Jewish pride. “The Rabbi helped us with all of our questions, and provided us with bagels for the week, and challah for Shabbat—both very tasty. He also gave us challah to bring to our Jewish friends who came from Mexico, they were thrilled to have challah for Shabbat! We are very grateful.”

By now, the kosher kitchen has served about 100 bagel sandwiches each day and up to 400 challahs were given out on Friday, for Shabbat. They expect the number of daily consumers to increase over the duration of the World Cup as word continues to spread. The unusual kosher service doesn’t have prices—food is offered entirely free–but donations to help cover the expenses are welcomed.For the young rabbi supervising the effort on the ground, it’s been an exciting experience, and in some ways a familiar one. Rather than hiding his Jewish identity in a Muslim country, Chitrik can be seen walking around the Qatari streets with his tzitzit hanging out, and Chassidic black hat on his head—either that or a bright orange and blue kippa. He stands out in the crowd as visibly Jewish.“Many Qatari locals and others stop me all the time, to ask about my tzitzit or other things about Judaism,” Chitrik says. He insists that it’s completely safe to walk around Qatar as a Jew and that he’s only had great experiences with the locals. “It’s important for Jews to feel comfortable walking around anywhere in the world,” he says. 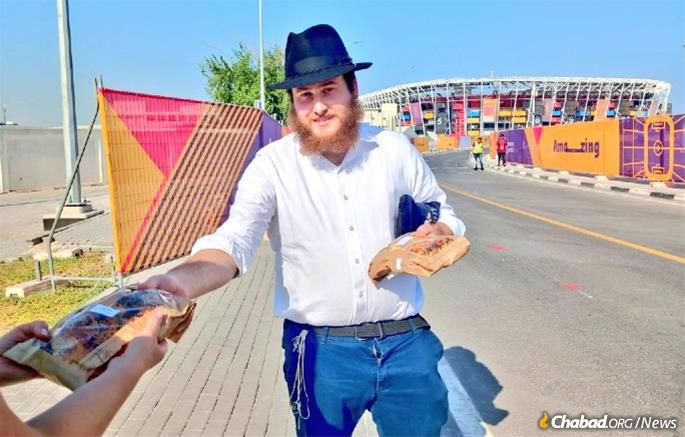 On the streets of Qatar with black hats and tzitzit, Chitrik distributes challah before Shabbat.

The kosher plan was cooked up when Rabbi Marc Schneier, who runs longstanding programs in the Islamic world, called Rabbi Mendy Chitrik, rabbi of Istanbul’s Ashkenazic community and chairman of the Alliance of Rabbis in the Islamic States, to discuss bringing kosher food to the World Cup.

“The Rebbe [Rabbi Menachem M. Schneerson, of righteous memory] gave us a mission to help Jewish people keep kosher,” says Chitrik.” So the two set out to establish the first-ever kosher food service in Qatar.

Schneier worked with Qatari authorities to obtain the permissions and facilities needed, including a kitchen provided by Qatar Airways. Chitrik, who is an experienced kashrut supervisor and authority, got straight to work planning the logistics.

“We chose to make bagels because it’s easiest, the raw materials are available readily and just need to be checked,” says Chitrik. Kosher meat and dairy would be more difficult to obtain in Qatar, which does not have a permanent Jewish population. The duo was also unsure of how many people they would be catering to, so they avoided any big expenses or investments, and instead went with familiar Jewish staples.

“We remain simple but ethnically Jewish. We have bagel sandwiches, and challah for Shabbat.”

There’s another element that excites Chitrik, as a rabbi in an Islamic country. “It’s a cause that brings peace between people, it shows the openness of the country and readiness of the Muslim population to let Jews practice their Judaism. The Qatari authorities are pushing this project and have been very helpful with it all.” 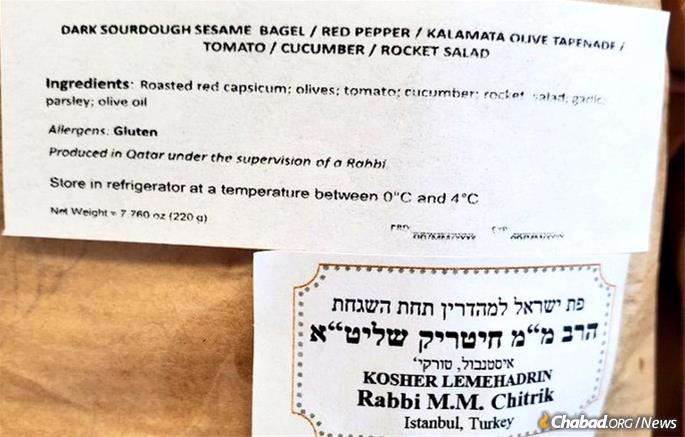 Sandwiches come with a kosher certificate.
So far the kosher kitchen has served about 100 bagel sandwiches each day and up to 400 challahs were given out on Friday, for Shabbat.
Eli Chitrik expects the number of daily consumers to increase over the duration of the World Cup as word continues to spread.
By Bruria Efune (Chabad.org)

The U.S. and the Holocaust